An independent film that boldly goes into a predictable but fully-engaging trek of self-discovery...

Wendy Welcott (Dakota Fanning) is a young woman with emotional problems, living in a San Francisco community house run by the often over-worked but always caring Scottie (Toni Collette). Wendy has her careful daily routines involving chores and an undemanding job serving complimentary pastries at a local fast-food outlet a couple of streets away. Her daily escape from the real-world is her love of all things Star Trek and she has been channeling that passion into writing a fan-script for an official competition that Paramount are running.

As the deadline for entry looms, Wendy’s own world starts to wobble as it becomes clear that her older sister  – and new parent – Audrey (Alice Eve) doesn’t feel able to take her in as hoped and Wendy misses the last day to post her carefully-typed script. Knowing that winning the competition would not only give her the money to make her own decisions but also prove to everyone she’s smart and talented, Wendy is faced with a simple choice…. forego the competition and live her life as before, or break her rules and routine and deliver the script to Paramount herself.

After all, if she can walk to work, how difficult could it be to get to Los Angeles?

Adapted by Ben Lewin (The Sessions and the upcoming The Catcher was a Spy)  from the play by Michael Goalmco, it’s true that there’s an inherent sense of whimsy on show and the logical dangers such a character would encounter on such a journey are somewhat prone to be archetypes – but it’s more a case of the film speaking to the journey not the destination – the paramount importance of Wendy’s efforts rather than the Paramount Pictures lot she’s heading towards.

As someone who regularly deals with people who have emotional or communication problems, I have to say that the representation of a character with such needs is handled pretty well. Fanning, already a screen veteran, is only 23 but is showing her range by taking roles like this while currently playing a very different and adult character in TNT‘s The Alienist. Here, she excels in a part that could easily have been condescending and one-note in lesser hands. Though it’s never formally described as autism, Fanning’s Wendy is more than what could have been portrayed as a collection of award-bait ticks and eccentricities – she’s smart, opinionated, creative and caring but also someone who simply has a hard time coping with the speed and stimuli that the modern world throws at her on a daily basis. She’s like all of us on our worst coping day but always trying to be the person we are on our best.

While the ‘hook’ of the piece is the Star Trek connection, one can easily enter the world of Please Stand By… with only the briefest of knowledge about the franchise. This is a production about someone finding a safety-zone element of fantasy to deal with the mundane and could just as well be Lord of the Rings, Sailor Moon or The X-Men. If you’ve ever heard of Spock and Kirk, then you’re essentially good to go. That said, there are affectionate nods and name-dropping of franchise elements and Patton Oswalt’s caring cop – who uses his knowledge of Klingon to calm Wendy – is a delightful piece of fandom-embracing expression that feels well-placed rather than simply a stunt.

Collette, another often under-valued actress of great range, is somewhat typecast once more in the caring-but-frustrated guardian role, Scottie (the film conscientiously avoiding an obviously-anticipated line of dialogue). However she now knows the territory and goes ‘reliably well’ rather ‘boldly surprising’. She’s also getting rave reviews for the upcoming psychological thriller Hereditary at this year’s Sundance Film Festival so there’s something further to anticipate there.

British-born Alice Eve could have been little more than meta-stunt-casting given her largely eye-candy role in the Star Trek movie relaunch with J J Abrams in 2013, however she is another actor whose résumé is rapidly filling with impressive projects. Here, she convinces, both physically and in mannerisms, as Wendy’s older sibling, a person genuinely trying to weight the responsibilities of parenthood with her inability to help Wendy directly.

If Please Stand By… is occasionally a little safe (despite her impromptu walkabout and encounters with the good and bad people en route, there’s rarely a sense of real danger in Wendy becoming a CSI-victim or a Jane Doe statistic) then it’s the singular emotional peril that keeps you engaged – actively and unashamedly championing someone who desperately wants to be normal without sacrificing the special. Yes, for better or worse, it screams ‘independent’ movie sensibilities with all the passion a Pon-farr Vulcan can muster, but you’d have to be a grumpy Romulan not to rooting for her.

With the likes of new dark-and-grittier franchise show Discovery, the affectionate comedy-drama The Orville, the recent meta-textual Black Mirror epiosde and news that Quentin Tarantino is turning his hands to the franchise’s next big-screen outing, it’s undeniably a good time to be a Trek fan. Please Stand By… does nothing to slow that momentum and so, when all is said and done, one can only humbly offer that: qaStaHvIS yIn ‘ej chep qotlh mIllogh qonwI’ qoSta’

Please Stand By... is now available on DVD in the US. No UK cinema release or DVD release has formally been announced. 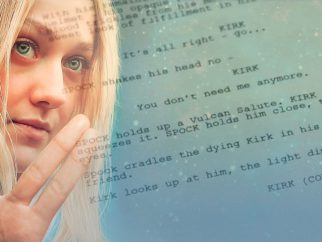