The Karate Kid is back, but thirty years on and onto the internet, it seems that Daniel Larusso and the man he once beat may both have a lot left to learn....

Over thirty years ago, Johnny Lawrence (William Zarba) was a up-and-coming martial-artist, learning his technique from Kreese (Martin Kove), the sensei of the local Cobra Kai judo. But Kreese was ruthless and in the end both Johnny and Kreese found themselves on the wrong end of a more responsible, elderly martial-artist Mr Miyagi (Pat Morita) and his bullied underdog student Daniel Russo (Ralph Macchio). The award-winning championship pounding that Johnny took is one that he has never really recovered from.

Since then he’s just about weathered everything life has thrown at him:  an unsuccessful marriage, an estranged son, a series of handymen jobs and the bums-rush deal of many an opportunity. He’s grown accustomed to it, quietly resentful but resigned and is happy to keep himself to himself. But when a new kid moves into his apartment block on the very day that Johnny is fired from his job, things take a fateful turn. Stepping in when bullies throw the new kid against Johnny’s car, he defends his property and the boy.  His muscles may ache more than they did when he did karate on a more regular basis, but he manages to send the bullies off into the night – though he gets arrested for his trouble.

But could the one skill he has be a chance at redemption?  Could he resurrect the infamous Cobra Kai dojo and teach some of the kids of today a more… dynamic, pro-active way to handle bullies.  Strike First. Strike Fast. No Mercy. It sounds like a good idea to him…. but when Daniel Larusso – now a successful car-dealer using his karate-kicking image as a selling tool and with his face staring down from countless billboards –  gets wind of his plans, he determines to make sure the darker legacy of the dojo never rises again…

To those of us of a certain age, the original Karate Kid films (or at least the first two) were something of a rite of passage. Daniel Larusso (Ralph Macchio) was the young kid moving to a new town and falling foul of the local gang and thug who ran a militaristic dojo. Instead, he learns the more honourable way of combat and defending himself via Mr Miyagi (Pat Morita) and, in the end, triumphs over adversity. It was a rallying call for the underdog, a Rocky  for those who’d ever felt bullied… and probably the best advertisement for martial arts for an entire generation that had  had only had until then posters and obscure Bruce Lee and Jackie Chan imports to find in video store shelves.

Cobra Kai  is able to stand up straight with its own dojo mojo. The idea of flipping the dynamic – of having Johnny as a flawed guy trying  to do something right (at least in his own mind) and Daniel as the guy whose ego has arguably got the better of him, but is also trying to do the right thing…. is what makes this whole endeavour interesting from the get-go…

In an era where everything old is new again and almost everything is getting rebooted, re-imagined or retrofitted, the news that the Karate Kid would get a bonafide modern entry was something of a mixed martial-arts blessing. Ralph Macchio had developed a Shatneresque realisation that he’d never escape the shadow of his iconic character, but he and William Zabka were largely seen in roles that homaged the original movie or in metatextual cameos (see How I Met your Mother  and in No More Kings‘ reverential video for Sweep the Leg). Though the story remained timeless and ripe for revisiting, the Jaden Smith / Jackie Chan remake had none of the original’s charm. So, in some ways the idea that Macchio and Zabka could actually return and  take the franchise ball and run with it to an official degree as a proper dramatic entry seemed both like fair play to them and a potential in-joke too far.

But what could have been just a one-note, self-serving production relying solely on nostalgia, actually turns out to be a bit more. Yes, the new  YouTube Red-based series no doubt benefits from – and deliberately pivots towards – an audience somewhat familiar the source material (and those who aren’t, get helpful flashback clips) with the jokes and deliberate callbacks scattered through its story. But Cobra Kai is able to stand up straight with its own dojo mojo. The idea of flipping the dynamic – of having Johnny as a flawed guy trying to do something right (at least in his own mind) and Daniel as the guy whose ego has arguably  got the better of him but is also trying to do the right thing…. is what makes this whole endeavour interesting from the get-go. It has all the values of the original, but more nuance and mileage for its two leads.

There’s a lightness of touch to attract the modern CW-raised audience with plenty of pearly-white smiles and a ‘next generation’ ensemble of perky, racially-diverse  photogenic kids needing to learn some life-lessons – all placed as a counterbalance to the older, cynical parents.  But the series has the right kind of momentum – switching between the  peer-pressure problems of being a teenager to the domestic decisions of its two main leads and presenting most of them as well-intentioned people who can be their own worse enemy in the way they react. Essentially:  Johnny is trying to claw his way up to success and Daniel is trying to deal with having it.

Given the fact that this is a web-series – a major venture for YouTube-Red –  there is some latitude with language and content. While most of the story is all-ages (or at least teenager and upwards), there are moments when that flexibility gets flexed and there are a handful of  hand-job jokes and sex  references and probably needless f-bombs that find their way into proceedings later in the run. They are unlikely to offend, but also seem superfluous to requirements.

All in all, the web-series is impressive, making all the right moves and executing them much better than could have been reasonably expected. It’s a love-letter to the past, but with enough flair for modern audiences and enough production value and passion for it to have made it to network primetime and still held its own. 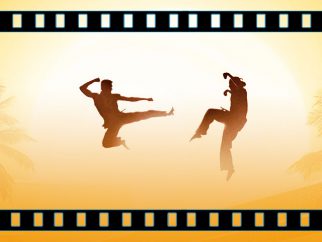