Never-ending storey? A film based around some real life legends and property is prepared to go to Helen (Mirren) and back...

Compromised and soon-to-be-impoverished psychiatrist Eric Price (Jason Clarke) is beginning to wonder whether his own addictions may have been the downfall of an otherwise respected career but he is approached to evaluate the mental state of Sarah Winchester (Helen Mirren), the widow of the man who created the famous gun-manufacturing business. The board, ‘worried’ by Sarah’s mental state are looking for a way to take control of the company and are willing to pay Price a significant sum for his services – especially if he could find in their favour.

Sarah lives in a big estate and home that keeps getting bigger as she orders the construction of more and more rooms, so much so that the house looks like a jumbled collection of irregular boxes and strangely twisty corridors. Price sees his weekend stay at the house as likely to be a formality in his evaluation – after all, Winchester is clearly troubled. When he hears her reasons for constantly extending the house and the redemption Sarah seeks for the many deaths caused by the company’s weapons, he’s about to sign-off for the company’s benefit – after all… is it remotely likely that the ghosts of the dead really tormenting the living?

But when Price experiences some of the visions that Sarah has warned of, he may be forced to not only reevaluate his diagnosis, but struggle to survive the weekend itself…

Winchester‘s central remit of taking slight elements of real-life legend and building a largely fictional spectral solution around it all could easily have resulted in an inferior, cheap made-for-television venture.  (There is a real-life Winchester house, Sarah Winchester did indeed express regrets about victims of the company’s products and, yes, built a plethora of rooms beyond normal, reasonable realty-checks. Various legends regarding restless spirits have subsequently  brought tourists and ghost-hunters to the site).  The new film essentially slams all those aspects together for the sake of a spooky story with a range of things that go boo in the night. Though it plays to a whole range of familiar pacing and tropes, it’s all executed with enough style to make it an enjoyably effective in the moment if not hugely memorable in the long term.

Any production starring Helen Mirren automatically obtains a certain degree of credibility and style and though this outing doesn’t exactly stretch her abilities, the veteran actor doesn’t disappoint. Mirren can smoulder and snark as needed for any particular venture and its the latter that is employed here for her turn as the smart-as-a-whip but frustrated matriarch desperately trying to fend off threats both supernatural and all too human. As an actor and character she’s clearly a force to be reckoned with and strikes the right balance between someone scared and stubborn in the face of adversity.

Jason Clarke is rapidly becoming a character actor of note – his past credits include the often underappreciated television series The Chicago Code, the big-screen ventures such as Dawn of the Planet of the Apes, Mudbound and Everest and the current Ted Kennedy biopic Chappaquiddick, where he plays the in/famous politician. For Winchester he gets his teeth into a part that may be the male lead but is largely reactionary to events. Yet to his credit he gives Price a sense of dignity and pathos and manages to sell the idea of a man who is not only changing diagnosis but genuinely trying to do the right thing despite himself.

There’s able support from the likes of Sarah Snook,  Em Wiseman and Finn Scicluna-O’Prey as the young Henry and a feeling that the directors (the Spierig Brothers, who previously worked with Snook on the hugely impressive sci-fi outing Predestination) have made the very most out of the budget and talent involved in front of and behind the camera.

No better or worse than a solid ‘haunted house’ story, Winchester lock and loads all the requirements of the genre and has a firm enough foundation to provide both a building and a plot full of spooky storeys and sufficient scares. 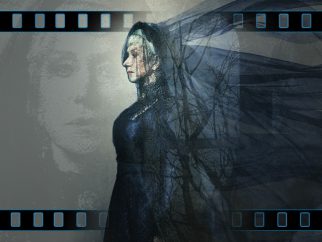