Netflix cleverly launched their new 'Cloverfield' sequel after the Super Bowl. Was it a monster success or not?

High above the Earth a space-station valiantly tries to get its energy-source and particle beam working, hoping that it will put an end to the geo-political tensions on the planet below. Time after time, those efforts fail and the crew, still in space after two years of what was supposed to be a six-month mission, are on the verge of fracturing along idealistic and political affiliations.

Finally, the experiment seems to work, but when the power-source overloads the repercussions appear to defy physics and sanity. With the station seemingly adrift far from home, it soon becomes clear that things and people are appearing on the station that shouldn’t be there and  bulkheads hide hidden secrets.

As the truth of what’s happened slowly becomes clearer, what choices will the crew make and how will it affect the planet they left behind?

Many years ago I found myself at Shepperton Studios on a very impressive set for what looked like a potentially-great sci-fi film, one that was half cosmic thriller and half psychological conundrum.  The eventual release of Event Horizon was not really the spectacular end result hoped for – nice-looking in production design, reasonably serviceable in story but one that contemplated its own navel with black hole wonder and never really stretched to the outer limits for which it was aiming…

Almost all of that is equally true for Netflix‘s stealth-release of The Cloverfield Paradox, the film which – as ‘The God Particle‘ – was due for a spring cinema release and then suddenly got a post-Super-Bowl upload to the streaming service instead.

The Cloverfield saga sprang from the original 2008  film which used the found-footage aspect as the gimmick on which to hang a monster-movie. There was a sequel of sorts with 10 Cloverfield Lane in 2016, a story repurposed from a totally unconnected script which revolved around a person being held against their will in a bunker from an apocalypse that might or might not be happening above.  Once again, The Cloverfield Paradox takes an idea that really has very little to do with the original and retrofits it to fit into that universe in some tangential way.

One has to genuinely applaud Netflix for a marketing ploy and release strategy that ultimately got them more eyes on their film than might otherwise have bought tickets or casually selected it from an online menu.  With no real time for reviews (the film hit the streaming service within hours of the announcement) the movie became must-see with no contradictory or critical counterbalance. It had all the advantages of the Cloverfield franchise hook and none of the immediate baggage

That baggage is more obvious during and after viewing. Though competently-executed in and of itself, there’s nothing really new on show here – several disparate ideas spun together around a handwavery centripedal core that’s more technobabble than tech-savvy. Almost every key scene in The Cloverfield Paradox homages the well air-locked corridors of the genre. While Event Horizon is the closest cousin, there are moments of both inferior sf outings and better ones such as Gravity,  2001: A Space Odyssey, 2010, Supernova and Alien – the latter at least being echoed in a key scene which has the courtesy to add a degree of humour.  The cast, like the story, is a raft of elements picked to show breadth. None of them are quite A-List but all well-picked for their characters.  Previous Oscar-nominee and ex-Spook David Oyelowo is the mission commander Kiel, Daniel Brühl (currently in The Alienist) is German tech Schmidt; Zhang Ziyi is Tam, Aksel Hennie plays Russian Volkov,  John Ortiz is the doctor, Monk and ‘Mundy’  is essayed by Chris O’Dowd.  Dowd, as is often the case,  gets the best self-deprecating one-liners and perhaps saves one of the most ridiculous scenes (involving a dismembered arm) by acknowledging just how stupid it is. There’s plenty of different accents and ethnic diversity on show, but  while most characters appear admirably bilingual it’s notable Ziyi doesn’t get a single word of English.

After a reasonably interesting set-up, the second half of the movie flounders, playing more to less interesting set-pieces and obligatory gruesome deaths… and one has to wonder if the Netflix release strategy plays as much to that realisation of its probably limited box-office potential as ‘daring’ Super Bowl stunt. Without that the film is largely exposed as a run-of-the-mill sf entry and its connective tissue to the wider franchise is stretched notably thin to pad out time and promote it.

Diverting and watchable, but largely forgettable, this latest Cloverfield also underlines the flimsiness and strength of the entire franchise – that any film can be made to fit its vaguely-defined canvas… 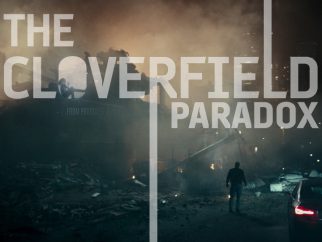