The accënt is on the cold rather than the calculating in a Norway-based thriller that's snow-adrift in its pacing and direction...

Oslo police detective Harry Hole (Michael Fassbender) wakes up in a cold park on the edge of the city after a bender of week-long proportions. Arriving at work, his superior notes that this downward spiral can’t continue or be covered up much longer. Harry needs to get his act together and wants a case to occupy him. Newly-arrived investigator Katrine Bratt (Rebecca Ferguson) finds Hole edging in to her own case and she tolerates his unofficial partnership because of his reputation as a crime-solver.

But when it becomes clear that the case, involving a missing woman, might be linked to several other disappearances and murders, the case becomes more urgent. At the home of each woman, a taunting snowman is left outside and Harry himself starts to get notes from the killer.

Trying to balance his estranged home-life and work duties, Harry tries to piece together the tactics of the killer, but his col-blooded target is about to strike close to home…

The Snowman should probably carry a (weather) advisory warning that good books do not always make good films – especially when you erode them down to basics and expose them to the elements. Though the film packs out its running time with familiar faces, none are able to save it from a sub-standard, sub-zero result.

Fassbender has long excelled in broody, troubled loners and The Snowman essentially asks him to do more of the same though never really gives him any deeper resonance than the job description. He’s supposed to be a legendary intuitive cop who has fallen off the wagon, but while we see him chasing that wagon, we see very little of the profound insights. He asks basic, decent questions and by the time any major twists come along, the audience has probably worked much of it out for themselves. Mission Impossible: Rogue Nation‘s Rebecca Ferguson as his somewhat reluctant new partner Katrine Bratt  is probably the most dynamic character in the movie, but that’s a low benchmark and though there’s a promising start, her detective is ultimately sidelined in service to the climax.

For a film that boasts an enviable cast, many of them familiar British actors, almost all are wasted in roles that are beneath them. That’s not to say that the ensemble itself is lacking or dreadful in their singular performances, merely that the story plods along (making two hours seem double in length) with material and production values that seem more akin to a tv movie rather than a more engaging, major release the name-factor would usually indicate. J K Simmons (currently in the marvellous Counterpart) and Charlotte Gainsbourg have some key scenes, the former with a strange mid-Atlantic accent, but are on screen far too little. (It’s almost as if Fassbender and Gainsbourg – most recently known for more edgy, controversial and provocative output – decided to take one for the wallet). The likes of acclaimed actors Toby Jones and Chloë  Sevigny turn up early in scenes and one presumes this will lead to more important revelations, but – no – they speak a few lines each and then disappear into the cold with scarcely a trace of ever being there. Performers such as Genevieve O’Reilly and James D’arcy have more words but fare little better.

Most inexplicable is Val Kilmer turning up in several rather pointless and askew flashback scenes, bloated, strangely-coiffured and quite obviously dubbed. It’s possible that some of these elements were because Kilmer has since admitted he was fighting a private throat cancer battle in the last few years, for which we all wish him well, but the blunt result is that the already uneven movie suffers from those awkward unnecessary scenes that add nothing to the bigger picture.

It would seem that Norway exists in a state of perpetual winter and the cinematography points towards every mix of bleak, grey suburban structure and counterpane of desolate, icy roads it can manage. Director Tomas Alfredson  managed a similar trick, to better effect, in the original Let the Right One In but here its more monotonous than atmospheric.  The iconic stern-faced snowmen of the title, left as markers,  are not as important as you might think and actually have less scare value than a Christmas Doctor Who experience

Alfredson has since blamed the frosty reception for the film on a shortened shooting schedule (a quicker start-date than anticipated and then not enough time on location in Norway). He said that they didn’t get to even shoot between 10-15% of the intended script and told the Norwegian Broadcasting Association that ‘…when we started cutting we discovered that a lot was missing. It’s like when you’re making a big jigsaw puzzle and a few pieces are missing so you don’t see the whole picture…‘ which surely seems like exactly the factors for which he should have had responsible oversight.  It’s possible that the all important connective tissue that would fill in those blanks remains on the cutting-room floor and saved the movie – though it feels unlikely – but they aren’t much use to the viewer while they remain there, either way.

Nesbø’s Harry Hole novels has been going strong in the printed form for some time now and it’s likely that we’ll see another adaptation attempted at some point, though it’s unlikely anyone here will be involved. For now, the trail has gone cold and Hollywood, consistently managing to flail about in its efforts to reproduce and repopulate Scandanavian hits with English and American talent, has once again failed to crack the Norse code it so desperately needed if it was going to  turn up the heat..

The Snowman  is released by Universal Pictures Home Entertainment on 19th February (UK) and is already released in the US. 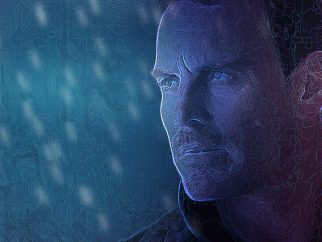 Logo/police? BBC Doctors the Who font…