The pilot episode may wear its genre markings all over its school sleeve, but it might be wise not to dismiss Class too quickly...

Coal Hill Academy, a shiny steel and glass structure built on the site of the previous bricks and mortar school has always been a magnet for… something other.As far back as sixty years ago it was attracting unearthly children and it seems even a wash and brush up hasn’t dulled its relative and dimensional attraction. In the corners of its clean, modern corridors there are still shadows and hidden dangers. The likes of new teacher Ms. Quill (Katherine Kelly) and ‘Sheffield’ student Charlie (Greg Austin) clearly have secrets. April (Sophie Hopkins) is determined to overcome her ‘sweet’ image, cocky Ram (Fady Elsayed) wants to live up to everyone’s expectations and Vivian Oparah’s Tanya is a prodigy wanting to be treated merely as an equal. They are all in for a rude awakening.

Before the school’s ‘prom’ is over, there will be blood, sacrifice, tears in time and a bond forged between people who wouldn’t normally have given each other a second glance…

Pilots are hard to master – having to quickly deliver an info-dump of set-up and characters – and so judging an entire run on its cramped first forty-five minutes is somewhat unfair. Class also comes with a certain expectations… a Doctor Who spin-off brings an amount of baggage and casts a long shadow, elements that this new show never quite feels whether to embrace or run from. . An ethnically-diverse cast is more than welcome but the pilot’s pace means that the lack of depth results in what feels a little like a template for demographic box-ticking. The pilot ticks off supporting characters who are gay, disabled a disabled character, there several easter-egg nods to the original school and the appearance by a certain Time Lord who speaks to the wonders of humanity (and aliens) working together. It’s a schedule more than a plot.

Yes, Class – now being shown on BBC3 which went online-only for its broadcasts earlier this year – knows its lineage and its inclusive message is front and centre and isn’t afraid to admit all that  in the dialogue itself. There’s not just the appearance of attack eyebrows in the first episode, but also overt, references to Buffy, Vampire Diaries and Once Upon a Time – which may raise a knowing smile in the short-term but pop-culture references also date quickly and too much ‘meta’ starts to matter. There’s no denying that Class IS adamantly trying to be the UK equivalent of Buffy – the initial press release already boasted that aim. It’s a double-edged stake.

There are two more inherent problems: The first episode  wears those influences on its school uniform sleeve just a little too starkly. The ‘Scooby Gang’ are here in all but name and Miss Quill is pretty much a female take on the muzzled Spike of later tv seasons. It’s not that the result isn’t enjoyable or effective, but older fans won’t be able to avoid the comparisons and may find the opener lacks an original spark of its own. If judged merely as the clone of Buffy, it suffers for trying too hard. It’s a fine place to start, but needs to plough its own niche beyond those familiar elements. This is less of a problem in the second episode where there’s a focus on consequences – the survivors of the first rift/bunghole incursion not instantly being friends and Ram’s blood-soaked experiences and injuries weighting particularly heavy. There’s some genuine  character development and that will be an imperative going forward.

Secondly, Doctor Who spin-offs have always walked a difficult path. The main show, though beloved, has sometimes been criticised for an inconsistent tone. The spin-offs have often sought to isolate one of the demographics for themselves, not always successfully. The problem with Torchwood was that for an ‘adult’ spin-off it was often  tacky and childish in its tackling of more ‘mature’ themes: a show that talked about how unimportant a person’s sexuality was and then spent far too much airtime desperately trying to be edgy about such. Its best season was its third, ‘Children of Earth‘ a mini-series that was brave and brutal story of human frailty, but otherwise it was an opportunity all too often obsessed and wasted with tabloid trappings.  The Sarah Jane Adventures, built around Elizabeth Sladen’s iconic titular companion and her new teen brigade, was a decent all-ages  romp anchored by Sladen’s undeniable screen presence and able to be a kid’s show that didn’t patronise its young audience. The death of Sladen in 2011 curtailed what might have become something even more given time and space.

But with obvious potential there in the mix, if not yet realised, all Class really needs to do to succeed is stop trying to be all things to everyone and decide in what it wants to ‘major’. You can’t have blood-splattering violence in one scene and and then play to easy, tropey, all-ages solutions and a hugfest immediately thereafter. Equally a drama set in a school (or ‘academy’ in new-age parlance) with an opening credits scene that feels like an LCD trip combining Doctor Who and the classic version of The Tomorrow People (perhaps no accident) indicates a certain ‘yoof’ intent. There’s minor swearing and semi-nudity on display, so this isn’t all-ages, but it doesn’t yet possess the narrative sophistication of anything you’d see prior to 7:00pm on the BBC‘s main channels. It feels like it wants to be the new Misfits, but can’t find something worth rebelling about.

The FX in the first episode are adequate for a television show, if not consistent. The alien bad guys stomping down corridors look like they’ve escaped from a end-of-level games release rather than a Hollywood blockbuster. The neon-hued armour works well enough in the pilot, but the glowing eyes feel a little cheaper and too retro. The ‘dragon’ effects of the second episode are also mixed, clearly CGI but probably stretching that budget as far as it can go for the time being. The show might do well to concentrate on mood rather than post-production monsters on a weekly basis.

At the moment, the show, like the ‘teenagers’ it represents, finding its way, experimenting and struggling with its identity amid trying to draw in the biggest crowd-pleasing ratings. Once it decides where its heart and soul lies (rather than marketing opportunities and tie-ins) and what it actually wants to be going forward, Class will have learned its own best lesson. 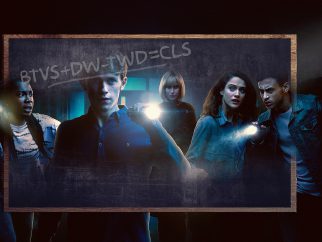