Traaaaains! The Korean zombie thriller 'Train to Busan' is on the right track to deliver on its horror potential...

Seok-woo (Gong Yoo) is a business-man, divorced and with such a focus on his work that he gets his daughter Soo-an (Kim Su-an) the same present two years running. This year, her only wish is for her father to take her to see her mother in Busan and so, balancing tablet, cell-phone suitcase and schedule, he tries to find a way to make the day work for everyone.

But it won’t… because unknown to either of them, life-changing, life-ending events are unfolding in the city. Their train pulls out of the station just as a mysterious but violent outbreak starts to take hold. Across the country what were thought to be examples of mob-violence turn out to be something far more horrifying.

The train is now on a one-way trip, speeding away from almost certain death. However, far from being a sanctuary, the carriages may well become a tomb as one infected victim brings the condition onboard and kick-starts a journey of chaos. Can Seok-woo, Soo-an and others they encounter on the train ( Ma Dong-seok as martial-arts instructor Sang-hwa, Jung Yu-mi as his heavily-pregnant wife Sung Kyung, Kim Eui-sung as ‘pragmatic’ businessman Yong-suk and Gwi-hwa Choi’s un-named but brave homeless man) find a way to save their lives without losing their humanity in the process?

It would be tempting to think there’s very little more to be added to the zombie genre that hasn’t already been offered up on a blood-stained silver platter. The Walking Dead,  Fear the Walking Dead, 28 Days Later, 28 Weeks Later, World War Z, Z Nation… there’s only so many ways you can present a circulatory-challenged, limb-chomping threat without it losing its impact and it feeling like you’re thrashing around with the remains of an expired equine. By the same token, the vampire genre has been around for over a century with no signs of being permanently staked and so there’s a solid counter-argument that you can return to the same themes time and time again as long as you know how to execute the undead with a certain flair.

If zombies had a pulse, the breakout Korean horror Train to Busan would have its finger on it. It’s true that there’s technically no ground-breaking twist and evolution of the genre here, but it takes various existing ingredients  and mixes them together with an assurance, skill and style from which some Hollywood releases could learn a thing or two. It also creates a genuine opportunity for old-school drama and tension with an element of humour and some raw, top-notch zombie action.

Like the train on which a majority of the action takes place, ‘Busan’ has a genuine momentum on its ongoing journey, building the threat up from a sense of slow dread to in-your-face mayhem on a large scale…

The film is less interested in the origins of the zombie outbreak than it is in the escalating effects. (However, you should seek out director Yeon Sang-Ho’s animated short Seoul Station which inspired him to expand the concept out for the live-action Train to Busan). Some releases veer widely between styles or tackle one aspect at the expense of the other, often ruined by a flaccid third act, but Train to Busan steers its journey trying to accommodate the various elements without ever losing sight of the whole or the destination.  Like the train on which a majority of the action takes place, ‘Busan‘ has a genuine momentum on its ongoing journey, building the threat up from a sense of slow dread to in-your-face mayhem on a large scale. The first real victim, seen in the trailer, is edge-of-your-vision, double-take stuff,  a station official felled just as he vanishes off-screen, but it doesn’t take long for that threat to move front and centre.

When it comes to that threat, the film doesn’t scrimp on its effects. Traditional blood and gore eventually litter the screen and carriage and the supporting cast of fellow commuters channel their inner rabid dogs with wide-eyed glee. CGI is used sparingly though amazingly effectively in wider-scale shots. The zombies of ‘Buzan‘ are of the World War Z variety: they move faster and as a mob. One moment, as they converge en masse in pursuit of a departing carriage, is like a scaled down version of World War Z‘s assault on Jersualem, a singular wave made of broken yet animated bodies almost becoming one as they flail in search of devouring whatever they can reach. Those coming for the splatter-factor and grand-guignol gnashing won’t be disappointed, but it’s good to see a film that doesn’t forget to tell a story as well.

Largely played straight and with corkscrewing tension amid scenes of utter chaos, there are still elements of humour and banter, a gallows humour amongst the destruction, staying just the right side of slapstick or camp and cleverly acting as release-valves as needed. Combining its all-out action with some of the social-comment and class-structure reminiscent of another train-bound, the under-rated Snowpiercer, Busan may paint the commuters’ prejudices and self-interest in familiar, archetype ways (some you are hoping to survive, but several are designed to be loathsome and you will find yourself hoping meet a quick and untimely demise) but it makes you care about them throughout. Put any group of disparate people in a literally tight spot and the drama comes naturally. You choose your friends, you might even choose your enemies but there’s far less opportunity – as any commuter will tell you – to choose the strangers you may find yourself next to in a crisis. From the likes of big-budget fare like Titanic ( a sinking ship) or more niche efforts like M. Night Shyamalan’s under-rated Demon (a supernatural threat in an elevator), you can create projects that build a sense of claustrophobia from within by creating a threat from without.

It’s fun and grim in equal measure, but one of the year’s best guilty pleasures and horror outings. Given the scale of the country-wide apocalypse that informs the story, there’s certainly room for a sequel – apparently already being discussed given the film’s success and one suspects there’ll already be interest in a Hollywood remake. But for the moment, Train to Busan can stand tall on its own merits – proving that South Korean cinema is undergoing something of a renaissance and giving us just the ticket for a first-class journey into oblivion.

Train to Busan has been rolling out internationally over the last few months. It will arrive on UK screens, courtesy of StudioCanal UK on October 28th 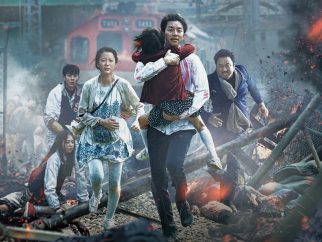