National Geographic's 'MARS' chronicles a future journey to the planet in 'documentary' and drama form...

The National Geographic Channel‘s MARS is an interesting beast – a mixture of actual documentary, pseudo-documentary and straight drama, deliberately blending them together to give audiences what the programmers hope feels like a fact-based show that could have been / will be  made forty years from now.  One might think that such a subject, however cosmic in scope, might be at the risk of being too ‘dry’ for a six-hour series, but the result is that it is actually the dramatic element that is the most risky element in the mix.

While films like The Martian were heavy on the factual and the technology of what an expedition to the Red Planet might entail and the resources an astronaut might have to draw upon, it dd so in one consistent, fictionalised account. We were watching a drama, a story unfolding in a familiar structure of acts. The fact that we learned about biology, aerodynamics and sling-shot techniques was the educational slice of an entertainment cake. The MARS series tends to want to have that space-cake and eat it. One minute it has real, named talking heads from 2016 (such as Elon Musk, CEO and Lead Designer of SpaceX and Neil DeGrasse Tyson) discussing the origins of the ambitions and the project, then transitions to the fictional ‘experts’ a couple of decades hence – a fairly seamless thing to do structurally. But then moving to the ‘acting’ scenes of a more conventional approach, the private moments aboard the Daedalus rocket as things go right and wrong, it tends to lift audiences not just away from Earth or Mars but away from the conceit and breaks that natural evolution and momentum. Each has their strengths and qualities but as a package, but it’s a balance that takes some getting used to.

Ben Cotton heads up the main cast, playing Mission Commander Ben Sawyer aboard the Daedalus craft. He’s the kind of stoic, experienced, chin-chiseled leader you want though based firmly enough in the orbit of reality to be believable and his crew are a mix of talented professionals whose ethnic-diversity is an organic plus rather than feeling manufactured.  Jihae, previously known as a singer/composer, actor and founder of indie music & multimedia company, Septem takes two roles, twins Joon and Hana Seung – Hana being the pilot while her sister is at Mission Control. Up-and-coming French actress Clementine Poidatz plays mission physician and biochemist Ameliene Durand,  Spanish hydrologist and geochemist Javier Delgado is played by Alberto Ammann, Sammi Rotibi is Nigerian mechanical engineer and roboticist Robert Foucault and Russian exobiologist and geologist Marta Kamen is played by Anamaria Marinca.

Ron Howard and Brian Grazer are producers on the project (their 1995 award-winner Apollo 13 showcasing the tone they’re looking to somewhat emulate here). There are genuine moments of palpable tension, particularly when the initial landing procedures do not go according to plan. The ability to flash backwards and forwards along the timeline to discuss the problem-solving process at different points in the mission works well in keeping up the ‘Can they solve this problem now?’ drama.  But those looking for a more ‘action’-orientated show will likely be disappointed with moments of crisis being the punctuation to a more sedate presentation. Like The Martian, Apollo 13 and Gravity the pressure and plot comes from the astronauts – and in some ways humanity itself – facing down challenges and either buckling from them or rising to find ways over, across or around.

Interestingly the score of the project comes from the musical minds of the legendary Nick Cave and Warren Ellis (not the comics guru). This is not their first collaboration – they’d previously helped score The Assassination of Jesse James by the Coward Robert Ford and this year’s Hell or High Water.

The pilot itself, available on the NatGeo website ahead of broadcast, is sufficiently well balanced to make viewers want to follow the mission further, as the astronauts look to make the best of their less-than-ideal situation.  Whether it can sustain that balance and oxygen of interest for its full run will be interesting to see. Too ‘doc’ and it may lose that sense of wonder (so far it’s a great advertisement for Mr Musk and his contemporary space-program) but too ‘drama’ and the cliches could render it a simple SyFy movie-of-the-week with more technobabble.

But so far, the Red Planet looks as inviting as ever. It may take decades to get there for humanity, but for armchair astronauts, tv will prove the quicker alternative…

MARS will formally begin its mission on November 14th on the National Geographic Channel but you can watch the pilot at:  http://channel.nationalgeographic.com/mars/ 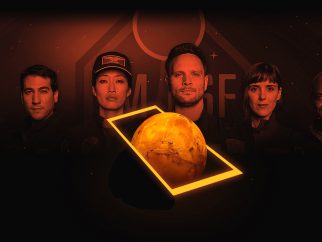