The long-awaited return of 'Lucifer' plays with some grand and sometimes darker themes...

After Lucifer’s confrontation with twin-sibling Michael, their battle is stopped by none other than their father. God himself has come to Earth to settle their ‘squabble’ but decides to stick around for a bit to see how his angels have been handling life on Earth. However, it quickly becomes apparent that God may have other ideas and motives and soon past family-conflicts are put into perspective when it seems that God may be looking to hand off many of his responsibilities.

But as various cosmic agendas are exposed and mighty questions of faith are tested, relationships – both professional and personal – are put under strain and sacrifices may have to be made.

As a battle for Heaven comes to Earth and sides are taken, will everyone survive the end of days..?

We now know that Lucifer will have one more season at Netflix before heading off into the televisual after-life, but originally this fifth run (divided into two and the second part finally here) was going to be the endgame and there are moments when that’s obvious. Befitting an ‘end of days’ writers’ room, there are episodes towards the back-end of this season that revist some of  Lucifer‘s greatest hits, giving each character their moment in the spotlight, to acknowledge past story-arcs, bring back some supporting players and – even by the show’s standards – having some wicked fun with some meaningful themes. (Life, death, sacrifice, faith, responsibility, Queen, guilt, Les Miserables, guilt, family, personal hell. There’s even room for a nice dig at FOX for originally cancelling the show!)

There’s some weight to the series that critics of the show – who probably haven’t watched it much – often dismiss. The complaint of making the ‘ultimate villain’ a good guy actually shows a lack of knowledge in that Biblical source material as the show puts the charming, swaggering agitator at its centre but makes sure that we know the distinction between an entity that has been blamed for creating humanity’s most base desires rather than the person who simply punishes them for such. As Mr. Morningstar himself has noted in the show, he was the one who kept those evil souls locked up in Hell – a real villain would have let them out.

Of course, the arrival of God creates some interesting dilemmas. Dennis Haysbert  (24, The Unit) plays the ultimate role with panache and it’s clear that, plot-elements aside, the deity is in safe hands with him. There’s a gleam in his kindly eye but also a restrained intolerance that walks the very fine line been Testaments. However I can’t be the only person who watches the deliciously dysfunctional family-dinner and hears the comment about it being the first-time they’ve all been together in millennia and feel like tentatively raising a hand and saying ‘Don’t crucify me for this, but aren’t you forgetting someone?’  Yes, the show has tackled The Devil, God, Kane, Eveand sundry demons but has stayed well away from any direct mention of Jesus. (Though one line in the series wryly makes a comment about a character called Jesus – pronounced Hay-Zeus in that case. Would that be a step too far for the Netflix legal department, even for a show that has likes to flex its theological muscles in irreverent directions?

Many shows have gone with an abstract ‘musical’ episode, some working far better than others. Bloody Celestial Karaoke Jam might not reach the gold standard of Buffy‘s Once More with Feeling – but it does well enough. It’s a medley of reworked familiars rather than an original soundtrack, but the sports-field scene that introduces us to the voices and fancy-footwork is ambitious and it’s clear that some major thought has gone into giving the characters and actors some huge fun. Triple-threat Tom Ellis frequently shows off his dancing, singing and piano-playing skills, but it’s the likes of Lesley-Ann Brandt, Aimee Garcia and Kevin Alejandro that more than step up to the plate and show-off some previous unknown talents.

In Daniel Espinoza: Naked and Afraid, Alejandro is great as Dan consistently tries to do the right thing in an ever devolving feud between old-associates and rival gangs and throughout the series getting physically pummeled and assaulted and worse… and in A Little Harmless Stalking, Rachael Harris’ Linda confesses to a crime she didn’t commit to protect someone special.

The last two episodes weren’t afraid to go dark and epic….. *further spoiler warning needed*….    The death of a major character is always difficult to pull off and more often done as a show reaches its series finale and not just it’s seasonal send-off. The death of Dan comes as a big surprise, or at least because of no obvious reversal (this coming after those aforementioned beat-ups and God’s momentary wrath which were largely played for laughs). This certainly wasn’t, with a bloody, mortally-wounded Dan dying in Chloe’s arms and with fairly gut-wrenching performances in its aftermath from the entire ensemble (and no better than Scarlett Estevez as Trixie who is just devastating). With the show-runners indicating that Alejandro will still have some sort of a role to play in the sixth season, it’s not all bad news.

The actual finale, the show’s most expensive episode to date, is also pretty good – with the stakes rising and the sense of real cosmic drama off-set by moments of humour to match the carnage. Ella’s ‘conversation’ with an absent God is ironic and clever (and we have to remember that she’s the only one of the main cast that doesn’t know Lucifer’s real role) and on the funny side there’s a stalling tactic from Chloe, Lucifer and Amenadiel that invoke’s M C Hammer and a call-back to the musical episode. Even knowing we have another season to come, there’s no assurances how the show is going to leave things, but Lucifer’s flight to Heaven and self-sacrifice finally earns him the diety-hood he wasn’t sure he wanted…’Oh My Me!’ indeed. The aftermath that will play out next season would have been truncated into a final act in this run if a renewal hadn’t happened, but either way Is This Really How It’s Going to End?! plays its cards well, even though the answer to the title is ‘No‘.

Frequently as whip-smart and thought-provoking as it is outright silly and outrageously fun, Lucifer is a show that’s rightly avoided eternal damnation a number of times. It may not be perfect, but for a thinking man’s guilty pleasure, it’s still quite heavenly… 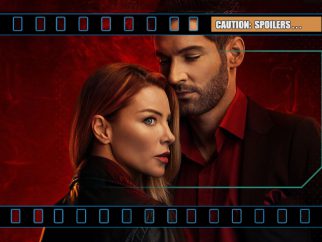