There's some observations about family dynamics and the danger of the Mother Tongue in the latest 'Clarice'...

The team are slowly closing in on Joe Hudlin, realising, with Julia’s help, that the monies involved in the pharmaceutical scandal could be far higher than imagined – though that may mean Julia taking more risks on their behalf.  However, Clarice is drawn away from those meetings when she’s informed that Catherine Martin has vanished. Clarice believes that Catherine may have tracked down Lila Gumb, the mother of ‘Buffalo Bill’, the man who kidnapped her and ultimately traumatised both her and Clarice in differing ways.

But by the time Clarice can work out Catherine’s destination, Catherine has already confronted Lila and now it’s a race against time to prevent a further tragedy. But with blood on the doorstep,  is it already too late?

Though there are nods to the River Murder Investigation scattered along the way, this episode feels very much like a coda, if not a sequel to the events of The Silence of the Lambs, essentially addressing the fallout to both Clarice Starling and Catherine Martin as they each try to come to terms, in very different – but connected – ways to the legacy of their time as captives of Buffalo Bill.

Again, the words ‘Hannibal’ and ‘Lecter’ are banned from the lexicon and there’s some intricate tap-dancing of talk all about the elements of the Jame Gumb/Buffalo Bill case, but never quite any specific mentioning the other ‘iconic’ serial killer’s name. It should matter more – it will always be a long-shadow factor for the show – but because the story flips backwards and forwards between Clarice and Catherine and Lila Gumb’s stand-off /  Ruth Martin and Krendler’s discussion while they wait for news, each discussing the fractured relationships between parent and off-spring (and vice versa), the episode keeps us mainly ‘in the moment’ and dealing with the consequences of the novel’s events rather than reliving the trauma directly.  Marnee Carpenter as Catherine continues to do some excellent work here, particularly in an episode that requires her to run a range of strong emotions and it’s easy to see why she’s sometimes compared in looks and performance to a young Meryl Streep. Maria Ricossa as Lila Gumb (Bill’s mother) also does well as a conflicted mother who is genuinely disturbed by her late son’s crimes and feels responsible for his formative years – where her inadequacies (rather than any intended abuse or intent) may have played a part, though his actions were his own. Michael Cudlitz and Jayne Atkinson’s discussion might be less fraught in the weapons department, but they have strong words to say to each other about the way Clarice has been used and treated as a pawn when she’s demonstrably not always been up to the jobs demanded of her.

It’s important that Clarice, against orders, makes sure that Catherine has to deal with the consequences of her actions. Things may work out after the stand-off, with no serious casualties, but Clarice knows that Catherine’s ultimate recovery must involve taking responsibility for the night’s events and hands her in to the local police. Given the circumstances and motivations (not to mention the Martin family influence) it’s unlikely that Catherine will face too dark a punishment, but it’s good that the show doesn’t blow off the need for follow-up and proper care.

Though the pivot into dealing with Catherine’s situation means there’s something of a screeching of brakes applied to the River Murder storyline, the couple of scenes that are related, work well. There is a nice moment back on the team’s investigation when it appears that Nick Sandow’s old-school detective Murray Clarke is going to have a hard time being comfortable around transexual Julia Lawson (Jen Richards). When she challenges him for simply staring at her, he explains that Julia actually has the same colour hair as his own missing/abducted niece (whom we know he’s been searching for, for years) and as it’s an unusual shade, wonders if there’s a specific brand that could act as another unlikely lead. Ultimately Julia explains her hair is natural, but it breaks the ice just a little and establishes that presumptions and misconceptions can flow in both directions. It’s also good that realising Julia has a company of friends at her house, both Clarke and Esquivel decide on discretion and talk to Julia by phone so as not to complicate the issue.  It remains doubtful that 1990s-era law-enforcement would have been as understanding on the issue, but at least the show is trying to show our good guys trying to be better.

What doesn’t work?  A few lines from Catherine (where she introduces Clarice to Lila as ‘the bitch who killed your son…‘) seems completely off-character, even given the emotion in the room. Kal Penn’s Tripathi is still conveniently off-screen  and is missed by the viewer if not by the characters. Equally, it’s becoming a little tiresome that Clarice continues to make the same mistakes about doing things alone that consistently threaten to get herself or others killed in the process. She’s called out at least twice this episode, but given the amount of times she’s been chastised (even formally warned) about her methods, none of it seems to stick. Epiphanies might time, but with many episodes making their climax around the dangers she faces alone, one wonders if there will be more significant consequences for such before season’s end (and with only a few episodes left). There’s also some conveniently-placed-at-the-end memories that Clarice recovers that suggests that her beloved father might not have been quite as innocent and reliable as she remembers (could this be a strand for the potential Paramount+ season as it seems unlikely it can be given adequate screen-time with what remains?)

Still a strong series with excellent performances, but still a show that feels like it needs a better narrative anchor to hold everything in place. It will be interesting to see what the remaining episodes do to address that… 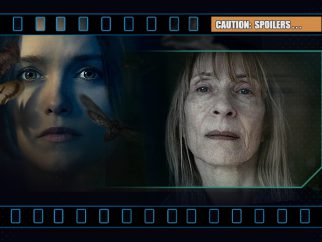 When Donnie met Johnnie: Something Wick’d this way comes…