There's a lot to accomplish in the anticipated but over-stuffed finale - and some of it gets done well...

Agatha is convinced that Wanda is now channeling the multiversal power of the Scarlet Witch and that’s power she wants for herself at any cost and so begins a battle for the chaos magic. The White Vision arrives to kill Wanda’s own version of the synthezoid and Hayward sees his opportunity to finish the job he’s started.  With Monica, Darcy and Jimmy running their own brands of interference, it’s a battle on many fronts with difficult choices, inevitable destinies and impossible sacrifices.

And what of the town of Westfield, whose inhabitants can only look on as their town is torn asunder around them… in the end, who will be left standing and what will be left of their futures?

“You are a body of wires and blood and bone, you are my sadness, and my hope, and mostly, you’re my love.”

Hello. Welcome back. Yes, you can turn on the internet again safely… and, presuming you’ve seen the WandaVision send-off, you are ready for discussion on the episode that’s literally entitled Series Finale… and it’s clear that WandaVision was ambitious on many levels not least because it was more a study in grief  disguised as a superhero romp, though the finale does lean in traditional direction in an attempt to tie-up all its tapestry’s many loose threads.

In the end, perhaps inevitably, the finale couldn’t quite live up to the anticipation that the groundbreaking ambition and success of recent weeks had generated – with pacing being the more obvious stumbling block. In hindsight the same series-long story could have probably been told over six medium-sized episodes rather than nine shorter entries and the finale had too many characters and references from its run to pull together evenly. The result wasn’t a disappointment of Game of Thrones proportions – far from it – but certainly there will have been many viewers with some niggles to go alongside their praise.  There were brilliantly acted scenes and highly impressive visuals for a television platform, yet several major players had little more than token scenes that felt like ticking-off necessary appearances rather than organically serving their service to the greater whole:  Monica has some minor Photonic fisticuffs then stands around a lot, there’s a reveal for Evan Peters that’s less startling than you might hope and expect (he’s basically not Mephisto, he’s simply an in-joke);  Jimmy has some snark and short aftermath scenes; Darcy’s only appearance is when she T-bones Director Hayward’s car and then vanishes off-screen and even Hayward himself, being built-up as the non-magic bad-guy more and more each week, really gets taken down far too easily for someone so nefarious. As excellent supporting players, they all deserved a bit better and could probably have received it with a few more minutes of running-time or some subtle pivots.

Kathryn Hahn gets to vamp it up nicely as Agatha/Agnes plays out her endgame and she manages to be both menacing and hilarious, the joins between the acting and the VFX almost seamless as she sweeps through the skies over Westview. There’s a denouement and resolution to her arc, but the slight possibility we could see her again depending on the needs of the wider MCU.

But this is Wanda and Vision’s story… and actually, even though there’s double Vision trouble at its climax, it’s essentially just Wanda’s story. By the end Maximoff is both hero and villain of the piece, sympathetic but accountable – the finale not letting her off completely for her actions and given what she did – even subconsciously – and the unholy trauma she’s shared with (and wrought upon) the wholly innocent townsfolk, it’s right there’s a price to pay and forgiveness won’t come easy. It’s another Dark Phoenix-like arc (the best of its kind so far) and it’s likely audiences may still be divided on whether Wanda suffered too much or not enough for what she’s done to others. For all Hayward was an idiot and zealot, a look around the town Wanda decimated in battle, the emotional as well as physical wreckage and the stolen ‘clay’ with which she sculpted it, really does make one question her heroic status and acknowledge her dangerous power-base – or at least probably should. Judgement, however, is somewhat deferred.

The ending is, inevitably bitter-sweet. Wanda and Vision’s ‘children’ will be lost when the Hex collapses but there’s a touching farewell. Elizabeth Olsen and Paul Bettany play their own final scene together with all the grace and style you’d want – and though it’s sad it doesn’t feel as purely tragic as past goodbyes because, knowing what’s coming (albeit quickly) they have just enough time to do so on their own terms rather than in the midst of battle… and so, after a season of grief personified  it’s more about a moment of unquestioning love than unmentionable loss. (It’s interesting that the Vision we’ve been following doesn’t survive, as it initially appeared that a blending of the monochrome robotic and the memorial versions could have given the perfect ‘out’ for being able to survive outside the hex – though we do have the ‘White Vision’ version somewhere out there which should prove interesting for MCU fans going forward – and a delightful pain in the side of racists using Google searches).

Easter-eggs, as ever, are plentiful and looking at placards, shop-fronts and cinema billboards is a full-time job for purists…and there’s references outside the obvious Marvel source material – early moments doffing the cowl to The Wizard of Oz, Terminator and possibly even Doctor Who classic ‘Forest of the Dead‘. Two requisite epilogues essentially prove interesting teasers for forthcoming projects. The first (mid-credits) scene has what seems to be a Skrully set-up for Captain Marvel 2 or the proposed Secret Invasion series and the latter shows Wanda off in a mountain retreat (Wundagore, anyone?) living a quiet life but whose astral form is in deep study of the Darkhold and a way to bring back her kids- which must surely tie-in explicitly to the Doctor Strange sequel.

Proving imperfect in the end but still perfectly unique, WandaVision is a glorious love-letter to television, a heartfelt testament to grief,  a proud shout-out to nostalgia and a touching tribute to quirk and can rightly be seen as a first-division success… 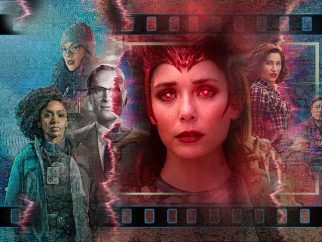