They may be deskbound, but VICAP's team are determined not to be silent, sacrificial lambs...

With Wellig’s death while in custody hanging over them, VICAP finds itself under close scrutiny and unfortunately the man drafted in to oversee the investigation has a clear agenda from the start. One way or another he’s either going to take Paul Krendler or his entire team down – perhaps nabbing Clarice Starling for his own department.

However, even as pressure grows, the team refuse to be played-off against each other and double-down on finding answers. But how far is everyone willing to go to protect the team and what lines might be crossed in the process?

This is an episode of Clarice with no actually killing, serial or otherwise – unless you count death by a thousand bureaucratic paper-cuts as cruel and unusual. On paper that mostly-deskbound remit could make it sound potentially boring and yet You Can’t Rule Me turns out to be another example of what a creative and tonally-confident show can do without expansive location-work and when confined for a good 2/3 of its running-time to one office-setting.

Office politique and racial profiling within its own ranks are both addressed as a consequence of recent events and bureaucratic tactics. Stargate: Atlantis‘ David Hewlett makes an excellently snide and instantly dislikeable investigator Anthony Herman (described best by Krendler as an ‘Alpha Dog of Violent Crime, who never left the building‘) but understandably brought in to find out how a suspect was murdered on the premises under the very eyes of the team. Unfortunately he sees Krendler, with whom he has a mixed history, as a perfect sacrificial lamb that he can use to dismantle the team and cherry-pick its best agents. But it’s interesting that in Herman’s efforts to divide the team up and play them against each other, it only solidifies VICAP’s workers to pull together, even against Krendler’s own wishes to protect the team by taking the fall himself if required.

It’s also interesting that Starling, earnest and talented though she is, is taken down several righteous pegs by those whose respect she desires. Krendler points out that going on gut instincts will only take you so far and it was luck more than skill that led her to surviving Buffalo Bill. More so it was and is unprofessional to put other agents at risk by not working as a team. Krendler himself, it ahs to be said, appears willing to cross a significant amount of lines on his own to ensure that the team aren’t disbanded. Clarice’s room-mate and fellow agent, Ardelia Mapp (Devyn A. Tyler) is brought in by Herman to throw Starling off her game and ends up having to point out the hard truths to Clarice about how Starling herself is also using her – to circumvent Herman – placing her in an impossible position. Ardelia also notes how easy promotions have come for Starling while Mapp’s own considerable efforts are routinely taken for granted, possibly due to her colour. It’s a hard truth but Clarice acknowledges that she’s spent so long trying to be the best she can that she’s failed to see when others’ best isn’t rewarded in the same way.

A sign that the production and ensemble are hitting their stride is the smart snark and banter that punctuates proceedings – and which, in the midst of the wringing of hands and furrowing of brows, will raise a smile..  “I’m a mutt – I’m Cuban, Brazilian and Italian“, notes Lucca De Oliveira‘s Tomas Esquivel. “Two shrugs and an eyebrow is an entire conversation…” Kal Penn’s Shaan Tripathi manages to consistently find new and interesting ways to insult the safety of Clarice’s vehicle and Nick Sandow’s Detective Murray Clarke takes particular delight in yanking the chains of the investigators who have put him on desk-duty.

By the end Clarice has acknowledged some of her own failings but unfortunately may not have actually taken them to heart – her return visit to a hospital leading to an attack she appears to lose (and really, any mention of ‘twins’ in a murder investigation should raise all sorts of alarm-bells for detectives and viewers alike!).

Chloe Domont, another versatile Trek director brought across by CBS (and seamlessly following the likes of Maja Vrvilo and Doug Aarniokoski) makes the very most of the limited locations and achieves a balance of tone, humour and drama. For all its procedural formula and the almost-untouchable back-story that initiated it, Clarice is quickly becoming an impressive and mature addition to the schedules in both production values and result… 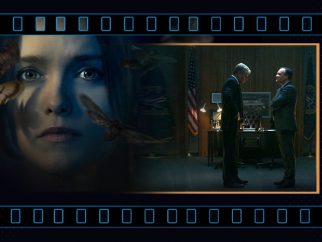