‘Big Sky’ Thinking: Is ABC’s new drama a treasured state of affairs or not?

ABC's latest would-be cult thriller is fine, but it can't see the woods for the tropes...

Montana-based investigator Cody Hoyt starts the day with no idea how bad it’s going to turn out. Firstly, his estranged wife has just learned that her best-friend Cassie is sleeping with Cody. Then he hears that two young women, sisters Danielle and Grace Sullivan who are en route to visit Danielle’s boyfriend (Jenny’s son) have failed to turn up and he’s asked to help search. That investigation takes a dangerous turn when a local cop notes that though it hasn’t made the news, there’s been quite a lot of disappearances of young sex workers in the area, indicating a predator might be working the local truck-stops.

Ronald Pergman is the trucker who is trying to put as many miles as he can between his work and his disapproving mother but tasering prostitutes probably doesn’t help. When he’s angered by the driving of Grace and Danielle, the encounter leads to the reason they’ve veered off their expected route.

Is the disappearance a symptom of something even more sinister and can Cody find out what has happened to the girls before their fate is sealed?

Murder mysteries set in those special kind of small towns filled to the highway with ‘disparate characters with secrets’ ™ are nothing new, the foliage and backstreets of primetime highlight a string of successes and failures.

So it’s hard to know what to think of new ABC drama Big Sky, based on CJ Box’s novel The Highway. After an effective and moody marketing campaign that certainly raised interest in the new primetime drama (show-run by tv stalwart David E. Kelley) and which suggested it could be an interesting wild card in the schedules, the result is actually something that’s perfectly fine in some ways, that has moments of interest and intrigue and a few surprises along the way but most of the time feels like a series culling ideas and plot points from any number of dramas that have preceded it with only a few twists in the mix. Not dreadful, then, merely nothing particularly new.

Though there are lots of questions raised in the opener, a fair amount is predictable or at least familiar enough. There’s the passive-aggressive trucker (essayed by the versatile Brian Geraghty of The Alienist, Chicago Fire and Chicago PD fame) with ‘mommy issues’ and a kink for kidnapping sex-workers; two girls who make all the obvious mistakes when travelling the backroads and two other grown-women coming to blows over a man who has bed them both. In fact, there’s really one big surprise in the mix, coming in the closing minutes of the pilot episode, one that might have caught you off-guard if you’d avoided spoilers before viewing or hadn’t read the novels on which the series is based.

It’s really impossible to review the opening two episodes without talking about them in full, so here’s further notice that there’s spoilers following from this point onwards…. Ryan Phillipe, the biggest star in the cast and whom the show seems to pivot around in the opener, is suddenly killed off at the end of the pilot… by the seemingly laconic backwater cop who was supposed to be helping him – thus setting the scene not for just an investigation into those missing girls but the two women in his life forced to work together to find the truth. If early reviews didn’t spoil it, it’s certainly a game-changer for any viewer that managed to hang on to the end of the episode, an alert that things might be about to get interesting.

Those who did hang on and catch the second chapter, broadcast on ABC this week, would have seen an improvement and  were somewhat rewarded by a better script and some development in all the characters, though the story itself only inched forward. There’s a feeling that it took those two episodes to settle in and set out its stall which ultimately  appears to be an episode of Criminal Minds written large with a just a smidgen of Twin Peaks. There’s some nice zingers in the mix, but also some dialogue that probably read better on the page – so that unevenness continues to be a problem even if everything looks pretty.

There’s little arguing that its currently the cast shouldering the weight. Katheryn Winnick (Bones, Vikings) as wife Jenny and Kylie Bunbury (Under the Dome, Brave New World) as investigating partner and girlfriend Cassie are the women who both love Cody and they’re fine as far as the requisite strong and sassy types who were best friends before they became frenemies. The script lays their falling-out at Cody’s feet (or other parts), but it’s the kind of set-up in which we’re not made to genuinely hate any of the parties involved, so that when that unexpected death happens, the pieces can fall back together with only token temper-tantrums as fault-lines.

The two missing girls Danielle (Natalie Alyn Lind) and Grace (Jade Pettyjohn) make every single mistake required of them, feeling like they are auditioning for a slasher flick set-up with a ‘sensible’ one (Pettyjohn)  and a ‘flirty’ one (Lind), both a love-letter to stereotype. Pettyjohn fares better with the material, but Lind merely has to simper and whine was far better in The Gifted, at least grading on a curve). The most realistic element (sadly) is that it takes two ‘clean-cut’ girls being abducted to raise the interest of law-enforcement who have previously shrugged over prostitutes going missing. (In real life the show has already caused two indigenous organisations to comment on the lack of inclusion and also the lack of real-life interest in the amount of  indigenous women going missing every year). Non-binary actor Jesse James Keitel is potentially the most interesting of the captives, Jerrie, though the script shows some moments of solid sensitivity amid the predictable fare. – but avoids the crime cliche of having a gay character or sex worker be the first victim – at least, so far).

Best of the ensemble is screen veteran John Carroll Lynch as Rick Legarski, the duplicitous cop who we realise is the main ‘big bad’ beyond his backwater badge. Knowing that the persona he displays to visitors is a facade, allows the actor to chew the scenery in a way that a more straight-forward performance would not and there are moments in the second episode – now knowing what Legarski is capable of – that generate genuine tension when challenged by Cassie as she investigates and whose radar detects his flaws.

Big Sky shows some slow-burn promise but is initially neither original enough to be truly quirky nor quirky enough to be truly original. It’s also served poorly with a score that feels more like a cut-price jukebox than a carefully reflective soundtrack – and quickly distracts rather than emboldens. It may never be the groundbreaking show the marketing suggested but could prove to be a guilty pleasure if it can quicken the pace and  start to subvert the tropes and cliches rather than embrace them… 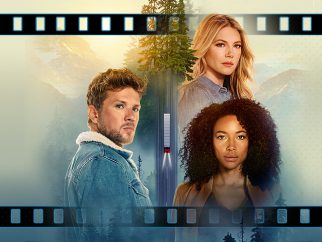