Twin-Tracked... Both sides weigh victory, but as the clocks ticks a more literal divide is considered...

The revolution aboard Snowpiercer is underway and both the front of the train and the ‘lower classes’ know that everything is in play. There’s been major blood-shed and loss and Layton (Daveed Diggs) wonders if their momentum can and should be maintained with such losses. It’s a concern that Pike (Steven Ogg) plays into at the behest of the higher-ups, especially if they continue to feed him well. Initially Layton is not deterred, but news he will be a father makes him think further about the consequences. Could a surrender prevent almost certain carnage?

However Melanie (Jennifer Connelly) has narrowly avoided immediate execution and manages to get further back down the train. She knows she has few friends there either, but suggests a way that she can help them win the day – a desperate plan that will rely on her unique knowledge of the train’s operating systems and split-second timing. But the likes of Commander Grey (Timothy V. Murphy), the Folgers ( Vincent Gale and Kerry O’Malley) and the ‘betrayed’ Ruth (Alison Wright) are determined to put a stop to the rebellion and secure their own positions… some of them willing to kill as many as needed to ensure that.

There’s slightly less carnage than the epic battles of the preceding chapter but there’s a lot of confrontations in the penultimate episode of the current run. The title is a fitting The Train Demanded Blood, and despite an action-filled hour, that’s best personified by two quieter scenes executed on an emotional level. Firstly Walter (Gary Hetherington), the paper-maker who served on the tribunal and secretly helped the Tailies is executed (via the ‘ice-lung’ method, which is just as harrowing as it sounds) and which perhaps serves as a metaphor for all revolutions and oppressor conflicts.  Then when Layton, already failing against a ticking clock fights to save a group of Tailies who he knows will die if he carries out the separation plan – dooming them to an icy death if he can’t free them first. He does his best, but realising they aren’t just being held in the carriage but are chained down without any knowledge of the keys to unlock them, he is forced to abandon them, knowing that to delay the separation will doom far more more. It’s a toll that Diggs conveys with aplomb. 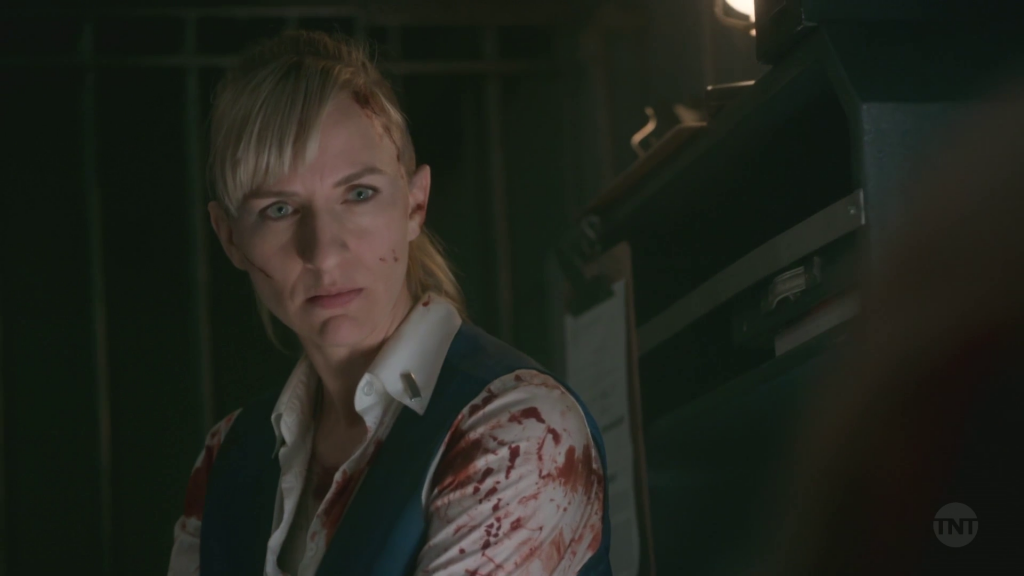 The main cast dominate with Connelly and Diggs in fine frenemy form and with many of their trials and tribulations coming back to haunt them… they’ve proven the cornerstones of the show – but there’s also able support in the form Mickey Sumner as Beth Till, the character who probably makes the longest journey through the season. And the solemn intensity is wonderfully punctured by Mike O’Malley (brother of co-star Kerry) whose Roche  and his wry observations about luncheon meat and the chances of success land well.

It all feels like a season finale, despite another hour to come and though some of the plot points feel a little inconsistent, there’s a strong over-arching feeling that the show is now unapologetically an earthy show about class-warfare (with touches of the high-concept) rather than the all-out surreal version of such in the film. Indeed, if the season had finished on the final shot of the ninth episode there would have been few complaints.

The second hour of the night, 994 Cars Long, felt more like the epilogue, aftermath and opening salvo of the second season. Some of the antagonists have been left behind in a switch-track maneuver that’s probably better to watch than to explain and which there are hundreds of questions about just how technically viable such a feat would be. (Is it truly the last we’ve seen of the wonderfully condescending and conceited, privileged Folgers etc? The circumstances would suggest they’re gone for good, but who knows?)

As with all revolutions, good intentions lead to hard practicalities and celebrations lead to anarchy in the short-term as some of the Tailies (especially Steven Ogg’s Pike) seize more than an equal opportunity and move on to actual looting. Layton does his best to make sure that this is a brand-new start for al aboard Snowpiercer, that there will be no further retaliations and that a new order is restored with no-one’s contribution taken for granted… but as Melanie already pointed out, such responsibilities of governing can weigh heavy.  It’s interesting how the shift in character dynamics work. Some, including LJ thrive on anarchy, but less so when they are themselves cut adrift and if it was tempting to think she’d set her own parents up to be lost in the previous episode, she seems genuinely distraught on their absence when she can no longer control her own world. She is, however, the kind of person who survives at all costs so it would be wise not to completely discount her currently-reduced influence. 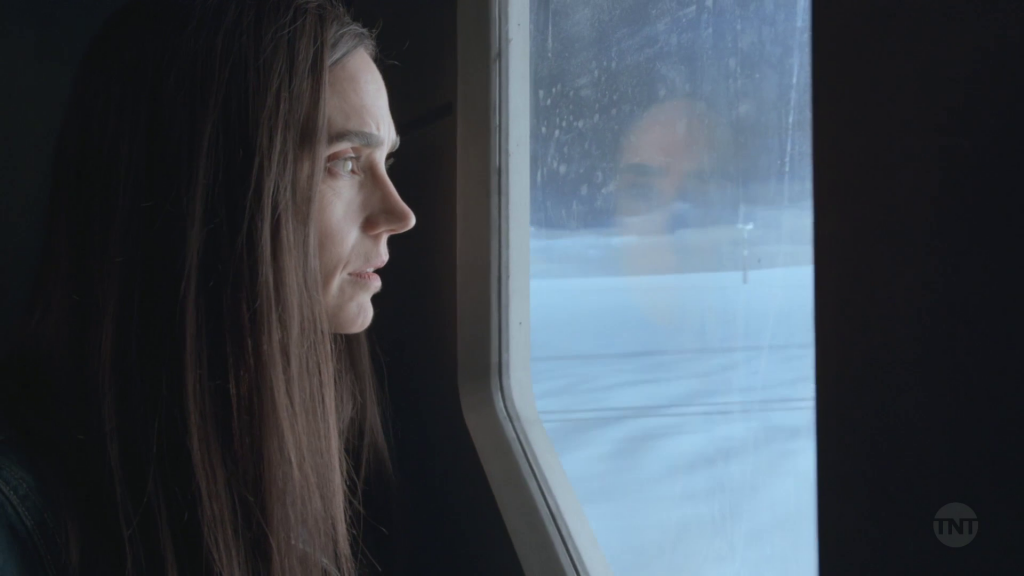 It becomes clear that engineer Bennett Knox (Iddo Goldberg) is hiding something after he shuts down the satellite relay when a strange signal is detected and Melanie, ever the strategic engineer, works out that it’s coming from beyond the train. Snowpiercer should be speeding up to make its way through and out of Chicago – ironically where the journey originally began for the train – but if they do so they’ll not be able to pinpoint the position of what may be a remote enclave of survivors.  But the signal isn’t stationery and turns out to be ‘Big Alice’, the support train for Snowpiercer… and it’s closing in. Ruth is convinced its Wilford, back to take what is rightly his and Melanie and Layton fear she might be right. Either way, it’s now a danger. They attempt to speed away but with the new train threatening to hijack their system, Melanie takes some drastic action. It’s not enough… as ‘Alice’ forces them to a sudden stop and then begins the process of cutting through into Snowpiercer’s tail…

For all that Layton is saying there will be a reckoning between himself and Melanie, she still seems to have a huge amount of freedom and influence, spending much of her time in the front engine until the second train appears. Though Connelly is consistently good (her different ‘looks’, casual and formal, alternating between a woman who seems young and idealistic and then an older, more weathered-by-life experiences are quite extraordinarily effective on a visual level) the show still can’t quite decide how it wants us to view her. One week she’s been totally distant and ruthless, the next empathetic and her killing of Josie will have won her no supporters – on-screen or off. We’re essentially asked to finish season believing that Melanie IS ruthless and flawed but driven by solid, if sometimes convenient morality and responsibility. Yes, the finale plays to the more tragic side of Cavill, a woman who has made heartfelt, but heart-breaking decisions and who knows she’s likely saved humanity but lost something in the process. Her sojourn to Audrey’s ‘insight room’ shows the true depth of her sorrow. But while the finale episodes may gain her some sympathy they do not extort a full amount of forgiveness.

Quibbles? The arrival of the never-mentioned-before ‘Big Alice’ is feels a bit narratively awkward and convenient (though echoes some of the original graphic novel) but also something of a departure for a series that has given us a train held together by pipes and hope. As it ‘locks on’ to Snowpiercer, the CGI is quite overt and for a moment it seems we’ve gone into Transformers territory with Alice’s engine almost ‘biting’ into the rear of the train.  Story-wise, if Big Alice is a supply train and a ‘back-up’ it shouldn’t really be the superior model and though seven years have passed since both trains seemingly departed, we have been led to believe that Melanie was the real engineer and designer behind it, so it may be interesting to see where these other elements came from. Melanie’s balancing-job on the roof of the train is effective but might have been more so if we hadn’t seen her doing the same thing under the train a few episodes before and Ruth bringing down a children’s choir to greet the ‘benevolent overlords’ in the tail seems bizarre but feels almost abstract enough to have appeared in the film.  The fact that the first face we see from the ‘boarding party’ is Alex, stirs the pot nicely for future dynamics, but is somewhat questionable logically: would the young woman really be the best choice to enter ‘enemy’ territory run by her mother… well, perhaps so.

All in all, an interesting ending to a show that initially struggled to find its footing but certainly has something timely to say about the way we treat and rely on others. With a guaranteed second run, there’s certainly room to explore more of the dynamics and perhaps remain as relevant as ever. As for that second season…

*No, seriously, major spoiler for Season 2*

The official trailer for the second season of Snowpiercer – which had almost finished filming when the COVID shutdown was enacted – reveals that Wilford is indeed on Big Alice and, yes, the actor playing him is one Sean Bean (whose voice we heard earlier in the season)  In what must be a degree of cosmic irony, this means the actor famous for playing characters that don’t survive for too long despite top-billing is now performing a volte-face and is actually being brought back for the dead in his first real appearance on the show. 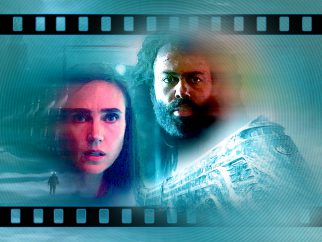 COVID-19: Winter (Soldier) is Coming… but not quite yet…