Nancy Drew (Kennedy McCann) had it all – she was intelligent enough to show-up the local police’s efforts in finding a missing classmate and eventually became the town of Horseshoe Bay’s own prom-queen.  But the death of her mother changed her life and instead of sailing off to a prestigious college, she stayed in town and now works at the local diner. She keeps telling herself her life has been delayed rather than derailed and she’s happy, even if her relationship with boyfriend Nick is getting problematically serious and her link to her attorney father Carson (Scott Wolf) is also strained.

She’s foresworn off ‘detecting’ but when a socialite is murdered in the diner’s car-park she finds herself and some of her fellow friends and co-workers under suspicion. Old habits die-hard and Nancy wants to find out the truth – however reckless she has to be. But as she pushes the boundaries of the law to investigate the case, she also begins to discover questions she might be advised to leave well enough alone. What secrets lie in her own family history and those of her fellow Horsehoe Bay townsfolk… and could the victim of a two-decade old murder be literally haunting Nancy’s every step?

Throughout the various runs of Veronica Mars, Kristen Bell’s erstwhile young detective was often compared to literary classic sleuth  Nancy Drew, so it seems only fair that The CW‘s new series that bares that name, positively drips with a wannabee-Mars vibe. Sadly, what it ends up offering is a watered-down version with little to make its own way in primetime. Nancy Drew bears little resemblance to the heroine of the original books (which, admittedly first began in the 1930s but have been revived and rebooted in literary form many times). Each incarnation has somewhat reflected the culture of the time, making Nancy a gutsy role-model as needed and cited by influential women as an inspiration – but if that’s true (rather than the title simply being taken in vain here in an opportunistic marketing gambit) then the current generation may have a real problem with what it says about them.  Nor does it have the saving grace of a snarky, savvy repartee akin to Neptune’s Veronica… just  more of the far simpler and far less interesting ‘young and beautiful people with old and ugly problems‘ motif that has become the hallmark of any generic CW primetime experience outside their Arrowverse. While Veronica Mars gleefully and subversively poured scorn on the format, Nancy Drew embraces it all like a cheap prom-dress…

It’s hard to tell who the series is aimed at: those who liked the books will see only the most vague ghosts of old; it’s YA format indicates a demographic that’s primed for the traditional teenage/young adult experience and yet there are other touches which suggest it’s trying –  unsuccessfully – to be simultaneously edgy wile dictionary-definition PG-13. Yes, it may start with Nancy and boyfriend Nick having some almost-illicit sex in the back of a garage workshop, but that description alone is ten-times more titillating in its description than the actual result on screen and its glaring lack of chemistry. Then we’re quickly into a first-person narration by Nancy that might rate as leaden exposition if it could just drum up more enthusiasm. It’s not a great start and it doesn’t get much better from there. Any irony there may be on show is so heavily broadcast as such it loses the right to claim it.

Kennedy McCann is decent enough as Nancy, but is given little more to work with than a cookie-cutter ingenue with no real distinguishing characteristics (just ill-advised recklessness needed to drive the plot and family-problems that demand a generic warbling soundtrack that would be too saccharine for a Nicholas Sparks movie).  McCann looks like any number of other actresses of her age playing characters several years younger and there’s nothing in the script with which to distinguish herself. Party of Five‘s Scott Wolf is her widowed father and lawyer who has several secrets of his own, Tunji Kasim is Ned ‘Nick’ Nickerson, an apparently nice guy with a dodgy past and her fellow servers at the local diner include Leah Lewis, Maddison Jaizani and Alex Saxon (who have all the familiar quirks of a B-list Scooby Gang in the making). Just for fun,  those with good memories or who are old enough to know better, will recognise Pamela Sue Martin, who played Nancy Drew in the 1970s series (that memorably swapped weeks with fellow young ‘tecs The Hardy Boys), making an appearance as a dodgy psychic.

That spiritual aspect, including the rumoured ghost of a possibly-murdered prom-queen way back in the early Noughties (and if that doesn’t make you feel old, nothing will), has been a selling point for the show ahead of its debut but it sits uneasily with the rest of the set-up. Is this a detective show or a ghost story – the opener really can’t decide and doesn’t put sufficient energy into either. This isn’t Buffy or even the more recent Sabrina, though it feels as if Nancy Drew is pilfering some of that fairy-dust to bolster its own lack of individual sparkle. (However fans of Riverdale may find safe harbour here in attempted tone and execution, though not as satisfyingly delivered…).

The new tv season may boast an exciting array and fighting force of female empowerment , but sadly Nancy Drew – a character that blazed the trail for them – is here presented in an incarnation that is bland in the extreme and derivative to the max. It’s not a show but a list of clichés that might have worked better as unashamed parody rather than earnest drama.. The only mystery is how it beat out other shows for its spot… 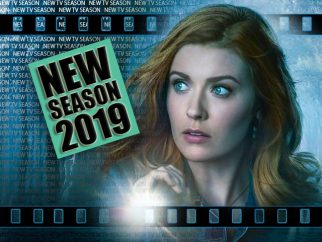