Jesse Pinkman (Aaron Paul) is on the run. After escaping the brutal clutches of the White Supremacists who were holding and torturing him into making their Meth, his uneasy and fateful comradeship with ‘mentor’ Walter White (Bryan Cranston) gave him and out and as the police closed in on their location, White accepted his fate and Jesse took his chance to flee. Jesse doesn’t want to share Walter’s fate but his options are limited and he’s going to have to call in some serious favours to put distance between himself and recent events.

Jesse knows that there are not many people who will be willing to help him. There’s only a few people who will assist of previous loyalties and some who might do it for financial gain.  With no real money to his name, he recalls an event during his imprisonment that suggests where a serious amount of cash could be hidden. He’s going to need it. But finding it, keeping it and using it are three very different and difficult obstacles to overcome.

Jesse has learned a lot and lost more… but there are some things you can never get back.

Finales are infamously tricky things to deliver well, needing to leave people wanting more but with a feeling they haven’t been short-changed in resolution. Breaking Bad proper had a perfectly good farewell, one that didn’t answer everything but gave some characters a fateful bow and set Jesse Pinkman racing towards an horizon that we could only see from a distance and only imagine what lay beyond. In re-visiting that ending – picking it up seconds later – and extending it backwards and forwards there’s always an inherent danger that you don’t recapture the magic, you simply undermine the original, the powerful punchline reduced to an adequate anecdote.

The bottom line is that while entertaining and fun, El Camino is less of the ‘event’ than some might have expected or hoped from the ‘movie’ declaration.  It’s simply an opportunity to give Jesse a more- defined goodbye after his trials and tribulations of the final season saw him reduced to a rather pitiful state of his former self. Here we see him after that event horizon and rising again, or at least treading water and with circumstances that could still see him lose it all. Though this is, of course, being made six years after the end of the main show, it feels like the kind of story chapter you might find in a series where, for pragmatic purposes, the focus shifts for one week to feature less of the main narrative and cast and allow the production to film chapters simultaneously to stay on schedule (think how Doctor Who regularly used the same production strategy). That being said, there are certainly worse fates than to be judged against the main Breaking Bad series and not found wonting. Essentially, if not quite the… essential viewing one might have hoped for, El Camino is still a tasty extra helping that thankfully doesn’t spoil the previous banquet.

Original creator Vince Gilligan makes sure that all the familiar tones of dark humour and smell of barely-contained desperation are here and in abundance. Despite the years passing, Aaron Paul and a number of familiar faces easily slip back into their New Mexico-based personas. Yes, there’s an additional few pounds and wrinkles here but with some allowances it’s not difficult to go with the idea that minimal time has passed. Once you recognise the film’s technique for flashing backwards to unseen key events set during the series (having Paul shave his head in the ‘present’ helps better differentiate the ‘then’ and ‘now’), it becomes like visiting a familiar friend… and fans of the show will be largely pleased with what’s on offer if not wholly satiated.

Though Paul is definitely the pivot, crux and centre of everything here, he’s ably supported by a cast equally happy to reprise their roles.  Jesse isn’t Hamlet, but Matt Jones as Badger and Charles Baker as Skinny Pete are the reliably inept Rosencrantz and Guildernstern of this universe and here produce some touching moments as well as eye-rolling scenes.  Robert Forster’s role, reprising his ‘Ed the Disappearer’ character, is essentially an extended cameo but is perfectly pitched as always and particularly poignant given the actor passed away on the day El Camino hit screens. Other faces reappear but it would be churlish to confirm or deny some of them ahead of viewing.

Gilligan, also on directing duties, cranks up the tension well, the familiar formula of ‘best-laid-plans’ going awry now a staple of the Breaking Bad mythology. For the most part this involves a mixture of skulking in shadows and filming in tight spaces but it’s also achieved by sharp dialogue and in a number of effective stand-offs  Jesse makes up for lack of skills and luck with a sharp, calculating mind. He may be the architect of some of his worst decisions, but he can calculate a desperate exit strategy with the best of them. There’s also violence here, sometimes graphic, but it is used sparingly, the threat of it more notable so that when it spills over it’s almost a relief rather than a shock. It’s messy and awkward, the antithesis of Hollywood glamour and all the better for it.

Fans of Breaking Bad will like El Camino a lot, rather than completely loving it. It’s the latest in a trend of ‘You thought it was all over, but…‘ powered spin-offs that often feel driven by potential energy more than actual need. No, it’s not  quite the compelling, necessary addition some wanted, but neither is it the over-opportunistic mess that it could have been.  Appropriately for Breaking Bad, it’s a well-formulated, if morally-dubious and addictive quality product, with a distribution deal and all resulting in a temporary guilty pleasure. So, as ever, there’s meth in the madness. 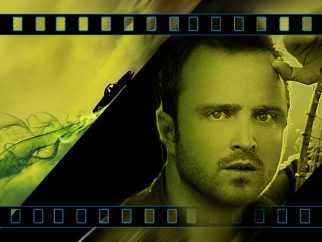