For a long time the very idea of an 'Aquaman' movie was a joke. But now it's an actual reality, so is it ship-shape?

Arthur Curry is an infant that shouldn’t exist. He’s the son of lighthouse keeper Tom Curry (Temuera Morrison) and Atlanna (Nicole Kidman), the fugitive queen-to-be of Atlantis. When Tom finds Atlanna severely injured on the coastline, he saves her and they fall in love, but despite the birth of Arthur, Atlanna’s past comes calling and she is forced to flee again, leaving Arthur with Tom but promising to return one day.

But Tom waits in vain and Arthur (Jason Momoa) grows up without his mother, though he receives some training from Atlantean mentor Vulko (Willem Dafoe). He finds he has the ability to talk with the creatures of the sea and his strength and stamina makes him a magnate for trouble. He even lends a hand with some superheroics when pushed, but would rather be left to his own devices.  So when Mera (Amber Heard) comes pleading him to come to Atlantis and claim the throne for himself, he really isn’t interested.

But his half-brother and current ruler of Atlantis, Orm (Patrick Wilson) is tired of the way that land-dwellers have treated the oceans as a dumping ground and is looking to take the war to the surface in spectacular fashion and so Arthur may not have a choice. As the attacks from the sea begin, Arthur heads to Atlantis for the first time to discover not just his heritage but his fate and that of the planet… but there are plenty of people who would like to see him fail…

For years, screen sirens and supermodels were asked to turn up in front of the cameras and simply look good.  What lines they said and the story that placed them there were ultimately deemed far less important than the iconography of sashaying across the sand, damp, earnest and sexy, looking good in swimwear and their hair blowing behind them in the wind.  Well, strike one for equality, as Aquaman plants a testosterone trident in the heart of equal-opportunistic sexism and has the male of the species largely asked to fulfill the same superficial (or should that be super-fish-all) role. Like a cross between a shampoo and a deodorant commercial – and with barely the same degree of depth – Warner/DC‘s latest cinematic hero may be cashing in at the box-office but flounders in the shallow end of credibility.

Even for a genre that asks for a bigger suspension of disbelief than many, the story makes no real sense and the performances can’t really hide that the ensemble is busy counting their wage-packet. It’s actually a tribute to the tenacity of the familiar faces (Kidman, Wilson, Dafoe etc) that they can deliver pantomime theatrics with all the pseudo-gravitas of greek tragedy. Wilson deserves an Oscar for shouting “I am Ocean Master!” and keeping a straight face. But the truth is that there isn’t a single character in the entire enterprise that particularly makes their mark or couldn’t be just as ably portrayed by another performer. Even Momoa (Stargate: Atlantis, Game of Thrones), the man-mountain around which this maelstrom energetically swirls (and who wisely seems to be a total good sport in not taking the business too seriously in real life), is largely wasted, merely asked to stride manfully between ocean and land and alternate between smirk and sneer. Perhaps the production felt him turning up and just being Jason Momoa would be enough for at least half the audience – but as my wife dryly noted about ‘WetThor’ ‘He hardly even take his shirt off!‘ which underscores at least one obvious problematic base-line.   Narrative-wise, we’re simultaneously asked to believe that the world is unaware of Atlantis and its a myth, despite some of the events already depicted in the DC cinematic universe which would at least add some credibility.  Also confusing: Atlantis keeps in regular contact with the young Arthur in the form of Dafoe’s Vulko helping him deal with his growing powers. But we’re never shown how they meet and though he eventually informs him of his mother’s fate neither he nor Arthur happen to mention it to dad Tom who heads down to the pier every day in the hope Atlanna will come back.  The inquisitive and demanding Arthur, in all his thirty or so years, has also never apparently gone looking for further answers or found Atlantis (essentially the planet of Pandora meets the resort of Vegas)  which appears to be in immediate swimming distance. (Add to this, at least one set-piece set on a boat which should at least raise the ‘Wait, they can swim at supersonic speed, why do they need a boat?‘). Far too much is cast overboard as the studio demands we get to another interchangeable aqua-battle.

Such testosterone tentpole releases now rely on special-effects and subsequent set-pieces but here they too prove unforgivably uneven. Oh, yes – shiny and glowing  and dripping with expense to be sure, but with the exception of a couple of striking moments, many far too distractingly obvious and unoriginal all the same.  For the initial set-up Nicole Kidman and Temuera Morrison (Once Were Warriors, Barb Wire) are ‘de-aged’ in a way that never quite escapes the ‘uncanny valley’ of limited realism and in some of the wide-angle set-pieces and fight sequences, the actors are regularly substituted with synthesbian stand-ins to the degree that makes one wonder if any of the cast even got wet during the entire shoot. Early ventures beneath those waves crank up the high resolution and the pixel count but often feel like Tron on an Avatar budget, executed in glowly flourishes but in illogical and inconsistent fashion that’s more a soggy 300 and crusty Clash of the Titans rather than the epic feel of The Lord of the Rings desired.  James Cameron’s The Abyss sold that almost extraterrestrial quality in better fashion twenty years ago. It’s all done with a wave of the hand with the ensemble performing like Saturday Morning Serial heroes and villains and global locations whizz by with a series of laughable descriptions that include a diverse number of variations of  ‘Somewhere in the xxxx Ocean…‘

With all the money spent on the special-effects, it appears there was only enough left in the budget to wrangle a second-tier soundtrack. While the original instrumental creations are fine, inferior snippets of Roy Orbison’s Mystery to Me and even Toto‘s Africa (reimagined as a rap-track by ‘Pitbull’)  are, frankly, cringe-worthy – so much so they produced groans and laughter from the audiotorium in key scenes that should have cranked up other emotions.

Where Marvel have spent time and money and effort on getting the foundations right, Warners and DC seem to continue trying to throw everything at the screen just to see what sticks. Aquaman is another film with a subsequent clash of tones – as if production had initially started on something wanting to be quite deep and epic and then the notes had come down that critics had hated the somber Batman Vs Superman and Justice League and demanded a rewrite for something light and silly – and the final film can’t decide which to embrace. It’s clearly wanting to be that DC universe equivalent to Thor, but while Momoa’s innate charisma could arguably match Chris Hemsworth’s, it ultimately can’t carry the weight of everything else that’s absent from this outing.

The film has made considerable money since its release and the DVD release will likely double that so it would be wrong to wholly write off the enterprise as a failure – hey, any mainstream film with overt Lovecraftian nods has to have something going for it. Approach it with low-tide expectations and see it for the cash-cow it’s designed to be and it’s perfectly fine, if undemanding beer-and-fish-flavoured pizza fun. But it’s hard not to paint it (at best) as more like a good excuse for bad water puns… and a film that quickly proves out of its depth.

Aquaman is released on DVD today… 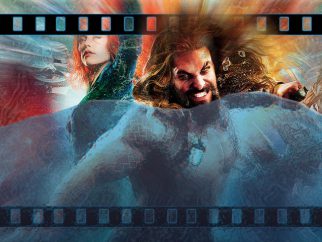