The 'Star Trek' universe contineus to expand with rumoured plans for Michelle Yeoh to have her own mini-series...

by John Mosby 11th November 2018
Michelle Yeoh was one of the big names attached to Star Trek: Discovery when it launched a year ago and though her initial character Captain Georgiou was (spoiler…) killed off almost immediately, an alternative ‘Mirror Universe’ version – one who had risen through the ranks to become a despotic emperor of a galactic dynasty – appeared later in the run and survived the later battles in the initial story-arc, a reluctant ally of our more moral heroes.
In an unaired coda to the final episode of the first season, it appeared that the renegade ‘Emperor Georgiou’, now a fugitive in our universe, was going to be recruited by Star Fleet’s shadowy sub-division known as Section 31, a group first mentioned in the Star Trek: Deep Space Nine series and who have apparently been around for a long while, particularly dealing with complicated time-travel and dimensional snafus.  It now looks as if Yeoh’s character, who will also return during Discovery‘s second season, may enjoy an even further longevity with a proposed mini-series of her own.  Though there’s no official confirmation as yet, it does seem that there are tentative plans to make Yeoh’s character the centre-piece for another spin-off. 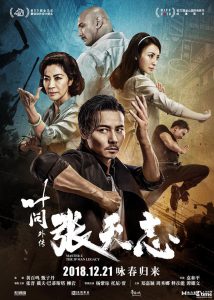 With the main Star Trek: Discovery series returning in January, the Star Trek Shorts being broadcast monthly, a new series starring an older Captain Picard currently being penned and an animated comedy series called Star Trek: Lower Decks ( from Rick and Morty writer Mike McMahan) getting a two-season order, then also adding a Michelle Yeoh vehicle to the mix certainly seems as if CBS (and its subscription service CBS All Access) is fully committing to the franchise.

Yeoh herself is pretty busy. She appeared in the feature film Crazy Rich Asians which took an impressive chunk of domestic and international box-office earlier this year and returns to some of her action roots for Master Z: Ip Man Legacy appearing alongside Max Zhang, Thai star Tony Jaa and Guardians of the Galaxy‘s Dave Bautista.
Tags
Michelle YeohStar Trek
Categories
EC NEWS
SHARE THIS ARTICLE
OLDER ARTICLE