'Demons of the Punjab' is Jodie Whittaker's second 'historical' and one of the best episodes of the new run so far...

As Yaz listens to some of the stories that her grandmother Umbreen tells of her youth she is interested by some of the details that she appears to be deliberately leaving out.  Given a recent (off-screen) mishap with Death-Eyed Turtles, Yaz feels the Doctor owes them a more personal trip and she convinces her to visit the Pakistan border in the late 1940s and the day of her grandmother’s wedding. Yaz promises not to interfere or endanger the flow of history but when the group arrive, Umbreen is getting ready for her wedding ceremony… to someone who clearly isn’t Yaz’s grandfather.

As word on the radio talks of the imminent Partition that will divide Pakistan and India and turn neighbours against each other, Umbreen (Amita Suman) and her apparent intended Prem (Shane Zaza), are determined to go through with their ceremony, despite their different religious backgrounds. But in the forest is a presence not of this Earth and it appears the ceremony may be cursed.

Can the Doctor locate the true threat to wedded bliss or will history dictate a far less matrimonial outcome?

Of the 2018 episodes broadcast to date, it’s telling that in a decidedly uneven flow, it is the two historicals that appear to have worked the best.  That may well be partly because we (and the Tardis team) are forewarned and forearmed about the scope of certain events that either sweep people up in their wake or are put into motion by them in the first place, but it’s also because alien worlds take time and money and sometimes stories work best in locales or situations that we recognise. Rosa was a strong and interesting episode with an important message but its positioning early on in the run and its tilt towards an American location, format and tone felt like an overt statement of intent: a series of bullet-points and hooks on which the show could establish one of its baselines. Demons of the Punjab feels much more organic and though it once again encourages audience to pick up a history book to look at the wider problems of the era, it’s built around a time and problem rather than an iconic figure and that helps keep things grounded and less formal.

By filming abroad – with Spain doubling for India – there is an epic feel to the sweeping backdrops that could never have been accomplished in the studio and director Jamie Childs uses them to good effect, bringing Vinjay Patel’s bittersweet story to life. By making the location rural – right on the border of the about-to-be-portioned India and Pakistan – it’s easier to generically dress the set for the time period without too many specifics and so more time can be spent on where to put the camera and focus on pace. While there’s some running and jumping and some special effects to be added in post, the episode feels less dramatically urgent than some of its recent chapters. Last week’s Conundrum saw everyone tearing around a space station, but much of this week’s is people walking and talking and avoiding the possible danger from the Demons of the title, but who largely keep their immediate distance. While there is an alien kink to the story, thus it’s not a ‘pure’ historical per se,  it’s good that the main aspect is as much an examination of humanity’s internal monsters as any perceived extraterrestrial threats.

With Demons of the Punjab we also have a story perfectly suited for Armistice Day, one that looks at the futility of war and artificial borders without needing to be as quite on-the-nose as Capaldi’s swansong on that Christmas Day football field. For most of the time, the guns are kept at a distance, lurking off-screen as a framing device for an oncoming storm and a wider wave of in-fighting and tragedy that the Doctor knows cannot be halted. The story becomes more about the individual striving to keep them at bay on a personal level. At one point the team walk through a field of poppies but it’s almost as if its incidental and subtle rather than ‘look what we did there…‘. The ‘demons’ of the piece (those not linked to human nature) turn out to be more benevolent aliens than originally anticipated with a remit to watch, not interfere but then memorialise the fallen and it’s an idea that feels very Moffaty in some regards.

Guest-stars Amita Suman, Shane Zaza and Hamza Jeetooa as Prem’s more militant brother Manish give us a family dynamic to invest in. With the story being about her ancestors, many thought that Mandip Gill would have a chance to shine but while the character of Yaz plays an important role, the nature of not altering time means that she is still a witness more than a participant and so some of her time is spent in set-up and frustrated exposition rather than many scenes of power. Indeed, the Doctor’s investigations aside, most of our regulars are supposed to be there to watch rather than be proactive, so despite their chaotic presence – and frankly, the ‘Doc’ should know better  – it’s largely a matter of not stepping on butterflies. There will be those who argue, fairly, that the show and the Doctor has a rather inconsistent relationship with changing history and ‘saving’ people, but this ultimately falls closer to Eccleston’s Father’s Day outing than Tennant’s Fires of Pompeii in the way that fates unfold.

A closer inspection might create some moral caveats and concerns over the conclusion that Patel gives us, but the episode feels to have the right amount of heart and ache it’s a shame that some of the other episodes to date have just missed the mark on that. Bradley Walsh continues to own his scenes and there may be reason (talks of bucket lists and family secrets)  to think that some of his dialogue portends to some darker times ahead regarding Graham’s health – but we’ll see.

All in all, a solid episode – one apparently originally slated for later in the run –  and definitely a sign that the disparate pieces of the production are starting to work together to good effect. 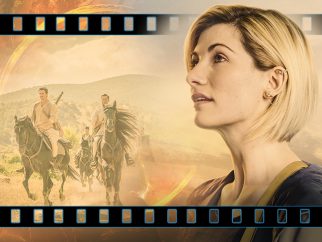