TNT finally brings 'The Alienist' to the screen, but despite an impressive checklist of factors, there's nothing new to see...

When a young child’s body is found on New York’s Williamsburg Bridge circa late 1800s,  it’s clear that a heinous murder has taken place. The boy, dressed as a girl and thought to be one of the young prostitutes at a local brothel and has been found with his eyes gouged out and his body mutilated. Doctor Lazlo Kreisler (Daniel Brühl ) an ‘alienist’ ( a doctor studying the mind and motivations in an early form of psychology), takes an interest in the case, believing it not to be the work of a syphalitic felon already in police custody, but of a much more dangerous kind of criminal.  However many in the police would prefer Kreisler kept his distance and not complicate what they’d prefer to see as quick justice or even a torrid but unimportant crime.

It soon becomes clear that Kreisler is right, but that won’t win him many friends – and in an era where forensic investigation and psychology are not part of the lexicon, how far will Kreisler and his few loyal colleagues and associates go to find the truth?

Given the amount of pre-publicity for TNT‘s latest new show, one could be forgiven for thinking that audiences had already seen most of the episodes of The Alienist. Hardly a commercial break had gone by without extensive advertorials and promos for the enterprise: a mixture of selected scenes here, moody montages there and also its leads wandering around the set solemnly discussing their artistic methods and motivations. If there’s such a think as murder-related overkill, then The Alienist was rapidly heading to saturation point.

Essentially, The Alienist and TNT are just a little too eager to present the series as something more than it is. The checklist of qualities are all self-evident and to be applauded, but they are also so familiar that they have enough tropes to hang themselves. Instead of feeling as epic and vital as the promotions painted it, The Alienist‘s uncomfortable subject-matter feels to have been created to comfortably fit a specific current trend.

Though the story is set in late 19th Century New York, this is very much a case of Jack the Ripper territory by way of Silence of the Lambs. Impressively created with lighting, costume design and perfectly-rendered FX backdrops, it’s a Budapest-based production that knows that mood is everything and establishing its specific earthy urban squalor backdrop is as important as any of the main players. It world-builds well, recreating a wide-screen look that fills the screen.

The Alienist might have been more compelling if it had reached the screen earlier. Several attempts have been considered since Caleb Carr released his original novel in 1994 before work began on this ten-part series for TNT. The problem is that the mini-series arrives after a wave of shows that have discovered darker hues of vintage drama and while The Alienist is beautifully rendered, it doesn’t feel quite as epic as it clearly wants to be. The likes of Tom Hardy’s Taboo proved there was an appetite for violence and viscera. The Alienist is less overtly thuggish and gothic, the quietly-seething approach to  murders and the sleazy surroundings somehow make it all seem a different kind of brutal. Rather than the sheer anger that bubbled under and above the surface in Taboo, the Alienist is almost sociopathic and apathetic about its backstreet carnage – an emphasis placed on just how little the murders of children affect the everyday lives of the exploited poor and downtrodden. The show’s rogue’s gallery is fine if you’re of the general belief that humanity will sink to whatever level it needs to survive.

Daniel Brühl as Dr. Laszlo Kreizler gives us a socially-awkward outsider, good at his job but often seen as intruding, abrasive and possessing very social skills to remedy such notions. He’s ahead of his time in some respects but equally sees himself bound too tightly by law and social niceties – if he needs the law broken, he’ll find someone to do it. A little like Sherlock Holmes, he’s good at deduction but his obsession with understanding the psychological attributes and blind to their affects on him, makes him more like an ancestor’s of Manhunter‘s Will Graham.

Luke Evans as New York Times illustrator John Moore provides more of an enigma…. a troubled man who’s not so much a friend for Kreizler as an associate, aware of the doctor’s talents and finding himself caught up in his wake.  Evans plays him as more than the brute force of the central trio, but in early episodes it’s hard to get a handle on just what makes him tick. He finds himself more haunted by the images of death he reproduces for Kreizler and has his own personal troubles, all too often seeking solace in the whorehouses of the district.

Dakota Fanning’s Sara Howard is a character at the earliest forefront of women’s rights, a junior part of a police force that, arguably, wouldn’t see much ‘need’ for respecting her gender for another century or more. While she’s literally straight-laced into the customary bodice (and with puffed-up sleeves that almost have their own zip-code), she’s one that understands that some rule-breaking may be necessary for her to do her job well, if not always ‘correctly’. She wants to be valued for her abilities alone and that puts her on collision course with many of the other characters.

With a solid cast and crew, there’s plenty to recommend The Alienist and it deserves to do well… it just seems a little too late to the party and a little too self-congratulatory in its own grand entrance.  It’s rendered well, but it feels as if designed by some true-crime committee with a now familiar go-to checklist and the result lacks the sense of distinctive, edgy, original alienation it desperately seeks to emulate… 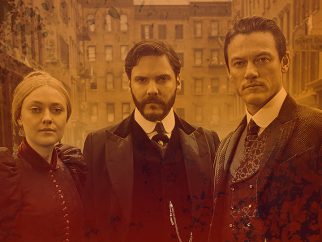