The horror genre loses another of its elder statesmen...

It’s been a tough year for the horror genre with the loss of several key movers and shakers. Earlier this year George A. Romero passed away and now comes news that Tobe Hooper,  one of the elder statesmen of horror, died this weekend at the age of 74.

The director is best known for landmark film outings that defined the genre long before more overt CGI took prominence. Such entries as The Texas Chainsaw Massacre, Poltergeist and the original classic mini-series Salem’s Lot, based on the novel by Stephen King, are all works for which he will be remembered.

The Texas Chainsaw Massacre, released in 1974 on a budget rumoured to be less than $300,000 was actually banned in several countries – it’s tale of a young group of friends finding themselves as the mercy of a group of cannibals being considered too gruesome for some – but still became one of the most profitable independent movies of the 1970s.  Leatherface, played by Gunnar Hansen and apparently loosely-based on real-life killer Ed Gein, became a seminal horror ‘bad guy’ for the ages. Hooper also went on to direct a sequel in 1986, though the approach was less serious than the original.

Hooper also directed Poltergeist, released in 1982 – it’s story of a family facing deadly supernatural forces within their suburban home also becoming an instant classic.  It was written and produced by Steven Spielberg and there’s still a question over how much Spielberg controlled the production. 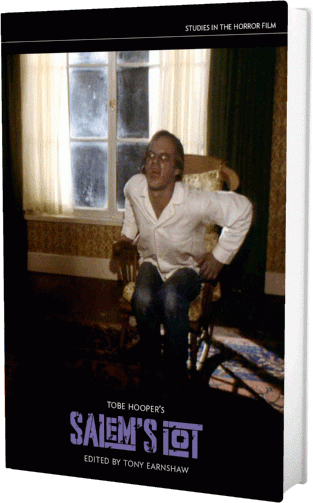 The 1979 mini-series for CBS, Salem’s Lot (which was also edited together and released as a theatrical film in some territories) has long been regarded as one of television’s best journeys into horror and certainly one of the medium’s best adaptations of Stephen King’s horror stories. The story, which featured a battle against the insidious vampires of the titular town, starred David Soul, James Mason, Lew Ayres, Bonnie Bedelia and Reggie Nalder. It has been regarded as a landmark of the genre  – few people can forget some of the iconic moments within its’ running time – and much has been written about its influence, including the acclaimed overview by Tony Earnshaw.

1985 saw Hooper helm Lifeforce, a film about naked space vampires that perhaps became infamous rather than famous for its subject-matter. It starred Patrick Stewart, Mathilda May, Nicholas Ball, Frank Finlay, Peter Firth and Steve Railsback and the film has become a somewhat guilty-pleasure for  cult horror fans despite the hardly awe-inspiring reviews it originally received.

Hooper’s more recent work had been far less prolific, but his impact on cinema and the world of horror is undeniable.