If you go back to the woods today, you're sure of very few big surprises, but a real sense of deja vu...

Is the Blair Witch sequel more pointless than point-of-view?
by admin 21st January 2017

Over fifteen years since his older sister went missing in the woods while trying to uncover the truth of an urban legend, James Donaghue (James Allen McCune) receives word that an old video-cam cartridge has been found in the woods near Burketville that may cast some explanation as to what happened. James’ friends are skeptical – after all search-parties and a lengthy investigation had never turned up anything, but as his friend Callie (Lisa Arlington) is makign a documentary project of her own, they decide to pursue the lead and document their search. Two other friends, Ashley (Corbin Reid) and Peter (Brandon Scott) are also talked into coming along.

When the group gets there, the young couple who found the tape (Lane and Talia played byWes Robinson and Valorie Curry) insist they believe something supernatural happened in the woods, but only agree to show the where they found the tape if they’re allowed to come along and share they’re equipment and resources. Despite some major reservations, it’s agreed But when strange things happen during the night, the group begin to suspect they’re being manipulated by the couple.  However it soon becomes clear they aren’t alone in the woods. Someone or something appears to be able to come and go at will and when the sun fails to rise the next morning, the group finds itself under attack…

Many many blood moons ago audiences were given a rare treat – the kind of scary movie that wasn’t quite like anything else on release. While Hollywood was packed out with slasher movies and big-budget titles, a little film called The Blair Witch Project sneaked into late 1990s movie-theaters and made quite the impact. It did so by going ‘old school’, relying purely on in-camera tricks and genuine real-world tension. A point-of-view format (before the revival and inferior imitations for which  it would be largely responsible) it gave the audiences the simulated sense of claustrophobia and just-out-of-sight frights that tap into something quite primal.

Despite early marketing tricks, including having the actors play ‘themselves’ it wasn’t the ‘true’ story it initially claimed to be, merely a well-developed fiction and format. And it wasn’t, as some might claim, one of the scariest movies ever made. But what it did do was rack up the sense of unease in a masterful way, playing with the very organic fear of  being lost and possibly hunted and then gave it all a short, sharp, shock ending that had audiences still talking about it years later. 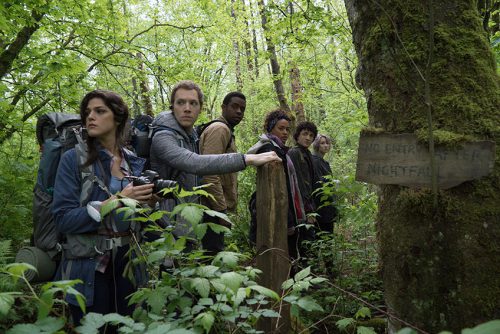 This latest film used its own marketing tricks – shooting under the title of The Woods, revealing only weeks before its release its true connection to the 1999 original and its new, rather familiar title. But the sad fact is that while a tad better than the immediate and rushed 2000 prequel, this project-less Blair Witch is pointless. With the exception of updating the technology available to our horror-hikers and increasing the number of people in the fright-frame, there’s absolutely nothing new to be seen or to be said in the thankfully brief running time. What felt new or at least rare at the time of the first movie now simply feels derivative of not only that film but of the countless movies since. In fact even the more naturalistic take of the 1999 film – the scares that could easily have been put down to paranoia rather than true supernatural danger – is quickly jettisoned for the 2016 remake. For a while you’re possibly wondering if the group’s unexpected local additions to the hike are responsible for some of the night terrors but even that possibility is quickly disposed of and their addition to proceedings seems unnecessary after that first act set-up. From then on, the cast of characters are enlisted to go through a list of silly decisions that any person in their right mind would avoid (Noooo, don’t go getting firewood alone! No, don’t run off in different directions!)

Story-wise, the plot can’t decide where it wants to go, so largely resorts to throwing sounds and brief glimpses of lights towards the less than happy campers with some dodgy CGI in the mix towards the end. A good portion of the film, particularly the last fifteen minutes or so are virtually impossible to follow: the camera jerking around through badly-lit forest branches, underground tunnels, spinning around and around as muffled noises and shouts confuse matters even further. That would be fine in smaller doses, but once you’ve gone a good (or bad) ten minutes without a clue over what is happening to whom and where, it’s tempting to jettison the DVD and head for the motion-sickess tablets.

Logic says that the film was a guaranteed misfire from before a single day of filming began – after all, it could only have ever been compared to the lightning-in-a-bottle original and always likely to be found wanting. Director Adam Wingard fails to measure up to any promise he might have shown in his segments for The ABCS of Death and V/H/S and shows he can’t do longer-form frights as well. Sadly the only scary thing is this unoriginal rural slaughterhouse is the pounding sense of deja-vu and opportunistic marketing. Perhaps an entirely new angle could have been proposed to make this seem worthwhile or at least interesting. Instead: this found-footage format gets completely lost.

Ding, dong… this Witch is pretty much dead on arrival.

Blair Witch is now on DVD release in both UK  (Region 2) and America (Region 1) formats.