‘Tis the season etc, etc… and somehow, despite that supposed ‘War on Christmas’ it’s impossible to turn on the television or find a screen in which the joys of the season aren’t being discussed, celebrated and decked out in all shades of holly.  It’s equally true that whatever your tastes, there’s likely a film to catch your mood. Here are three, very different, new movies that you could steer the sleigh towards this Christmas… 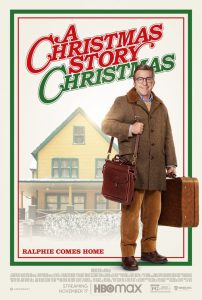 A Christmas Story is quintessential Americana which probably explains why it’s a staple of the Christmas period in the United States but far less well-known in other countries. For those that don’t know, it’s based on Jean Shepherd’s collection of short stories, In God We Trust, All Others Pay Cash. Set in the suburbs of 1940s Hohman, Indiana, it tells the story of the Parker family as they deal with the trials and tribulations of the days leading up to Christmas, all seen through the eyes of young Ralphie (Peter Billingsley) whose world consists of daydreaming, school-yard scuffles and hopes that he’ll get a ‘Red Ryder Range 200 Shot BB gun’ for Christmas. (Shepherd narrating the film as the older Ralphie). Originally released in 1983, it’s a gentle reminder of family strengths told both with nostalgic glee and a slightly subversive tone that makes it suitable for all ages.  Whether it’s Billingsley’s central performance, the able support of veteran mainstays such as Melinda Dillon and Darren McGavin as his parents or the memorable set-pieces (such as the tongue stuck-to-the-iced-pipe, visiting Santa at the Higbee’s department store, the one-legged table lamp – ‘Fraggggeeeellllay!‘ – or the word that isn’t ‘Fudge‘) it’s earned a place in the library of seasonal classics. Even if you don’t embrace it with quite the national zeal of some channels 24hr-marathon-showings, it’s hard not to see its original universal appeal. In 2012, it was selected for preservation in the United States National Film Registry by the Library of Congress for being ‘culturally, historically, or aesthetically significant’.

Inevitably a few follow-ups were made, some involving Shepherd’s participation, but few had more than tenuous connection to the original film or any real percentage of the original’s charm…and it’s taken forty years for a worthy successor to reach the screen.  A Christmas Story Christmas (showing on HBO Max) brings together many of the original cast.  Billingsley is back as Ralphie, now grown-up with a family of his own and the likes of Ian Petrella, Scott Schwartz, R. D. Robb, and Zack Ward reprised their roles of childhood  friends/enemies Randy Parker, Flick, Schwartz, and Scut Farkus, respectively. Darren McGavin passed away in 2006 and Melinda Dillon has been retired from acting for over a decade and here her role as Ralphie’s mother is taken by Julie Hagerty… but in many ways it’s a reunion.

For this sequel, set in 1973, Ralphie is getting ready to revisit his parents, bringing along his own wife (Erinn Hayes as Sandy) and two kids (Julianna Layne as Julie, River Drosche as Mark) when he hears the devastating news that his ‘Old Man’ has died. It casts a shadow over the holiday, but arriving at his old home, Ralphie is determined to give his family a Christmas to remember in order to honour his father and his fond memories. of course, this being Ralphie, things are never going to go quite according to plan and before long his plans go awry when his load of Christmas gifts (yes, purchased from Higbee’s) are stolen and two snowmobiling bullies make their mark.

Sequels often retread old ground in a bid to be relevant, but A Christmas Story Christmas walks the difficult line between double-edged nostalgia. It honours the original’s tone and style without ever feeling like it’s just copying it in some opportunistic way. Billingsley’s Ralphie may be frustrated by his lack of success as an author and events that are outside his control, but he’s never seen as a grown-up loser or a subject of pity or fun – he’s actually a valiant father simply trying to navigate life and his ideals and coping with relaity in his own way. Yes, there are plenty of nods and homages to certain moments in the first film, but equally some zigs instead of zags and a few nice subversions to expectations. It’s an unapologetically gentle, optimistic in its outlook – perhaps somethign we can all use – and a tale that suggests you can go home again, as long as you understand that things will always change, for better and worse. It also acts as a great bookend to the original and even if that 24hr marathon of the 1983 film is far too much for you to swallow after plate-loads of turkey, one can imagine an American family making the two films a nice double-bill for the holidays. 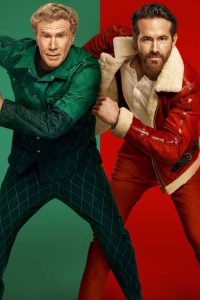 There’s no shortage of movies depicting or directly tied to Charles Dickens and A Christmas Carol. You could probably spend the entire holiday period watching different versions of Scrooge’s redemption and never watch the same one twice. The latest version is Spirited on Apple TV+…

The conceit is a decent one: that since the days of Scrooge, the whole enterprise of scaring ne’er-do-wells into better behaviour has been somewhat industrialised – now there’s a whole spiritual department and afterlife company spending all year micro-managing and resourcing methods of redemption. It’s an organisation with an infinite budget and the ability to conjure up whatever is needed on an annual basis.

The Ghost of Christmas Present (Will Ferrell) is being pestered to retire after two hundred years of service, but he spots a high-flying mover-and-shaker named Briggs – a man of such morally-questionable actions that he could prove the biggest challenge of the organisation’s career. Clint Briggs may or may not be irredeemable, but what he most definitely is is a master manipulator and it isn’t long before he’s not only reaffirming his own stance but starting to make Ferrel’s spirit also question his own life choices.  Sunita Mani plays The Ghost of Christmas Past (who’s quite enamoured of the new target) and Tracy Morgan voices The Ghost of Christmas Yet to Come (who bemoans his pose-and-point limitations) but while they’re bemused and frustrated with Clint’s behaviour, it’s ‘Present’ that feels the imperative to stop him. So begins something of a contest as both men face pivotal moments that will decide their fate.

Reynolds has become the go-to-guy for wise-cracking anti-heroes and though he’s on safe ground here, it’s good to see him in mainly family-fare territory yet without losing his edge.  He walks the line between being the guy you want to see converted away from the dark side (or, in this case, merely subjectively tarnished) and yet the person who you admire for side-stepping the obstacles being placed in his path.

Ferrell, a comedy veteran is something of a marmite actor who can run a little too wild and wacky depending on the material but here he reins it in just enough to be endearing and even charming.  He’s established himself as having a decent singing voice in other projects, but here he slides fairly effortlessly into the musical numbers and makes them work. (The only gripe is that – as my wife noted – how perfect a vehicle would this have been for a Ryan Reynolds / Hugh Jackman team-up, given their established bromance and Jackman’s own high-calibre musical credentials? It seems like a missed opportunity.)

Stuffed to the Christmas rafters with seasonal tunes (a majority of them feeling worthy of a full-on Broadway musical). some notable cameos and in-jokes, this is a swift ninety minutes of fun that only lags occasionally (the middle act could have been tighter). It’s impossible to deny the sheer energy of the piece. It’s full of feet-tapping tunes and presented with a supporting chorus cast of dancers who make it all zing.  A few slightly risque jokes aside this is a family-friendly outing that plays to its obvious strengths and if even the subversion of the concept seems a bit predictable, it’s hard not to be swept along with the innate goodwill spirit of it all. It’s not quite a Christmas classic, but it’s a great diversion… 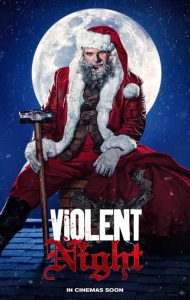 Violent Night – at cinemas mere days ago but now also available for streaming on Amazon Prime – is essentially the guilty pleasure of Christmas, something to slip in to once the kids are in bed and the liquor cabinet is unlocked… it’s Home Alone for adults, Die Hard 2 if Quentin Tarantino did unspeakable things to the Elf on the Shelf (or, perhaps, the other way around). The tone is a bit inconsistent, sending Santa’s sleigh veering (sometimes literally) between exploitation cinema, Farrelly Brothers gags, broad slapstick comedy and well-judged, less sardonic sweetness, but it’s hard not to wince and smile in equal measure. It doesn’t re-invent the wheel but grabs the whole cart/sleigh load of askew homages, reaching out and embracing every awkward seasonal shuffle and throws them together with manic glee. Director Tommy Wirkola is probably best known for What Happened to Monday (2017) and cult-hit horror Dead Snow (2009) but this feels like the most commercial effort to date.

David Harbour is clearly enjoying every bloody minute. An actor who has had success as both the good buy and bad guy in many an outing, he pivots well between the medieval chaos he renders with hammers, nails and sharp, sharp star decorations and a lightness of touch when dealing with kids. At some points he’s the weathered old-man who realises that his image has been incorporated and has decides to find solace in the alcoholic advantages of every available bottle and yet can also sparkle when he encounters the rare find of people who are genuinely deserving of the seasonal spirit of old. He’s a PTSD warrior on a mission and the results of the Good/Naughty List are more extreme than ever. Man-mountain Harbour handles the script and the physical demands well and it’s on his shoulders that much of the film rests.

With all due respect to the talented actor, John Leguizamo is the weaker link in the casting choices here. He plays the ‘master-criminal whose intricate, carefully-laid plans for a robbery crash into carnage over the holiday weekend’ bad-guy as a petulant hoodlum who just happens to hate Christmas… when the story really requires a more arched nemesis, ironically something of an Alan Rickman interpretation or even someone known for their sweetness playing overtly against type and eating the scenery and a valiant, more memorable rival to our ‘hero’.

Leah Brady as Trudy, the essential almost-innocent of the piece, is great – an adorable ankle-biter who anchors the needed sweetness and keeps Santa (and the film) from veering off too far into unredeemable territory. The wider Lightstone family fair less well in the script. Her estranged parents Alex Hassell (as Jason) and  Alexis Louder (as Linda) are trying to work out a way to extract themselves from the gathering, but the other members of the ensemble are sketched-in grotesques. Edi Patterson as Alva, her media-obsessed son Bertrude (Alexander Elliot) and idiot actor boyfriend  Morgan (Cam Gigandet) are all vain money-grabbers straight out of pantomine-territory and foul-mouthed, plastic-faced matriarch Beverly D’Angelo isn’t given enough to do after establishing her credentials. Essentially, they all become props for the chaos that follows. And… what follows are increasingly bloody ways of terminating the threat of the hostage-takers. You’ll laugh, groan and ‘ewwwwwwwwwwwwww‘ as the various goons and henchmen end up as collateral damage in the most disgusting ways. And you’ll laugh, which is the main thing.