She-Hulk: Much Ado about Sense, Sensibility, the Bride and Prejudice…

She-Hulk swerves into a standalone episode as 'Just' Jen heads to a wedding. What could possibly go right?

Things may be busy at the office and the timing might be terrible, but when Jen receives an invite to be a bridesmaid at an old friend’s wedding it’s an offer she cannot refuse. But is she attending as ‘Just Jen’ or as ‘She-Hulk’… and just who is getting ready to gatecrash proceedings?

She-Hulk: Attorney at Law is a decent side-dish of fun, enjoyable as a quick diversion in the moment, but it’s getting harder and harder to work up the desire to review something that really doesn’t stick with you mere seconds after the credits roll – extra scene or not. (And no, no extras this week).

One has to at least give credit to She-Hulk: Attorney at Law for admitting to the notion of stalling. Breaking the fourth wall again, Jennifer notes that placing a standalone wedding episode (Just Jen) in the middle of the season (thus delaying any real forward momentum) is being used because ‘weddings always happen inconveniently’ and involve their own mini-dramas. That being said, it’s a convenient excuse and Just Jen is once again more a series of sketches and punchlines and has to be judged accordingly. Less a Westeros-level of bloody nuptials and more a riff on Bridesmaids, the drama is in the snark between characters and Jen once again trying to find that balance between people who like her as Jen and those who prefer the She-Hulk form (and vice versa). Apart from moments of genuine familiarity for anyone who’s been to such an event and experienced the cringe factor of  now-distant people desperately trying to find common-ground, it dosn’t really have more to say. The arrival of Titaina, a bouquet of barbed ire if ever there was, feels like the needless extension of last week’s joke and a needless encore. With this one-note version of Titania, less would indeed be more.

Ironically for an episode entitled Just Jen, the B-story is far more interesting than the wedding and is a side-case that Jen’s co-workers, Nikki (Ginger Gonzaga) and Mallory (Renée Elise Goldsberry) are dealing with back at the office. It turns out they have a new client – because hey, the Superhuman Division isn’t all about Jen’s problems. Craig Hollis is a gentleman who likes to be called Mr Immortal and has such ‘confrontation issues’ that he regularly ‘dies’ just to escape marriages – and his collective wives (and husband) are out for collective compensation. The strongest laugh-out-loud moment of the episode is when he throws himself out of a window merely to escape the GLK&H lawyers who may be willing to represent him but who are hardly showing him any sympathy or pity. Passive-aggressive, much? (The character actually exists in Marvel comics, though in a somewhat different scenario and is played here by David Pasquesi – last seen as the fawning Majordomo in The Book of Boba Fett).

The dangling tease at the end is that the Intelligentsia website is not just a vile hub of misogynistic rants against She-Hulk and women in general but might be the front for the group trying to acquire Jen’s blood (for no doubt nefarious purposes) and so likely to be the main antagonists for the rest of the season’s run in some way or another. 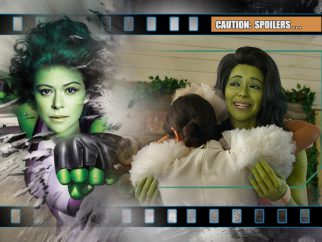 Pre-destination: Disney’s ‘Andor’ is all Black Market and Blue Collar…

Thrust and Parry: Tolkien’s worriers and warriors start to choose their sides…