Pre-destination: Disney’s ‘Andor’ is all Black Market and Blue Collar…

An Older New Hope? The new prequel prequel could be far, far away the best Star Wars series entry in some time...

On the corporate world of Morlana One, a lone figure enters the seedy-but expensive side of the ‘downtown’ area. He is Cassian Andor, searching up any clue to the whereabouts of his long-lost sister. It appears she worked for a time in a high-end brothel but is now long gone. Unfortunately, Andor catches the attention of two corrupt beat officers who try to extort everything in his wallet but when he resists, it ends up with the officers dead and with Andor scurrying back to his workplace homeworld on Ferrix.

What might have been an unfortunate encounter, one gloomily dismissed by the authorities as ‘bad things happening to bad people’ does not end that way. An ambitious zealous junior officer decides to make his mark by hunting down the ‘killer’ and making an example of him… thus setting into motion events that will have far-reaching consequences.

Cassian Andor now has a price on his head and in these backwater worlds, he has but a handful of friends and ‘family’ to count on and even they are tired of his tribulations. But other people may be interested in Andor and he has no idea about the chaos about to surround him…

It might have been a surprise to have THREE episodes of Andor dropping to Disney+ on the same day – I mean (acquiring a Tony Hancock voice…) that’s ‘very nearly an armful‘ / a whole third of a series all at once. But the laconic speed at which the story leisurely unfolds probably points to the factors behind the decision. While feature films have told a majority of their tale in a similar 180 or so minutes and the other Disney/Lucasfilm series ventures to date would have had whizzed along at thrice the speed and perhaps a third the lack of pleasure, Andor deliberately meanders through its grubby streets and junkyard-filled cul-de-sacs, setting up the ensemble and the stakes and in no hurry to get where it’s going… but still has plenty of quiet earnest in every moment of its delivery before it eventually takes off.

This is somehow both quintessential Star Wars and something quite different than anything previously offered. Away from the movies, the likes of The Mandalorian and The Book of Boba Fett have largely celebrated the iconic – the helmets, costumes, creatures and starships, trading in the familiar Lucasfilm designs, eager to establish parallels and touchstones with the paraphernalia and ephemera of the franchise and all being excavated or digitised to best effect… sometimes becoming little more than a conveyor-belt of nostalgia and an opportunistic launch-pad for tie-in merchandise. Andor does the opposite in terms of presentation. It’s not here for your money – at least not yet – it’s here for your attention. For most of the three episodes you could simply remove the sprinkling of references to the ‘Empire’ and a few familiar computer-screen graphics and there’d be absolutely nothing to suggest this was the same galaxy, far, far away, but a different and unconnected story creating its foundations and framework. In all the important ways it’s just the universal story of downtrodden people trying to get by and though it’s another planet it’s essentially just a story of drawing blue-collar battle-lines.

Television series, even those with higher budgets, often feel like expensive back-lots where it’s not hard to imagine the camera-crews lurking just off-screen, boom-mikes and Starbucks cups at the ready. But though there are plenty of generic back-alleys here serving a rat-run purposing, there’s also plenty of other environments that defy the sound-stage origins.  You can imagine getting lost in some of these places – be they wet, neon streets or dusty engineering workshops or plentiful forests with indigenous natives. A central mining facility looks entirely real, less like the imagination of a programmer and more like a genuine refinery with a few added banners fit for purpose. Yes, there’s a shuttle-craft that’s so retro-bus and filled with off-beat characters that it might have appeared in a quirky Doctor Who episode, but still almost works. In other words, it’s not just bloody Tatooine anymore (which for a backwater planet certainly seems to be making itself known as the ‘Ooooh, look, we have two suns!‘ destination of choice…).

Diego Luna, as the titular Andor, reprises the role he famously created in Rogue One as we now explore his entry into the Rebellion and he anchors the endeavour well. Luna has that rough-and-ready look of someone who might break hearts given better times and timing, but for the most part his Cassius Andor is just an average joe trying to get by and yet a constant magnet for trouble. You get the feeling that while his debts are mounting, he does have every intention of paying people back and delivering on all his promises… it’s just that things always get complicated and staying one step ahead of trouble becomes the default. There’s no doubt that he’s the dirty-faced hero of the tale, but by the end of our first encounter with him, he’s a killer, arguably a murderer, though only one by circumstance and when threatened first… and by the end of the third episode he’s killed again but takes no joy in it and actually spares lives he could and maybe should have taken. Cassian Andor is not a man of artificial mystery such as The Mandalorian‘s Din Djarin, but one who’s actual life is a complicated throughline of survival and deceit – going from very rural backwater to very urban backwater and adapting to both. This series (which will cover two seasons) gives nuance to the character we met in Rogue One and feels far more organic in its telling of a reluctant hero’s journey.

The episodes are intercut with scenes from Cassian’s past on his home planet of Kenari (the younger version being played by Antonio Viña) underscoring the changes in fortune he had when whisked away from an almost idealistic but compromised woodland world being poisoned by Imperial frontier mining. There’s a few moments where the time-line is confusing, but ultimately a montage themed on consequential escapes brings the two together well by the end of the third chapter.

Good Omens‘ Adria Arjona plays the female lead, Bix Caleen – very much in the vein of many a modern heroine – a mixture of capable, feisty and yet somehow never as appreciated as they should be as they gaze towards a better day. There’s an intensity to her and Arjona gives us another character to invest in which I hope we’ll continue to see, even as the action moves off-world and into more familiar Lucasfilm territory.

We only get to meet Stellan Skarsgård’s enigmatic Luthen Rael in the later stages of these released episodes but he makes an impact. Essentially, he’s just there to buy some of Cassian’s more obscure machinery but has done his research and knows far more about Andor’s past than he should. Though somewhat whiskered and wearing robes, he’s not a Jedi – far from it – but a person who has a large part to play in connecting the dots for the fledgling Rebellion and wants to recruit the scavenger to be part of their operation. Circumstances force them together and they’ll need each other to survive and get off world – though they leave carnage in their wake.

It shouldn’t be a surprise that Fiona Shaw almost steals the show. After all, this is an actor who has, time and time again, won awards for her work on film, television and stage, but somehow each performance sneaks up on you with a fearless, subversive grace. Here, as Maarva Andor, Cassian’s adoptive mother, she’s bruised and battered and weathered by the world, but is unwilling to give an inch when trouble comes knocking to the walls of her humble home. Though something inside her breaks, there’s not a second where she’ll give up her ‘son’ or where the audience would expect her to. Her lecture on the nature of ‘a reckoning‘ that she delivers to her captors, just as the warning clangs of the streets suddenly fall into scary silence, is a wonderful moment and a great combination of performance, direction and editing.

Elsewhere, there’s a raft of strong supporting characters, with Kyle Soller as a low-raking Imperial officer Syril Karn (the kind of  opportunistic jobsworth given rotten, self-aggrandising purpose in a menial Arnold-Rimmer-eqsue position and determined to make his mark). He has the spineless sense of quiet zeal that you instantly despise and want to see obliquely punished, though despite his pursuit going badly, he remains annoying alive.

Amid the grime, there is one requisite nod to toys with a rumbling, stuttering vacuum-sized droid named B2EMO who looks like a cross between Wall-E, Vincent from The Black Hole and Huey from Silent Running and who spends most of the episodes being shuttled from one place to another with urgent messages.

Directed with assured aplomb by Rogue One, Jason Bourne and Michael Clayton auteur Tony Gilroy, no stranger to putting character ahead of studio pace, this is largely excellent stuff – combining high adventure and low-life grime. It would be ironic if the Star Wars mythology, one that originally began with A New Hope now has its future resting on a show with a far bleaker outlook – a prequel to a prequel that already dictates an ending that will be far from ‘happy’.

But this is, finally, Star Wars growing up, getting rid of the cosmic crutch of the Skywalker name and its Force-full baggage and actually giving us something that’s far, far away overdue…. 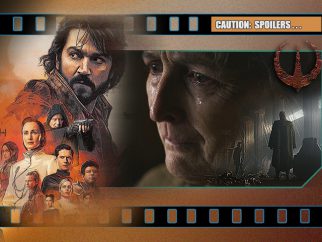 She-Hulk: Much Ado about Sense, Sensibility, the Bride and Prejudice…