Halfway through the season, SNW spins a compelling morality tale with no easy answers...

The Enterprise intervenes when a transport, near the planet of Majalis, is under attack – managing to beam off three people before the ship is lost and the very insistent pursuers are forced to crash-land . It turns out that the transport’s survivors are a man, a woman and a boy. The woman is called Alora and she and Pike already have a… history. Her two companions are Gamal and his biological son. The young boy is referred to as the ‘First Servant’, a child whose destiny is to become anointed in a historical ceremony that is believed to ensure the planet’s survival.

But why was the transport attacked? Alora says she believes that the cultural value of the young boy has been noted by a nearby alien race and the attack was a kidnap attempt in search of generating a ransom. Though Majalis with its maxim of ‘Science. Service. Sacrifice‘ shuns a lot of outside contact, Alora welcomes the help Pike has given and swears to uphold the child’s safety until the ceremony can begin.

However, it becomes clear that there’s far more to the attack – and far more at stake – than is being revealed…

So far Strange New Worlds has offered entertaining interesting variations on a theme – successfully mixing the stories you might have found in The Original Series with more of the nuance and superior VFX you’ll find in a modern tv landscape. There’s been the sense of fun and whimsy and an optimism missing in other branded shows. But the sixth episode, entitled Lift Us Where Suffering Cannot Reach, turns out to be as grim and profound as its moniker and doesn’t offer any of the easy answers and resolutions that you might have expected.

Things start off lightly- enough. Pike and his unfeasibly Johnny Bravo-esque hair turn out to have some more Kirk-like attributes when the Enterprise saves a ship under attack and ends up beaming aboard an old flame, one with whom he ends up rekindling some sparks of the horizontal variety.  It’s not quite as opportunistic as the James T. era – there’s at least some backstory  and shared history before the lip-locking – but it’s both a Trek-like excuse for some romance and also an opportunity to reference Pike’s knowledge of his future and how he’s seizing the moment. (But, seriously, for something you’d expect to be a personal and perhaps secretive matter, is there anyone who doesn’t know about Pike’s fateful visions of his fate?)

The Librarians‘ Lindy Booth plays Alora, the alluring lady in question, one who makes no secret of her continued attraction to Pike and who makes it clear she’d be very happy for him to join her on her planet in a more permanent capacity. And you don’t have to be a seasoned franchise viewer to quickly smell a rat, though it’s hard to put a finger on what deception is afoot as the story unfolds. It’s Number One / Una that begins to bristle at the convenience of it all and the gaps in information that might cast a different light on events. It’s perhaps that last aspect that requires a suspension of disbelief – this is the kind of story where not enough people are asking the right questions and one where the whole cascade of events could have been avoided by people being more vigilant and upfront earlier. However the moral complexity of the story holds the attention as we learn more and head towards the end.

As noted, that ending is uncomfortable. Pike and the Enterprise save the young (Ian Ho), only for Alora to whisk him off for what turns out to be little more than a ritual sacrifice, wiring him into a planetary battery that will gradually drain him of his lifeforce. Pike is powerless to stop it and is sickened by the planet sacrificing a child, though Alora points out that the people of Majalis don’t hide their part in the procedure and don’t turn away from their culpability – accepting the burden. She wonders if Pike’s people can hold any kind of moral judgement given that, far too often, others pretend to be appalled by what they yet don’t seek to change if it benefits the majority. A pointed observation though it may be, it’s hardly a moral equivalency and it’s surprising how surprised Alora is with Pike’s revulsion and wanting to get as far away from her and Majalis as possible. It does cast a different hue over preceding events and we realise that the ‘pirates’ from the start, in league with Gamal, were actually trying to save the child, not hurt him.

There’s a parallel story with Doctor M’Benga (Babs Olusanmokun) wondering whether Gamal and the technology of those on Majalis could and would share their impressive technology to help cure his daughter (whom you’ll remember is being kept in that pattern-buffer to preserve her state). Though he can’t cure her, Gamal – spurred on by the loss of his own child – gives M’Benga some hope that progress can be made. Celia Rose Gooding as Uhura, continues to be one of the characters that the show uses as a mainstay viewpoint, here using her a language abilities to reveal some inconsistencies in the computer reports and cast doubt on the ‘official’ line.

This is a deeper and more nuanced episode than the casual viewer would have settled down to see, but it speaks to the show’s scale of ambition. (The basic idea of the story has been played out in other parts of the sf genre, perhaps more obviously in Ursula K. LeGuin’s short story The Ones Who Walk Away From Omelas).   Any criticism that Strange New Worlds – great fun though it is – is merely trading on the nostalgia and goodwill of The Original Series, seems to be dispelled. Lift Us Where Suffering Cannot Reach, marking something of a halfway point for the show, suggests that the show is also carving its own niche, not standing on the shoulders of giants, but reaching for its own place in the pantheon… 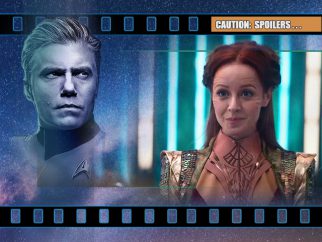 Fight or Flight: Kenobi’s tale sees Revenge in the Fifth….