Disney+'s latest goes above a mere minority mandate with an engaging, youthful debut...

Kamala Khan is a young Pakistani Muslim girl living in New Jersey, cautiously navigating her teenage years – split between hanging out with a small group of friends, circumventing the stricter rules of her parents and collecting anything she can about her favourite superhero Captain Marvel. It isn’t always easy and she often finds pulled between traditions of the past and her hopes for the future.

But things are about to change. Sneaking away to attend ‘Avengercon‘ her cosplay is about to be more successful than she ever imagined…

The wave of Disney+ Marvel offerings seems to work under the mission statement of providing something for everyone across their multiversal slate. Some projects have gone with mythology-heavy arcs and others with a more askew approach that doesn’t require a decade of continuity. However, Ms. Marvel is probably the first easy-access, entry-level offering. It helps if you know some of the Avengers movies and the characters referenced but for much of the premiere episode’s running-time this could be a show set outside the MCU with has a central character who simply likes the movies.

Ms. Marvel, the comic-book, received a great deal of attention when the most recent version of the character debuted in February 2014. It was the first time a female Muslim character had headlined her own title and the comic deftly managed the balance the idea of how a young ethnic girl would cope with the shifting ground of being a teenager, being a member of an often casually-maligned faith and discovering a super-powered family secret. All three aspects would be difficult enough to navigate individually but put them together – or rather watch them collide – and you had the building-blocks of a welcome, contemporary tale that reached out to a new, often under-represented audience as much as the party-faithful. The new Disney+ series aims to do the same, albeit with a few tweaks.

In fact, look at the ‘Phase 4’ of the Marvel Cinematic Universe expansion and it’s unapologetically about expanding an inclusive base that was, not so long ago, still a box-office club for white males. After Chadwick Boseman’s Black Panther (2018) and its massive cultural impact, Marvel have unapologetically, if belatedly, begun an overt outreach program acknowledging the potential and sheer profitability of previously ignored demographics. In the last couple of years  had the likes of   Simu Liu’s Shang-Chi, (alongside Michelle Yeoh, Benedict Wong and Awkwafina) and in Eternals we havePhastos (played by Brian Tyree Henry) who is a married gay man with a young son.

But one can look too deeply into the industry’s social awareness and  marketing mechanics and analyse this new show too deeply… instead of just enjoying it for what it is. (Every MCU production needs to be attractive, but not every entry has to include an existential crisis or world-ending spectacle). To acknowledge and admit that Ms.Marvel is aimed at a younger audience than some of the other Marvel shows is a given and it does no disservice when judged accordingly- the mixture of teenage angst and stylised background graphics stake out such territorial boundaries from the start. The fact it won’t appeal to everyone is no huge criticism of show or audience.  Yes, there’s a moment near the start where you wonder, despite the good intentions, if it’s trying just a little too hard to be contemporary with a potential checklist of what it thinks that younger audience might want – which, primetime history has taught us, can be transient and shifting in the moment. But, thankfully, it’s also true that it’s a show that knows you have to like its cast before you’re interested in anything deeper. It has to teach you to care… and it does.

Titular actor and newcomer Iman Vellani is the key to doing that, making Kamala Khan less of a mere tropey-template and more of an awkward, well-intentioned, conflicted mess that simply speaks to being a teenager. She’s not the popular girl in the school but neither is she a pariah. She’s loyal get rebellious, simply in that adolescent chasm between the welcome safety-net of being a kid, the upcoming demands of being an adult and feeling somewhat trapped in a home where her parents are seeing the signs of change and digging in their heels. In short, Vellani quickly makes Kamala accessible and likeable and half the battle is won.

The pilot episode is the scene-setter, establishing Kamala’s world and social circle and placing it in the post-Endgame 616 continuity that often treats superheroes as celebrities and has some awareness of their universe-saving escapades. There’s references to Thanos, if not his ‘Blip’ and Kamala likes Ms. Marvel the same way some like Beyonce. There’s conventions to attend (though the series’ AvengerCon doesn’t seem ready to compete with the SDCC just yet!), merchandise to buy and cosplay opportunities galore. (It’s the PG-rated kid-friendly end of a cultural shift that a series like The Boys takes to full R-rated hedonism).  With Kamala only discovering her power-base in the last act of the opener, there’s still much to explore. So far there’s no real cosmic threat to test her, though there are rumours of other Disney+/Marvel players appearing down the line and an epilogue suggests the display of her new powers has attracted the attention of what appears to be a government agency.

It’s still unclear the exact source of Kamala’s power – though it appears linked to the magical/cosmic properties of an antique bracelet and heirloom she receives a shift from the comics’ more complex set-up. Her power-set seems to be creating and extending herself in a way reminiscent of Green Lantern but with more sparkles, though that’s likely to be clarified and nuanced in the weeks to come. 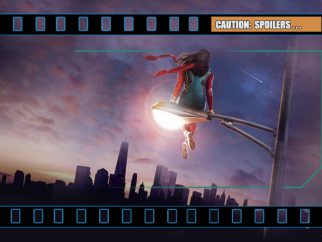