‘Worlds’ Enough and Time: New Old Trek is best of both…

Neither new nor strange, the latest Trek still manages to capture the original spirit of the franchise....

Stardate 1739.2  – On Earth, specifically snowy Montana, Christopher Pike is trying to make some hard choices about his life. Given a glimpse into a pre-determined future which will see him horribly crippled in an event still a decade away, Pike is unsure whether he wants to step back onboard the USS Enterprise. But when news comes that his loyal ‘Number One’ has gone missing during a potential ‘first contact’ situation he feels duty-bound to lead the mission to retrieve her and her crewmates.

But when facing a situation that defies the normal conditions for a first contact mission, Pike finds himself on a world where technology has taken a sudden leap forward and for which the Federation may bear some responsibility. The rule book doesn’t cover such an awkward situation, so Pike, his science officer Spock and the Enterprise crew may have to improvise…

There’s been much anticipation for the new Star Trek series Strange New Worlds. Though it takes its moniker from the famous monologue at the start of the original, there’s truthfully very little that’s strange or new in the pilot. But that’s no bad thing as the new show cherry-picks the very best and familiar elements from the classic show and imbues them with a fresh shine and sheen.

This time the captain is not James T. Kirk but Christopher Pike. Long-time, die-hard fans know that Pike, first played by Jeffrey Hunter, was in command of the Enterprise during the show’s first unaired pilot (The Cage). The concept and show would be retooled for William Shatner when Hunter declined to return for the second pilot The Man Trap. Pike / Hunter would later appear in a subsequent two-parter The Menagerie which used archive footage from the unaired pilot and featured a severely crippled and burnt Pike (Sean Kenney) returning to the planet of the original story with the help of Leonard Nimoy’s Spock –  and against strict Star Fleet rules – the show exploring his reasons and his fate.

In the modern era Anson Mount played the character in the second season of  Star Trek:Discovery where a joint away mission led to Pike getting a celestial vision of the horror in his future and a glimpse at the accident that would end his career. The episodes, also featuring Ethan Peck as Spock and Rebecca Romijn as ‘Number One’ proved very popular and led to the commissioning of this new show featuring Mount, Peck, Romijn and expanding out the crew roster.

Mount, as proven in Discovery, has some serious screen presence, sharing the workload among the talented ensemble but with broad enough shoulders to be the Captain of the ship and the show. (He’s come a long way since his days opposite Britney Spears in Crossroads). There’s an echo of Kirk’s irreverent humour and willingness to wing it when the rulebook doesn’t work (and even that he’s quite a hit with the ladies) but Mount never lets Pike be a mere James. T. clone – establishing a firmer tone, a more weathered, astute persona and one with an added edge of inevitable foreboding. But there’s a joy to this Pike that’s infectious… a man who becomes determined to accept and embrace the quirks and sardonic mood of someone who resolves to make every moment a life well lived.

Ethan Peck gives us a nuanced Spock. Some will bristle that the show is showing him in a relationship and displaying emotions (Sheldon Cooper would swoon at the thought) but there’s no discrepancy here – Vulcans do have strong emotions, they just pride themselves on not displaying them all the time and always using logic first. There’s a continuing repartee between Spock and Pike, reminiscent of the eventual bond between Spock and Kirk (which we know will evolve a decade down the line) but the nuances of loyalty and respect are there to see.  The humour is important – Mount’s Pike can land a zinger with great timing and there’s nothing quite like the moment when Spock, beaming down to the planet’s surface in disguise and in unexpected clothing asks “Captain, where are my pants?”

Though we’ll have to see how things develop, I already know and care more about the supporting cast after one episode than I do about the Discovery‘s bridge crew after four seasons. It’s true that some bear names and job-descriptions that reflect past entries, but the actors appear all-set to make them their own. Jess Bush as Nurse Christine Chapel is bright and witty, Celia Rose Gooding as Cadet Nyota Uhura makes a convincing young Nichelle Nicholls, Melissa Navia as Lt. Erica Ortegas brims with confidence, Babs Olusanmokun as Dr. M’Benga has workplace wit and  Christina Chong as La’an Noonien-Singh has a back-story and lineage that’s obviously going to come into play as things progress. I want to know more and I expect Strange New Worlds to deliver.

Pilots are notoriously difficult ships to steer – needing an exposition dump, immediate character-development but with a pace that sets out the fun to come… Strange New Worlds – the title of the episode itself – has a plot that isn’t too complex or hard to fathom but is deliberately topical. The anomaly events of Discovery‘s second season have led a distant society to witness technology before it naturally evolved on that world, suddenly enabling advances and it is on the edge of a power-struggle to harness the tech as a weapon to win a war not a tool to move to the stars. The parallels to the conflicts of 21st Century Earth and the choices it faces are not only a metaphor but directly referenced. Yes, it’s very on-the-nose and on-message, but it encapsulates Trek‘s enduring mission statement beyond the five years and parcels it with a sense of topicality and fun so that the pulpit isn’t of the bully variety.

If Discovery suffers from not being sure what it wants to be, circling an event horizon of its own making and Picard stoops under the sheer weight of its own reverential mythology, Strange New Worlds positively flies off the screen, celebrating a golden age with a knowing nostalgic flair and applying those sensibilities to a modern era without wincing at the weight. The new show might run the risk of being too ‘fun’ in an era that often goes to the dark side, but it deftly balances a lightness of touch with that ‘sword of Damocles’ foreknowledge that hangs like a shadow over Pike and has led him to consider his career and priorities.  It’s a simple formula without being simplistic, living the dream but acknowledging the existence of nightmare. There are vivid colours here, affectionate humour and production-design touchstones of old and a pilot-story that ticks necessary boxes… but the glimpse of Pike’s inner turmoil frame the structure rather than seep into every frame.

From the classic Trek touches to a viewing of Michael Rennie and The Day the Earth Stood Still (foreshadowing some of the plot points to follow) this is a series built on unapologetic nostalgia but powered forward and upward by those looking to the future. The older viewers will tune in out of loyalty, but there’s likely enough for younger viewers and more recent converts. If it can keep that delicate but inviting balance intact, this could be the freshest and most welcome Trek for some time… 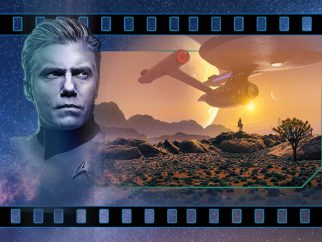 New Who: The 14th incarnation to get an ‘Education’…