There's more TNG touchstones in the finale, but still a lack of logic...

With Jurati/The Borg Queen now out of their reach and unleashed on a wider galaxy, Picard and his friends return to their main mission, to ensure Renée’s space-flight goes off without a hitch. However Dr. Soong is willing to kill Renée to ensure his own, more successful future and time is running out for everyone as the launch gets ready to blast off.

Even if they can thwart Soong’s plans, the person who set them in motion, Q, remains an elusive force… Picard and the omnipotent being are heading for one final meeting where the fate of the time-adrift travellers will be decided and then, far in the future, another decision will be made with billions of lives in the balance…

So who will make it home?

As the credits roll on the finale of Picard‘s second season, one of the main faults of modern-day ‘limited’ series engagements is brought into focus. With the ‘bones’ that could have made a quite excellent film (or a season lasting barely half the running-time) it was all expanded and diluted in such a way that a raft of good ideas was sometimes left adrift – some elements fighting for screentime, some sitting around manufacturing a reason for something to happen. Was this the last ballad of a dying god, a time-travel comedy caper, a redefining of Trek’s most famous adversary, a fable about domestic abuse and mental illness? Each one would be enough to form the centre of a multi-part story, but instead each lost all urgency as ‘big’ themes fought for space and pace and were weakened in the effort. A road of good intentions was ultimately littered with too many nod-wink homages and then far too little coherent, consistent plotting to be as effective as promised.

I have huge respect for all those involved in the show (now and over the years) particularly fellow Yorkshireman Sir Patrick Stewart, but there’s no denying that while that talent is obvious throughout, the construction around them seemed far flimsier than some of the darker subject-matter and the audience deserved.

The finale, like the bulk of the series – and it still gives me no pleasure to say so – is all over the place. After the great start to the second run and several subsequent screen-pleasers, the season continued to look glossy and the cast kept delivering, but the structure quickly devolved from a run to a meandering stagger and into what often felt like scenes penned as lazy fan-fiction: moments to please the party faithful yet even at the slightest glance, contradictory and ill-considered. In a cosmic mea culpa, the finale attempts to join every single dot it can find, but does so by merely including a sequence of hasty tie-off scenes and a wibbly, wobbly, timey, whimey scrawl that feels like a mad rush to complete a jigsaw puzzle where no-one could decide on what the picture should be, a space camel designed by committee.

Several pillars of the season are reduced to salt in the finale, rushed through with little urgency.

Saving Renée Picard and ensuring she takes the destined space-flight, which one would think would be the huge pay-off for the season, leads to a contrived but strangely short and anti-climactic sequence where Orla Brady’s Tallinn disguises herself as Renée (ultimately being killed in her place by Brent Spiner’s boo-hiss Soong – allowing the real deal to blast off successfully). This is in the high-security area where we’re told in one scene that there’s no more quarantine needed (somewhat ridiculous in the last hours before a launch) and in the very next scene Dr Soong is initially told he can’t see Renée because… she’s in quarantine. It also turns out that Tallinn, far from being the little-distance-off presence watching Renee, has had previous encounters with her and was even given the person who gave her the necklace she always carries. This leads to an emotional conversation which seems rather arbitrary and forced and then is ended ahead of any true reaction when we merely cut to Tallinn leaving and don’t even see Renée board the spacecraft. Tallinn later dies in Picard’s arms.  The next scene, Soong is suddenly back in his own home (which seems to be simultaneously near an industrial complex by the beach and in the mountains) having his data destroyed by remote-access Kore but otherwise getting away scott free and thumbing through a folder marked ‘Project Khan’. can I get a moustache-twirling Bwa-ha-ha?

John De Lancie still has real charisma as Q but while originally introduced at the end of the season’s premiere as an angry, strangely weakened version of the previously mischievous omnipotent being who had plagued Jean-Luc and the Enterprise for so long – and one of the main pivots of the marketing – he suddenly became almost background noise, forgotten about for episodes on end. The finale informs us all of his actions were complex but harmless, built on an intent to help Picard uncover buried memories and comes to terms with personal loss – a last gift. Given that there were several moments during the season where Q appears blatantly intent on doing serious damage to the timeline, to the point of killing off Picard’s ancestors – that’s not remotely possible. The argument that it all had to happen because it was the way it was supposed to happen and Q knew all this (and is acting out of benevolence) is silly because Q himself seemed baffled when his early plans go awry. I’m not sure I’m even sold on this sudden and continuity-warping version of Picard’s repressed angst which might make good drama and anchor for this run, but wasn’t any real part of the previous thirty years of the character and thus feels contrived. However, the fraternal chemistry between DeLancie and Stewart is undeniable.

Surprising no-one Jurati is indeed the evolved, centuries older version of the Borg Queen that set everything in motion in Stargazer and her Borg fleet are there to help humanity from strange cosmic energy that could kill billions. This massive storm wasn’t seen or referenced in the premiere, but, yes, there it conveniently is just out of previous shot and Picard orders the fleet to obey the Borg Queen’s commands and give her control. It seems unlikely that even an Admiral would be obeyed by every Star Fleet ship in such an immediate manner, moments after he discontinued a self-destruct sequence, but they do and ‘Borgarti’ saves everyone, declaring that they’d like to be members of the Federation and will stay here to monitor the cosmic event.  Hoorah! Everyone is happy and Jean-Luc can now go home and declare his feelings for not-Tallinn in peace – at least until the final, third season. (I’m barely going to mention that Whoopi Goldberg’s Guinan reveals she remembers her meeting with Picard back in the 24th Century which causes me a migraine even thinking about it…. When exactly does Guinan think she first met Picard now? Pick a timeline, people!)

The only genuine surprise here was seeing Wesley Crusher / The Traveler (Wil Wheaton) making a cameo to whisk off Kore to beyond time and space, recruiting her to be a Watcher. Creating a throughline between the job description of Gary Seven (way back in TOS‘s Assignment: Earth) and the evolved being linked to Wesley (in slightly less way back TNG’s The Way Back) was an interesting bit of connective tissue, but as a singular story element in an already over-packed, over-threaded season, it felt like last minute addition – an element to give the last missing member  of the regular TNG cast a few minutes of screentime and also to do something/anything with Kore’s story which was initially built-up as hugely important and then wandered off aimlessly in search of a conclusion.

Just like the final TNG episode, All Good Things, Season Two has seen Picard skipped through time, encountered a personally-motivated Q and all to stop a hand-wavery cosmic event from destroying everything. This time, All Good Things were more like All Things, but Diluted… which is a shame. It arrived boldly, but went blandly. 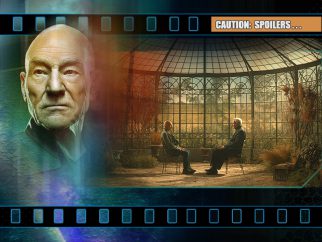 Tombs with a View: Moon Knight gets a fractured finale…

‘Worlds’ Enough and Time: New Old Trek is best of both…