Tombs with a View: Moon Knight gets a fractured finale…

Marvel's latest puts its mummy where its mouth is, but still offers a scattershot sign-off...

Marc and Steven are dead, slain by Harrow, but that’s hardly the end of their story. Will mere death stop them making it back to the land of the living? In the deserts beyond Cairo, Khonshu offers Layla a deal to stop Harrow’s plan, but will the cost be too high if she accepts it?  As Ammit begins to fulfil her desire to judge and claims the souls of the unworthy, various interested forces gather and the fate of individual souls and the entire world hang in the balance…

It’s a busy week for Marvel. On Friday, the much-anticipated Doctor Strange in the Multiverse of Madness finally arrives in the multiplexes and here, just forty-eight hours, prior, Marvel‘s televisual arm of their ‘Phase 4‘ plans  – in the shape of  Moon Knight closed out its run. Originally marketed as a ‘limited series‘ and with a ‘series finale‘ there’s been a subtle change to the marketing in the last week or so with ‘series finale‘ being replaced by ‘season finale‘… an interesting distinction with serious emmy-nominating complexities because it might point to seeing more of the character and the show going forward.

And therein lies part of the dilemma, something Marvel has grappled with since they started their modern run on Disney+: pacing. Even with the most popular characters and projects, success isn’t pre-ordained… and several of the runs so far have been about characters that have yet to reach the heights or footing of their Avengers team-mates.  Building anticipation is one thing, but until  broadcast, there’s no telling how successful an outing will be, especially when viewed as a run and not a singular episode. You can package a production as one story, but how much gets resolved and how much do you want to leave hanging so you can possibly continue? Marvel interconnects its characters and projects – and it seems likely Moon Knight will resurface in some shape or form – but unlike Loki, there was no decision made prior to the series finale. (Oscar Isaac has said there’s no such plans at the moment).

So Moon Knight ultimately tries to have it both ways. You could take this wholesale first run as an ‘origin’ tale but the fact is that it’s less a beginning than being parachuted into an already-in-progress saga in which you’re constantly playing catch-up to work out what’s going on, being aware that some of the pieces are missing… and heading towards an ending that’s very much not an ending –  it’s a ‘…’ or comma and not a period or full-stop. One can argue that the fractured subject-matter dictates the fractured style.  However, the danger with doing anything that openly plays with altered-perceptions is that the finished result can be too vague and ambiguous for its own good, the premise allowing it to willfully paper over very obvious cracks and choose to ignore or explain as intentionally askew anything that fails to fit. Is the whole thing taking place inside a fractured mind? Possibly, but eventually all the hopping between what may or may not be happening, just confuses rather than beguiles, however stylish.

As a result the finale, Gods and Monsters, is… very shiny and fun and a wild ride but also a mess. Yes, a glorious and ambitious mess and an attempt to do something less streamlined and ‘absolute’ as many of Marvel‘s past productions, but still a mad rush to the end with far too many free-floating elements orbiting an unstable centre and ones that would have worked better as moments in a feature rather than entire scenes in a series. It was an entry that, on one hand wanted to check off a whole list of traditional must-sees and on the other wanted to stroke its chin and demonstrate some enigmatic and faux-coy abstract moments. The series may have offered less surprises to those familiar with the various incarnations of the title character and the way he/they have been portrayed in the comics, but it finds itself caught between two tentpoles… too abstract for the casual viewer, too ‘I know where this going‘ for the die-hard fan and ran the danger of not quite satisfying either.

Oscar Isaac has been great in several demanding parts, Ethan Hawke has been enigmatic as Harrow and May Calamawy as Layla has been fiery (on the flipside, finding talent has never been a Marvel problem), but it’s the sheer maelstrom that’s been the selling-point showpiece throughout. It’s ironic, but no accident, that a series called Moon Knight doesn’t actually place that costumed avatar front and centre. The series works best when we care – ie: when we’re with Mark and Steven – and less so when we’re leaping tall buildings in a single lunar bound.  Equally, if we’re flipping between an asylum and a pyramid and if we don’t know if the stakes are real, it’s hard to stay completely invested in them.

The final episode sees Marc/Steven restored and finally taking control of the body they share – this time for their own convenience and not in some servitude role. Like the final act of a movie, the finale goes for a high-profile street battle with Moon Knight and Layla (looking an awful lot like the comics’ Scarlet Scarab’ persona) handling the heroic chores and trying to stop a soul-sucking Armageddon starting in Cairo . But giant Egyptian gods fighting astride pyramids like some blinged-out Kaiju -creations positively demands a big-screen and on the television – despite decent, though not exceptional CGI here – it doesn’t have the necessary scale and depth to pull it off. (The revealed Ammit’s crocodillian features aren’t as scary as intended) .They’re reduced to big, background pyrotechnic puppets as our regular characters engage in the foreground. And more than any other show, the idea of ‘good’ and ‘evil’ remain in flux… none of the Egyptian deities are the kinds of beings you would like or trust, so neither Khonshu nor Ammit are worth rooting for and Marc/Steven become the rogue pieces spoiling their plans rather than outright thwarting them.

In the end, doomsday (well, this one) are avoided and it seems that Steven and Marc have a kind of alliance – though it’s made clear not everything may be as it seems. At the end we’ve been slam-cut back in London, with no sign of Layla and no real explanation on how things have moved on from the main climax. The very last moments (taking place as an extra scene in the credits) introduces us to that elusive third-identity that was quietly secreted away in other parts of the run. As a story sign-off  it’s okay but so scattershot that a majority of the audience will be left, as I was, with a screeching of brakes and a ‘Wait, that’s it?‘ which is different from actively wanting more.

Moon Knight feels like a worthwhile experiment  – a production that managed to show both the possibilities of entertainment and the darkness of genuine trauma (though a different palette from WandaVision‘s mix) – and one with a possible future given everyone involved. But sometimes magic of any ilk and era needs more than the ‘prestige’ brightly-sharpened shards to sell it and any follow-up will need to collect the pieces rather than celebrate the fractures alone. 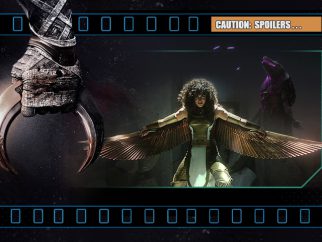