Steven/Marc do some soul-searching through their collective past - because their soul depends on it...

Greeted by the goddess Tawaret, Marc and Steven are told that they are dead and about to begin a voyage on a barge to the afterlife – but their final destination will be calculated by the varying weights on the scale of their life. To do so, it may mean that both Marc and Steven will have to share uncomfortable truths about past events and come to an understanding about which persona created the other and the tragedies that shaped them both.

But while the physical world seems far away, will both Steven and Marc be able to survive the truth that will lead home?

By this point in Moon Knight, even more so than its sometimes boundary-testing and surreal sister show Loki, you’re either fully onboard Marvel‘s latest treaty on cheating death and exploring life… or you’re scratching your head and wondering how many more abstract things can get into a universe better known – until now – for its fully-entertaining but more straightforward superheroics. While not being as surreal as FX‘s Marvel-adjacent-adjacent Legion, the latest episode of Moon Knight certainly is a mind and soul twister, devoid of some of the series’ main story-arc (and supporting characters) of stopping Harrow and Ammit but certainly strengthening the other aspect of the series – exploring the fractured mind of its protagonist. Despite the segue and lack of main-story momentum, it’s definitely not filler… more belated backstory.

VFX-wise, there’s a lot to do this week and it’s all achieved well. Rather than being used mostly for set-pieces, the CGI and backdrops give the quieter and more emotionally-devastating elements added texture.  Continuing the deep-dive into Egyptian mythology there’s Taweret (the Egyptian god of fertility and childbirth), a wonderfully-realised, vibrant and joyous hippo (voiced and performance-captured by Antonia Salib) who acts a guide to the journey into the afterlife; the great ‘barge of the dead’ (sailing on a sea made up of sand and lost souls) has real attention to detail and even the transitions between ‘past’, ‘present’, therapy sessions and the barge slide into each other convincingly (so much so that you occasionally lose track of which ‘Marc/Steven’ you’re watching, which is probably the intent).

But physical effects and Mohamed Diab’s directing choices also work. Amid the chaos there’s a quieter moment when Marc has to walk through a ward of silent almost zombified figures representing the people he’s killed, acknowledging that the sometimes-flippant mercenary never forgets those who have died at his hands. The result is genuinely unnerving, perhaps more than The Walking Dead where the corpses are less judgmental…

The current state of superheroics (on and off-screen) is to anchor your character with emotional torment and unresolved issues. Not unlike the current series of Picard, Moon Knight‘s ankh-sized anchor turns out to be the literal mother-lode. It seems – in a subtle change from the source material – that Steven/Marc’s emotional trauma comes from the fact that Marc lost his younger brother in a drowning accident and that his mother never forgave him, subjecting him to mental and possibly physical abuse from which his father couldn’t help. Marc created a more rational, unassuming personality that protected him from moments of that abuse. But it can work both ways and later shifts see Marc protecting Steven from the truth and so, in essence, while Marc came first, each ‘personality’ assumes a protective role, as real as the other.

Until now the series has pivoted between Steven’s often being the ‘weak’ one and Marc’s being the ‘strong’ and ‘overt’ one, but here, especially, Oscar Isaac gives the more studious personality a sense of purpose and depth and the mercenary a sense of cost. By the time the episode runs its course, we’re so invested in each personality that the apparent loss of one personality feels just that: significant loss. As a deep study into multiple personalities there’s likely plenty with which those within the medical community could find fault. This is – after all – not meant to be a documentary. But as multi-layered fiction it’s an effective, emotional rollercoaster that is simultaneously dramatic and sympathetic to its core characters. Isaac is consistently asked to carry a lot of the series’ weight and continues to be impressive, imbuing each of the fractures with a real sense of valid existence – giving them both a darkness and a sense of gallows humour.

It’s interesting – and telling – that we’ve actually seen comparatively little of the title character throughout the run – brought out for a couple of action sequences, but with the main emphasis on the face and persona behind the cowl. By the time next week’s finale is done we’re likely to have a more consolidated Moon Knight character (though, one suspects, not entirely –  some of the joy is that fractured element and there’s still indications from earlier in the series that a third personality might be lurking around). Basically, that last episode has a lot riding on it…. the final flourish on a series impossible to pigeon-hole or just another level of weird. 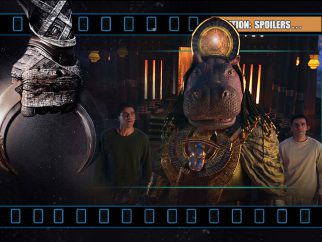 The Motherlode: Penultimate Picard looks back not forward…