The Motherlode: Penultimate Picard looks back not forward…

Picard and his crew race to stop the Borg Queen/Jurati getting control of the La Sirena, but with Dr. Soong and his mercenaries stand between the chateau and the ship. As shots ring out and allies are hit by enemy fire, Picard journeys through the secret tunnels beneath the chateau with final revelations about his childhood beginning to surface. Will those long-lost truths help them survive, or will all hope be lost as final challenges are made for the shape of the galaxy to come..?

However strong its cast and crew, Picard‘s Achilles heel continues to be its askew pacing and lack of internal logic – essentially characters highly active or vanished off-screen at key moments and then doing something that makes little sense, all to fill an episode remit. Each episode happens at the expense of another becalmed storyline’s previous urgency. It’s become clear that the ten-episode structure of the run belies a story that would have worked far better in half the time… and so the twists and turns that extended it cripple the momentum, even in a busy entry.

Hide and Seek plays with the idea of mother-figures and attempts to bring many of the central players together in a high-stakes confrontation, but by the time the smoke clears, there’s no clear victory in place, just moving parts shifting slightly.

The slow-paced ‘chase’ through the catacombs under the chateau works mostly as a device for Picard exploring repressed memories, realising that far from having an ideal relationship with his mother, his childhood was tragic. Not only did Yvette Picard (Madeline Wise) suffer from bouts of severe depression, but she hanged herself after Jean-Luc used the chateau’s skeleton key to release her from her room (where Maurice had locked her in for her own safety). Young Picard was the one who found her and then instantly erased it from his mind. (A nice directing touch from Michael Weaver runs Picard’s actions in reverse). Picard makes reference to the fact that he pictured better/false ‘memories’ of her when she would have been older (thus explaining/retrofitting a moment in The Next Generation when he does just that). Again, Jean-Luc’s brother Robert (from the important ‘Family‘ episode of the show and referenced in the movies) has been erased from continuity.  This week’s episode of Moon Knight dealt with not dissimilar territory with far more flair. But just as importantly, the whole ‘memory’ aspect smothers the very reason for Picard and Tallinn being in the tunnels to begin with. As a matter of great urgency, they’re racing to the other side of the chateau grounds to prevent Agnes/Borg Queen from seizing control of the ship and altering galactic history and avoiding the gunfire above. Yet the couple dawdle and meander, frequently stopping for a flashback, being very lucky with the inept mercenaries they do encounter and then head back above ground before they leave the main chateau footprint… all to walk straight into the arms of Soong and his gang.

Spiner’s scientist, at first somewhat sympathetic, conflicted and nuanced has now become nothing but a horribly tropey/clichéd bad guy who has done everything but twirl his moustache. The keystone desire to protect his daughter has evaporated and even the revelation that she’s an experiment and he cares more for the result than her as a living, breathing being is eclipsed by the way he’s forgotten about the urgency of finding her, just so he can sneer and pout at our heroes. It’s such a shame as Spiner really played those earlier beats with aplomb.

After bringing on them onboard for no good reason, an injured Rios (Santiago Cabrera) needs to get Sol Rodriguez’ Dr. Teresa Ramirez and her son out of the line of fire –  with Picard sending them off via Tallinn’s transporter – which allows the episode to sideline him from much of the action until he can reappear to save Picard and the day at the last moment. It’s being set-up that Rios is likely to stay in the past with Teresa, though what that would do the timeline is anyone’s guess. If it’s a way to write Rios out, that’s a shame, as he’s one of the most charismatic new character the show has introduced.

The ‘return’ of Evan Evagora’s Elnor is utterly bizarre. No, it’s not the original Elnor but an interactive, hard-light ’emergency combat hologram’ recreation a la the variations we saw of Rios in the first season. If that was it – fine. But for some technobabble reason that defies real explanation or logic, this Elnor, though aware he’s a simulacrum, says he has all the memories of the original right up to the moment of death. That’s – frankly – not only impossible but stupidly lazy writing added into the script merely to create a poignant moment with Raffi. On the flipside, even if we’re going to suspend disbelief and accept it, this recreation should, by definition, be able to blink in and out around the ship and use holographic tactics to tackle the insurgent mercenaries (who, for all their drum-roll introduction as a threat at the end of last week’s episode are little more than unnamed collateral damage this week, some transported for a distinctly PG-13 version of a gruesome death halfway into foundations). Instead, we see Elnor hiding from them (why?)and then being surprised by what he finds in the armoury (again, huh?) before selecting his trademark katana to inflict serious injuries. Don’t get me wrong, it’s good to see Evagora back and showing off those much-missed close-quarter combat skills, but the ‘return’ feels like someone panicked and thrust him into the story for contractual reasons and then wrote a couple of lines of dialogue and stage directions a to cover themselves,  without understanding anything more than cliff-notes about how things work.

Alison Pill has been something of a revelation this season and manages to almost sell her side of the morality speech that she gives to the Borg Queen. It’s not that you want to assimilate everything, it’s that you need to not be alone, she preaches in her external/internal dialogue. After a rather understandable colloquial ‘bullshit‘ reply (because while Pill is good, the dialogue itself is streamlined, cod-psychology at best, it seems the Queen comes around to making the Borg a unifying force for good rather than assimilation. Wow, if only Picard or Janeway had thought of that. Before taking off in the La Sirena for parts/times unknown, Pill’s version saves the life of Seven – only fair as she’s the person who just gutted her – but conveniently gives Seven back her cybernetic implants. No gift goes unpunished. (It doesn’t take rocket science to work out that, somehow, the Agnes/Borg hybrid will become the Borg Queen Mark II we saw in the opener…)

Penultimate episodes should have us on the edge of our seats, aching for the final chapter that is still a week away. Instead, we finish on the crew simply standing around like they’re lookign for a spot for a picnic amongst the vineyard, not addressing that they’ve lost their only way home and yet suddenly remembering the main plot of the season is to keep Renee’s history on track (I’m not sure Q is even mentioned until the final scene) which demonstrates the real problem of the show flipping between its main story-arcs by ignoring each’s stated urgency.

There’s one episode left and after a great start, there’s a horrible feeling the season will suddenly attempt to cram far too much into a season that already ran far too long… 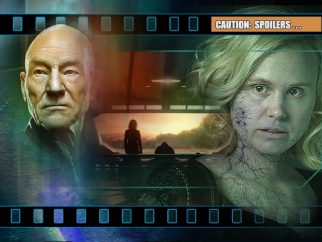