There's an enormous amount to love in this latest chapter, but, once again, very little of the series' main characters...

As Din Djarin seeks out the Jedi, wanting to give his previous ‘cargo’ a gift, he finds that the young Grogu’s path may not include a reunion. The short green padawan is learning to use his powers but will face a decision of his own.

And on Tatooine, forces are being aligned. Boba Fett is assembling a ragtag group to fight the Pykes, but even with the Mandalorian, it seems that those opposed to their postion are more than prepared to enlist their own gunfighters… and perhaps draw first blood.

From the Desert Comes a Stranger is perhaps the finest piece of televisual Star Wars ever produced – rewarding the party-faithful and showcasing the talent that has come together to make the magic work.  It is full of ‘Did they just…?‘ and ‘Oh, that’s…‘ moments that resonate and stand up to a second-viewing, full of drama, humour and quality fan-service. As a pilot it would have been showered with unconditional praise and even now acts as a further showreel statement of a Lucasfilm fully intent to fully explore that galaxy far, far away. However, as a single late-in-the-day entry in The Book of Boba Fett it’s also somewhat damning – because of the very distance it puts between itself and the rest of the run. The single tome of the title feels less and less like a book and more of an over-ambitious footnote. It’s as if Tom Stoppard’s Rosencrantz and Guildenstern looked around halfway through their own play, shrugged and decided to ride a Rancor back to Hamlet.

If a kitchen sink had entered stage-right during this week’s episode it couldn’t have felt any more packed. There’s elements from all across the Star Wars universe – old and extended – and one might argue there’s almost too many, though each feel individually worthy. The banquet of extras and goodies can be praised, but it also has to be evaluated over what’s missing. With only seven episodes of The Book of Boba Fett in the run, four were oddly-paced entries consisting of easter-egg’d flashbacks where too many significant things happened at a snail’s pace or off-screen and then bookended by contemporary power-struggles in which, despite some gunfights and beautiful vistas, not enough happened to justify the screentime. Temeura Morrison is an imposing presence but Fett himself has seemed like a new man in old armour, if not neutered from his old ruthless ways, then somewhat defanged as the series tried to turn him from villain to anti-hero. Yes, he wants to be the gangland overlord, but he resists killing unless he has to and wants people to respect rather than fear him. A potentially ‘R-rated endeavour given a pretty but PG execution. The further decision to then sideline the series story-arc and devote almost the entirety of two episodes of the short run to continuing the saga of a different show (The Mandalorian) speaks to something shifting behind-the-scenes and altered very late in the game.  Bluntly, if The Book of Boba Fett fails to showcase its leading stars (Morrison getting one almost silent scene this week after last week’s absence and Ming-Na Wen as Fennec Shand doing only slightly better) then there’s an innate problem in the blueprint. Whether that’s because of production hiccups, a creative lack of faith in the Fett aspects keeping audiences hooked throughout or just a sudden surge in the desire for connective tissue to tease the next Star Wars shows… is debatable at this point. However it’s annoying because any one of the options could have worked for the show – various stand-out scenes proving that point – but the vacillating between them runs the risk of diminishing them all.

But let’s look at the applaudable highlights: I wondered last week as to where the Mando/Din Djarin reunion with Grogu/Baby Yoda would take place as it seemed too important an arc-beat to casually hand-off to the Boba Fett spin-off. Apparently not, as the story dominates this entry, though it ends up with the two not actually engaging due to the will of the Jedis (and with an ending that invokes the same question as to whether an important decision will be made in next week’s finale or postponed until The Mandalorian officially returns).  The surprise appearance of an in-his-prime Luke Skywalker, courtesy of quite stunning motion-capture CGI and Mark Hammil’s voice back in the season finale of The Mandalorian rightly resulted in a frenzy on the interwebs. It might have been a prestige decoration to proceedings, but it was also a huge season-ending pay-off for loyal fans and such connective tissue has rarely been as effective. This week’s Boba Fett chapter decides to double-down on all that, giving us not one mere moment but a handful of lengthy scenes with a fully-functioning Luke. The Skywalker CGI/motion-capture isn’t quite pixel-perfect throughout – some of the uncanny valley seams can occasionally be glimpsed through the charade, but – ironically – the result works best when up-close and with a static, stoic figure. It would be churlish to criticise the over-all result, a massive success in the most important ways and quite the benchmark to which current television should aspire. We’ve come a long way since the well-intentioned Princess Leia and Moff Tarkin tributes of Rogue One.

Like a sweeps-episode on steroids, Luke is but one of the major surprises.   R2D2 beeps his way as Mando’s guide, Rosario Dawson reprises the character of Aksoka (soon to have her own series) and we see the building blocks of the training enclave in which we will find an older, weathered and far more cynical Luke in Revenge of the Sith. There’s the return of Timothy Olyphant’s Marshal Cobb Vanth in a sequence that unapologetically channels Segio Leone westerns and – for fans of the extended universe of The Clone Wars – yes, that’s the isn’t-he-a-bit-late-to-the-party, blue-skinned, big eyed sharpshooter Cad Bane heading into frame, complete with a wide-brimmed hat, a sinister snarl and a serious attitude.

A visual treat, a mythological gift and much to discuss around the cantina water-cooler, From the Desert Comes a Stranger is a multi-layered chapter that will keep fans occupied until next week’s finale. What that sign-off will look like is still unclear. If it once again divides its time, even more equally, between the Mandalorian and Boba Fett arcs, then it may well signal this is a one-series-and-out for the original bounty hunter, though one suspects whatever the outcome, characters’ return are possible – because nothing is ever really laid to rest in the galaxy far, far away. 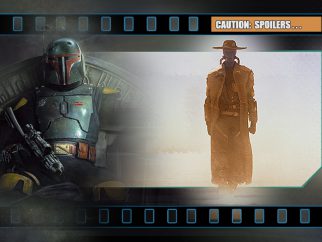 The Last to Go: Snowpiercer changes the rules of engagement…