Two girls – two very different worlds. For Mischa, an awkward outlier, it’s the strain of moving from city to city and wondering why her mother never quite answers the question about the reasons for their nomadic existence. For Jessa, everyday life is rather different – it’s being the most popular girl, learning about magic, whipping up potions and spells and enjoying the weird and wonderful world of a school hidden away from the fully human world.

But for the two girls, until now unaware of the other, life is about to get very complicated. Someone, or something, has made an attempt on Mischa’s life and now her mother must reveal some long-hidden truths.  Mischa and Jessa may be polar opposites, but they are also sisters, separated at birth.

Will reuniting them help them learn from each or will it just mean that the dangers and forces moving against them now have far easier targets?

It’s a little hard to review the new Peacock show Supernatural Academy as it’s clearly a series for which I am – as a male of age 50+ – nowhere near the target audience… but that doesn’t mean that such an audience doesn’t exist – far from it. Supernatural Academy, then, feels like a live-action CW show given the CGI treatment: a touch of magic, a touch of teenage angst, some moral quandaries to address and with a selection of modern obstacles to overcome on a social and save-the-world basis.

It’s easy to feel that a potential audience for animated fare consistently wants boundary-pushing material – CGI that’s almost photo-realistic, beautiful-painted animation backdrops and young adult material with an edgy narrative or so-star packed that it’s impossible to overlook. The truth is that while it’s dangerous to underestimate younger audiences whose demands may move in time with (and often drive) the evolution of the industry, it’s also a fact that there’s a solid market of more ‘fun’ material that simply wants to find a niche and to entertain if not the headlines and column-inches. And it does so with aplomb.

There’s a mixture of factors at work that form the foundation of the concept – ones that don’t always work seamlessly in transition. Many series try to ‘mature’ up their idea for the screen, but here it’s quite the opposite. The source material is a range of popular ‘sexy urban fantasy books‘ penned for ages 17+ by Jaymin Eve with covers and contents reflecting that vibe… unapologetically occupying the visual and fraught literary ground between Harry Potter and Twilight.  The resulting show has a far different mission statement and target audience: it isn’t trying to get your blood-racing and it immediately foregoes the sexy for the sassy, the steamy for the dreamy and the haste for the chaste. The animation and the new character designs themselves also feel geared several school grades younger – deliberately reminiscent of CGI efforts and computer game animation from a decade ago and it could be that someone seeing the marketing will believe it skews much younger than the result actually delivers.

The truth is, Supernatural Academy the series is somewhere in the middle, a deliberate attempt for relatively new platform Peacock to show it’s embracing all-ages. Rather than adapting the books, it looks to be inspired by their general idea and starts telling its own tales. The animation may be old-school, but this isn’t quite Saturday-morning fare. In the more-knowing mix there’s some Buffy – to which all modern shows must bow and acknowledge the enduring legacy – and a feel of Sabrina the Teenage Witch (before it got more hot and heavy on Netflix). Mischa appears to be from a single-parent family, weathering the reality of having to keep moving and losing her hard-worn friendships at too-regular intervals, able to handle the obstacles and debris in her path but tired of doing so and confused about the reasons. modern parallels to culture-clashes, immigration and just the perils of navigating your teenage years are all there in some shape or form. There’s mild bad-language, such as someone describing a fellow student as a bitch and an asshole (but if you’re offended by that you may want to stay away from television in general) and casual discussion of same-sex attraction that’s topical rather than tactical (ditto) but nothing so controversial that you wouldn’t hear or see discussed in the lunch-room each day at any Middle or High School.

There are some familiar and talented names bringing their expertise to the show. Head Writer Gillian Horvath (Highlander, Beauty & the Beast, Primeval: New World, Sanctuary) has helped shepherd the concept from the page to the screen and pens the opening episode with some nice dialogue and banter amid the necessary set-ups. There’s also the likes of Kerry Glover (Stargate SG1, Leverage) and Kaaren Lee Brown (Tarzan and Jane, Liberty’s Kids, Super Monsters) onboard, so it’s in safe hands.

Supernatural Academy may need a bit better promotion, but if it can get the attention and align its marketing then it has the potential to be a world-saving curriculum and a separate entity from its source material and stable-mates. 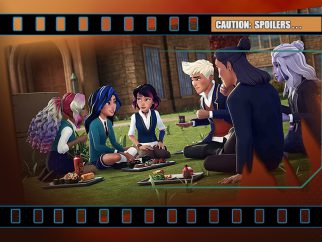