An undeniable love letter to the classic film, but one that can't quite decide whether it's reboot or tribute...

Callie and her two kids, Phoebe and Trevor, are about to be evicted from their Chicago apartment – after all, bills won’t pay themselves. Albeit reluctantly Carrie ships the family out to Summerville, Oklahoma where her estranged father has just passed away, only leaving them a run-down home. But excluding bills and debt,  is there something else within its walls? As the kids explore the house, the surrounding area and the twists and turns of a new rural life, they also find that the area – regularly rocked by impossible seismic activity – has some secrets that have remain buried for decades and centuries.

Phoebe also begins to discover some of the specific legacy her grandfather left behind. There’s several of his old uniforms, promotional videos from his old job in New York in the 1980s and pieces of equipment that seems to have been reactivated. There’s also what seems to be the ravings of a crazy man predicting the end of the world (in such a way that even his old team-mates didn’t believe him and the townsfolk  kept their distance).

But now there seems to be some undeniable truths surrounding escalating events. Can the kids’ new friend ‘Podcast’ and Summer School teacher Mr. Grooberson offer any advice… and if not, just who is Phoebe Spengler gonna call?

Ghostbusters is one of those almost sacred franchise titles. The first film, released in 1984, was a cultural phenomena, one that bears repeated viewing and still holds its spectral energy decades later. Attempts have been made to further capture that lightning-like mixture in a bottle to lesser varying degrees. The 1989 sequel was by-the-numbers but nowhere near as beloved and the 2016 reboot, directed by Paul Feig and recasting the main characters with female actors, was well-intentioned in and of itself, but received a decidedly mixed reception after very clumsy marketing.

So the announcement of Ghostbusters: Afterlife, centering on a much younger cast was met with some trepidation. On one hand, projects like Stranger Things had successfully channeled a similar sense of subversive fun, but there was something iconic about the original ‘busting team that was unique, of the moment irreplaceable and many thought the latest production could simply be opportunistic rather than well-considered.

The good news is that Ghostbusters: Afterlife is essentially a love-letter to the original, with director Jason Reitman honouring the work of his father who directed the first two films. With every pun intended, essential elements of that elusive spirit are recaptured and blended with a vibrant, modern tone. It pivots towards a younger demographic but has its heart set on nostalgic restoration rather than resurrection.  Ultimately, that does have its pros and cons. While having something for everyone, it’s true that Afterlife isn’t perfectly balanced.   The first half of the film is character-driven fun with Easter-egg moments and very much the sense of an old Spielberg vibe as young people run around knowing more than the adults. The second half pivots into far more overtly-reverential territory, some supporting players get forgotten and it slightly overplays its emotional hand. It sets up blatant parallels and moments with the original and rapidly becomes a homage-driven nostalgia-fest rather than its own unique entity.

McKenna Grace (The Haunting of Hill House) is excellent as Phoebe, Spengler’s grand-daughter, playing the role with obvious nods to Harold Ramis but without every falling into caricature. Her awkward demeanour walks the line well and you’ll find yourself laughing along with her equally awkward jokes. Paul Rudd, better used in the first half of the film, is fun as the wayward summer-school teacher who, exasperated by the kids lack of interest simply lets them watch Stephen King classics. “Cujo…. just think of it as Beethoven with Rabies” is a great one-liner though, one suspects, it’s inclusion is more of a nod by the film’s creators to the top-end of the audience and would utterly go over the head of the kids who wouldn’t have even been a twinkle in the eye when either film was merely a concept. Carrie Coon – a consistently excellent but sometimes under-rated actor – is Spengler’s estranged daughter Callie, in equal parts sad and angry that he seemingly abandoned her yet a woman that’s managed to handle heading a single-parent family with  wear , pragmatic sass. Finn Wolfhard, he of Stranger Things, plays Callie’s son (and Phoebe’s sibling) Trevor and is given more to do than replicate the beats of his Stranger Things role, but he’s definitely a supporting player here and his struggles to fit into his new surroundings, initially one of the film’s main plots, back-pedals a bit when Grace’s Phoebe assumes centre-stage.  Newcomer Logan Kim plays his Podcast as an enthusiastic ‘believer’ in what could be a breakthrough performance, though the fact that’s the moniker the film gives him feels a bit ‘Short Round’ in execution.

The inclusion of the most of the original stars, hardly a secret, is handled well. In most cases it’s a sense of far more than cameos but perhaps less than major players – with them mostly involved in one major scene at the climax, recreating their roles and passing the torch. When they finally arrive, Bill Murray and Dan Ackroyd slip easily back in to their beloved characters, hitting all their beats and audio-cues. But it’s perhaps Ernie Hudson as Winston and the appearance of Ramis that should be particularly noted. Hudson never got his real dues from Ghostbusters, his character side-lined in the film’s marketing despite his importance and that’s rectified in an after-credits scene that fully underlines Winston’s ongoing and subtle financial contribution to his friends (though, one wonders why that didn’t extend to Spengler’s family) and perhaps involvement in any future installments, should they happen (there’s also a nod to a deleted scene from the original between Annie Potts and Ramis’ Spengler). But, of course, despite his passing in 2014 this is Ramis’ film in spirit and rightfully dedicated to him at its end. His presence is felt in every frame and there’s even an innate tingling to the senses when echoes of Spengler are merely shown as the moving of objects within the home. When, at the climax, we see ‘him’, recreated in almost ‘Force-like’ form, it’s quite lovely. The pair of hands helping Phoebe save the day is a moment of  true movie magic and the silent, spectral Spengler standing alongside his estranged team-mates works on a number of heartfelt levels. Yes, it’s perhaps over-played in quantity – the ‘loving goodbye’ would have worked better with a ‘less is more‘ decision – but the film has earned the moments it takes.

As a fan of the original film (and one who didn’t actually mind the 2019 reboot), there’s much to enjoy here and while there may be some fair quibbles and caveats along the way it would take Grinch-like levels of critique to deny its wider charm. (It is true that the more you think about it, there’s very little busting of ghosts at all. All the real menaces are monsters and demons and the most important ghost in proceedings doesn’t need busting at all, far from it!) But there’s a moment – and you’ll know it instantly when it comes around – when every single person over the age of thirty in the audience will yell “Say YES, say YES!” and at that moment the film is channeling pure nostalgia. Perhaps that’s worth the price of admission alone.

No, it won’t come close to the timeless status of its source material – perhaps because it embraces and emulates that legacy rather than trying to create something that stands on its own merits (though it could well have done so) – but its a film that serves as a considered, loving book-end (albeit open-ended) to a much-loved classic and works well on a variety of important levels, mostly suitable for all ages and has a sense of adventure and hope missing from far too many recent releases. 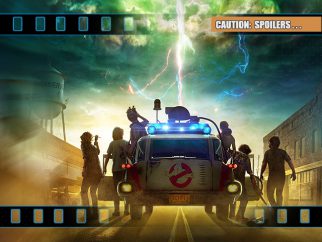