A visual treat - for those actually ABLE to watch it - but is 'Discovery' really boldly going anywhere new?

Michael Burnham has been made Captain of the Discovery and its ongoing mission to reach out to worlds and civilisations that were lost to the Federation after the Burn. Some of these ‘second-contacts’ go better than others, but a mixture of drama and diplomacy makes the latest mission work.

But after meeting with the Federation’s new President, a distress call takes the Discovery and its crew to a Deep Space Repair base that has been hit by an unknown cataclysmic event, leaving survivors trapped and rapidly running out of air and time. The Discovery can send some of its crew aboard to help, but can they get the survivors off in time with conditions in the area still far from stable? With President Rillak monitoring her decisions, can Burnham once again beat the odds or will sacrifices have to be made?

Though demonstrably at different ends of the budget-spectrum, there’s some comparison to be made about the current returns of both Doctor Who and Star Trek: Discovery. Both are legacy sf shows, both give us characters fighting some sort of destructive cosmic storms endangering the universe and both shows are facing off-screens trials and tribulations from a divided fanbase.

Several days after a London event to promote Star Trek: Discovery and mere hours before what fans expected to be the launch of the show’s fourth season, Paramount + announced that the show would not be appearing on Netflix and no-one outside the US/Canada would be seeing the new episodes until January. Actors such as Doug Jones confirmed that they found  out the news at the same time as fans and understood their dismay. It may have been driven by pragmatic fiscal corporate decisions, but it was, without doubt, a PR mis-step of quite cosmic proportions, one which could badly hit the appeal of a subscription-reliant platform and the innate support for a show that has had something of a marmite quality through it run to date. At the very least, the decision created a perfect storm for inevitable illegal downloading beyond the US, which will likely affect its viewing numbers when it is legitimately available.

But let’s try to move beyond the pragmatic into the creative.

Season Three (with the Discovery propelled from a pre-Original Series time-frame to an even further far, far future)  introduced the idea that a cosmic disaster had stopped long-distance cosmic travel, the destabilising of Dilithium crippling the Federation and much of the season resolved around the Discovery tracking down the origin and reason for ‘The Burn’. That the cause turned out to be an accident, the empathic burst of an  adolescent Kelpian who had been trapped in a virtual reality ‘nursery’ was a revelation that received a very mixed reaction from fans, but a fourth run of the show was guaranteed and with Burnham promoted to Captain, fans felt that the fourth run might iron out some of the creases and concerns.

With the release of the latest episode – Kobayashi Maru – it’s not easy to tell if that’s happening or not. As always there’s talking and walking and nods towards consequences, but much of the existing framework and blueprint seems intact, albeit with some new colour schemes. What’s a little strange is that despite the promotion synopsis reading “The crew seeks to understand a threat unlike any other…” the opening episode appears to set up a not-dissimilar situation to last year’s arc – with some strange massive force causing havoc across the galaxy and the Discovery at the forefront of saving the universe from it.

It’s impossible not to acknowledge that there’s a lot of new tech upfront, especially the kind that connects and disconnects at will. TOS has to make do with polystyrene rocks but this fourth season clearly makes expansive use of the latest CGI and shooting techniques available. The vast forests full of butterflies and aliens in the opening sequence, the underwater scenes on Kaminar and the now taken-for-granted cosmic vistas populated with starbases and starships are all seamless and believable, a nice mesh of tech and production design and a show-reel for what’s available to the show. But there are also some old-school tricks at work. Beaming aboard a damaged base and with artificial gravity failing, we see people walking on the ‘ceiling’. It’s as simple as inverting the camera and designing the action accordingly, but it throws off the senses in an effective, organic way. Beyond the episode title there’s a raft of nods to the legacy. A starbase is named after Archer (Scott Bakula’s Captain in Enterprise), there’s a reference to problems with Heisenberg Compensator, we see what looks like a Tribble and there’s talk with the 32nd Century Voyager becoming a prototype for new technology.

Michael Burnham may be at the show’s heart – and the sole face of this season’s marketing imagery, apparently – but she has been one of the real problems for me. The show seems beholden to making her the centre of its universe and yet the character herself has rarely earned the honour bestowed on her by the script and plot. I’ve nothing against  Sonequa Martin-Green herself, who has met each challenge presented, but in four years Burnham’s gone from a logic-driven half-sister to Spock whose single-mindedness ignited a galactic war for which she could still be serving time, to a character of illogical cosmic recklessness whose main characteristics seem to get moisty-eyed each week as she defies impossible odds and yet still remains the favourite child.  She’s brave, but more so, she’s just been reckless and incredibly lucky. The most interesting scene in this opener is a conversation with incoming Federation President Rillak (Chelah Horsdal) as things take a dramatic turn. Burnham boasts about the amount of times they’ve ‘beaten the odds’ and Rillak replies “So you’re immune to failure?’ and later “Your acts of bravery are irrefutable…they are also huge swings of the pendulum and in a time of rebuilding there is a very fine line between a pendulum and a wrecking ball…” Burnham undeniably looks good in the red suit (the costume department getting inexplicably revamped between the final scenes of last season and the first of the latest run) but, frankly, Rillak is right – earning the captain’s chair means by its nature making hard, pragmatic choices, understanding that there will be days of tragic loss mitigated only by the fact that things could have been worse. It’s the very nature and premise presented by the title of the episode Kobyahashi Maru, referencing the unwinnable scenario that was the infamous part of Star Fleet training. Captain Kirk hacked the system to win by cheating, Captain Burnham simply pretends it doesn’t exist. That continued lack of self-awareness makes her unsuited to the rank and a surely a ticking time-bomb likely to take-out others. One can only hope that acknowledging that uncomfortable truth and its inevitable consequences informs the season rather than being lip-service to an ongoing excuse, but we’ve been here before without much change. Real consequences, if they come, will bring sorrow, the lack of them will being boredom. One is drama, the other a death-knell for drama.

But Burnham, as always, gets the lion’s share of the story with Doug Jones’ Saru getting much of the prominent B story readying his inevitable return to duty and there’s a set-up for David Ajala’s Booker as his world is affected by loss. There’s some nice character moments for the likes of Tilly (Mary Wiseman) and Stamets (Anthony Rapp), but over three years in and you’d be hard-pushed to easily name-check most of the other bridge-crew and their character quirks. Even TOS serviced their regular supporting cast more interestingly and that’s something that the show will also need to do better if it’s truly embracing the ensemble aspects of the franchise rather than using them as filler.

There’s set-up here that could go a number of ways, but little that will likely change your existing opinion of the show in the short-term. What it does well continues to be done well and with flair and it remains watchable – it’s a fun enough fifty-two minutes. What it fails to do is still problematic and frustrating and likely won’t bring new numbers aboard the viewing figures… but it’s hard to tell from a season opener what the new voyage will be and whether it will learn on its curve and go boldly rather than basically. It’s worth sticking around to find out… for the moment.

Burnham’s command is to ‘fly’. In the weeks to come it needs to soar and, despite the pretty pixels, the opener merely glides. 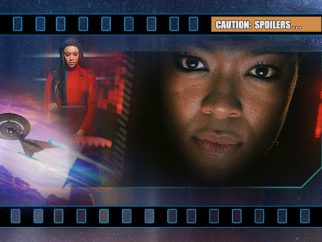