Undesignated survivors cause a problem of gender and agendas in the latest addition to tv's latest post-apocalypse viral load...

For some inexplicable reason, every creature on the face of the planet  that possesses a Y chromosome dies. Males of every species collapse in agonising death and within days, it’s the surviving women who must pick up the pieces. A society and infrastructure from which they were either ignored or taken-for-granted now needs those skills to start finding out what happened, why it happened and what comes next. From the streets to the corridors of global government, there’s chaos, bringing out the best in some and the worst in others.

Congresswoman Jennifer Brown finds herself thrust into the Presidential job until recently filled by her political rival and faces the task of trying to find her way through the minefield of pragmatic survival needs and the power-play turbulence in the broken government’s own home.

In New York, Yorick Brown has just proposed to his girlfriend who didn’t take the proposal as well as he’d hoped and sister Hero Brown has her own emotional problems when she finds out that her ambulance-driving colleague and lover has no intentions of leaving his wife.  Then the virus hits and changes everything.

For some reason, both Yorick and his pet monkey Ampersand remain untouched by the virus and now the bewildered, often aimless young man’s world is changed forever as he becomes the pawn in a seismic shift for the planet, a secret, a survivor, an enigma and an asset.  And there’s one person, an undercover agent with the designation ‘355’,  charged with making sure he stays alive… but can he even trust her?

Nowadays you can barely move without stumbling over the twitching corpse of an apocalyptic primetime concept as it goes viral.  There’s The Walking Dead and its spin-offs, the recent adaptation of The Stand, What If’s zombies, Zack Snyder’s Army of the Dead to name but a few.  Of course, that’s discounting the real-world news that keeps adding to the list of COVID variants and  lockdowns and makes the fictional outings either tiring or interesting, depending on your tolerance for widespread microbe-level mayhem. But the latest take is all about a world in which all men – bar one – suddenly die. If that’s not disturbing in and of itself, it’s equally unnerving to find out that there’s already an official dictionary term for that: androcide.

The specific story about a hapless guy and his monkey navigating  a man-less world has been around for a while. Y, The Last Man is based on the award-winning comic of the same name, created by  Brian K. Vaughan and Pia Guerra and published by Vertigo / DC Comics from 2002 through 2008. The adaptation has had a long road to the screen – considered for a movie treatment over a decade ago and then pivoting to a series format first envisaged in 2015 before essentially being reworked again after ‘creative differences’ early in production led to changes behind the scenes and actor Barry Keoghan (The Killing of a Sacred Deer) exiting the role of Yorick. It finally arrived on FX for Hulu this week with Ben Schnetzer in the central role, but a solid cast around him.

The ‘Y’ of the title has several factors. Most obviously it’s the initial of our ‘hero’ Yorick, but also the Y chromosome – ie: the chromosome usually only found in males – that is almost wiped from the planet. We also want to know why he’s the last man.

Those who know the original source material will likely be quite happy in the general transition and though there are inevitable changes and societal updates, the core concept and tone remain. Newcomers will eye it carefully and likely find themselves giving it a chance. Y: The Last Man is, then, TWD without the zombies, The West Wing without the zingers and Designated Survivor without Kiefer Sutherland – but a solid and sometimes thought-provoking mix that contains the one prime secret of all good drama: putting recognisable people in unrecognisable situations and watching how they cope. Your mileage may vary on the outcome, but it feels like a worthy entry in an already crowded market-place, at least so far. The first three episodes are a watchable if not always nerve-pounding bunch. They are, together, the set-up for what comes next, with the pilot being an ignition point for the concept, showing the hours leading up to the apocalyptic halving of the Earth’s population. Wisely, the actual opening sequence takes place afterwards and then flashes back, thus hooking in the audience with an immediate visual and a question to keep them invested. Apart from eye-bleeding, sore-weeping death slowly working its way up the food-chain, the pilot is mostly a character-piece, highlighting various characters that barely looked connected to begin with, but by hour’s establishing a venn diagram of relationships that will become important.

Schnetzer’s Yorick is of an aimless guy who might have had all the privilege he could want (or not) but instead was muddling through life on his own terms, scraping the rent money when he can and still living on the likely hopeless dream of becoming a professional magician and hanging on to his far more worldly girlfriend.  Despite Yorick being the ‘main’ character of the title, Schnetzer’s performance – fine though it is – gives us a character that’s not always likeable and – ironically and wisely in equal measure – it’s often the women of the piece that hold the attention as they begin to flex their muscles in a world that often held them back.  His sister, Hero, is arguably in just as much of a personal mess but making more efforts to get out of that spiral yet somehow ending up in an even worse position. Yes, the naming of the characters is a little on the nose and the explanation of their father being a huge Shakespeare fan seems an excuse to have unusual monikers (but this goes back to the comics, so one can’t hold it against the show). I’m not sure there are many people who would saddle their daughter with the name ‘Hero’ and it’s noted with some irony that giving the moniker of ‘Yorick’ to someone is essentially naming them after a dead clown.

The show could arguably be described as ‘of its time’ – that ‘time’ been the ‘may you live in interesting times‘ of the Chinese curse. Though it takes a bloody scenario, it does inevitably show that when you fail to encourage and promote women to positions of power and responsibility and that you can be left with a vacuum – and in this case, a potentially fatal-after-the-fact situation where the race is on to get the right people. One of the key problems that Diane Lane’s president finds is that even with the often misogynistic male politicians out of the way, the infrastructure still has to find the right person for the job and locate the experts it needs, ones who might have been overlooked in the past.

The female actors on show largely hold the spotlight. Lane is strong and impressive as the woman forced to deal with being thrust into a world where she’s now been ‘upgraded’ to President in a matter of days, rather than the years she planned and hoped for and also having to juggle the personal aspects of her immediate losses. Former child star Amber Tamblyn has the best role in some time as Kimberly Campbell Cunningham, the daughter of the felled-President and epitome of the hard-right Conservative values, the kind of determined woman who will stop at nothing to prove a woman’s role is primarily to support her man. In this case, the men to die for are dead, so she’s rallying her own political forces with all the determination of a cake-bake-sale on steroids. Olivia Thirlby plays Hero (originally to be played by Imogen Poots) – for whom the apocalypse comes as an almost fortuitous time, given that she’s just accidentally killed her lover who had misled her about his intentions to leave his wife. Not wanting to reconnect with her mother, Hero finds herself travelling with transgender friend Sam Jordan (played by Elliot Fletcher). Sam is a character created for the series, rather than being part of the original comic and underlines the biological aspects of the virus (ie: it kills any man with a X chromosome, could kill any woman who happens to have a X chromosome but those who no longer have the ‘X-factor’ – though they may have had it at birth-  could remain untouched).

Then there’s the enigmatic and highly-dangerous ‘Agent 355’ played by Ashley Romans (in a role originally going to  Captain Marvel / No Time to Die‘s Lashana Lynch) who marks up a number of unforgiving and unscrupulous kills for the sake of ‘the mission’ even before the first three episodes are done. She’s definitely a character to watch, even if you haven’t decided on which side of the equation she’ll end up.

After the pilot, there’s very few male roles left to comment on (except briefly in flashback) but Paul Gross (who’s a long time distant from Due South) makes a deliciously despicable and misogynistic President who looks and acts a little like Mike Pence, but with more personality, even after death.

Like so many new series, it’s hard to judge it too early and it will need to evolve as it goes forward, to be something more than the next apocalypse show or something that devolves into side-glances and furrowed brows or a canvas too big to cope. The premise is full of possibilities and has, so far, avoided the potential plot-holes in which gender issues might conform to old cliches or stereotypes (yes, women can be as bad and as power-hungry as men, but this isn’t the vamping, shoulder-powered power-struggles of Dynasty or ‘V‘ etc) and the fact that all the first season episodes are directed by women is no more or less important than showing that female directors are every good as their male counterparts, something we’ve known for a long time.

There’s no infinite jest, but some gallows humour alongside tough political and questions around society… and likely enough to keep people watching. 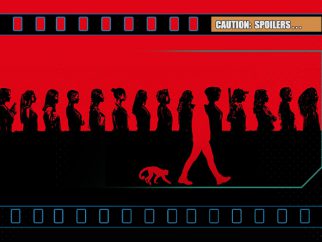