In the aftermath of last week's ambush, our 'Walking Dead' heroes are ravaged by self-doubts and motivations...

The Ravagers’ attack on Negan, Maggie and the survivors in fast and brutal with many immediate fatalities, significant injuries and the team’s forces scattered. With daylight upon them, the survivors realise they have limited time to gather their weapons and wits and ready for another attack when darkness comes. In Alexandria, efforts are divided between fortifying the walls and searching for food, though Carol’s determination to capture the escaped horses is seen by some as a vain effort.

But as all the survivors, near and far, look around, it seems the most basic efforts to survive are taking a toll on body and spirit…

For the first five minutes or so of the latest Walking Dead I wasn’t entirely sure I could trust anything I saw. Veteran director Frederick E. O. Toye shot and cut the scenes in such a stylised and disconnected way – showing what appeared to be serious if not fatal injuries to several key cast-members – that had it all been revealed to be a hallucination, it wouldn’t have surprised. The ‘heat of battle’ chaos worked well in some ways, dizzying in momentum, askew in angle and certainly grabbing the attention as you tried to work out what was happening to whom and tracking Maggie’s journey through an old mall. But that wrong-footing and sense of displacement also covered up some plot-holes in how the surviving members of the group ended up so spread out and far from each other, rather than still in the immediate vicinity or at least in ear-shot. (Gabriel all-too-easily shrugged off a slice to the neck and seemed to still be at the scene of the ambush, so quite how he made it is unclear) It also managed to kill off a fair amount of the supporting players whose names we’d barely learned and yet again, a big black guy fails to make it out of an attack.

The Reapers are certainly formidable, but they’d be a little more intimidating if they weren’t the third or fourth group of aggressive attackers that our heroes have had to face over the years in similar ways. The likes of the Governor, Negan and Alpha and the forces at their command were all memorable antagonists in their time, but so far this is just another group of nondescript survivalists with nothing to distinguish them except Hallowe’en/animal masks that are designed to catch the eye but actually have very little practical purpose as they appear out of the shadows.

I’m not a huge fan of how Gabriel is being developed in the show. It’s one thing for a man-of-faith to get more pragmatic in the face of wholesale slaughter and post-apocalyptic times and there was definitely a time when when the character was a weak apologist and a man of inaction. But now there’s very little of the spiritual about him and his tendency to kill first and support violent retribution almost makes Old Testament moral values look soft and cuddly by comparison. That would be one thing if it was just one example of how people deal with trauma and bad situations, but the series seems to be making a lot of the cast ruthless to the point of them being less heroic and more nihilistic. Melissa McBride’s carol has been the poster-woman for PTSD for many a’season now, but she almost looks well-adjusted compared to some of the reactions from other fellow survivors.

Speaking of Carol, it’s Christian Serratos’ Rosita that points out that Carol’s steely-determination one minute and beacon of positivity the next, is doing very little for Kelly (Angel Theory) who is still mourning the apparent loss of her mentor Connie (Lauren Ridloff). Rosita points out that Carol’s trying to make up for her part in Connie’s demise but that it’s actually selfish and giving false hope given that Kelly actually needs to move on from the loss. (As an audience we know that Connie is alive – though she’s been missing for almost a full season now – but Rosita seems to have hit the nail on the head and carol can’t really argue the point. At least Carol has a hand in one bit of good news, managing to capture the lost horses and return to camp. (Typically, though, there’s a darkness that imbues the triumph when Carol slits one of the beautiful and tamed animal’s throats for food).

After Maggie’s cold-hearted pragmatism last week, it’s almost as if the show knows it pushed the boundary of Lauren Cohan’s character and back-tracks just a little. Yes, she’s still barking orders and making some questionable decisions, but clearly she’s not in the mood to leave Callan McAuliffe’s Alden behind when he receives a serious wound in the attack and is getting weaker by the hour. Predictably it’s Negan who calls her out on her hypocrisy, though Alden also gives Maggie a lecture about priorities and how he’s becoming a dead weight for them. It’s good that he makes it out of the episode, though one suspects his days may be numbered given the amount of undead and Reapers in the area. (if the Reapers are as ‘devout’ as they appear, maybe a church isn’t the best place to hide?).

There’s some nice insight for Judith (Cailey Fleming) later in the episode. While we’ve often seen her as a child in form but with the mind and survival instincts of someone twice her age, it’s interesting that the story plays it both ways – her scenes only being with the other kids but also bemoaning the fact that the adults often treat them in a way that belies their experience and that the kids are far more in-tune with events than their parents and protectors would want to think. 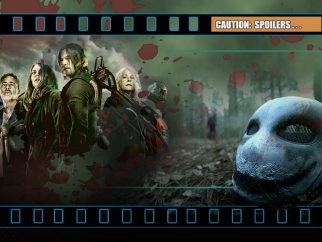