'Brain games' and 'animal husbandry' take on more dramatic meanings in the latest episode of 'Evil'...

The church asks Kristen, Ben and David to go to Cornell University and look at a study that involves stimulating the brain. It appears that a large percentage of the people trying on the device have had spiritual experiences and the church would like a professional opinion from the team on whether this is something the church should invest in. Clearly there are practical and ethical considerations, but each of the team are persuaded to try it for themselves.

It would appear that the scientists on the study-program might have forgotten to tell the trio that some of the subjects experienced not a vision of Heaven but one of Hell. Kristen, David and Ben have very different experiences from each other, each tying in to some of the fundamental doubts of their own lives, but it’s David results that worry him most of all.

Meanwhile with Kristen’s husband back, things take an interesting turn at home…

Last week’s episode of Evil was always going to be a hard one to top. Intriguingly, the next episode (B is for Brain) takes its premise from a genuine, real-life invention and the work of Stanley Koren and neuroscientist Michael Persinger who created a device to stimulate the brain. The ‘God Helmet’ (as it’s affectionally if unofficially designated) also made people have visions with some affirming that it  changed their outlook to embrace to a more religion-embracing stance. Though they are not name-checked specifically here, the tech is very similar. The fact that the team go in to evaluate whether the church should embrace this technology does lead to some interesting questions and disagreements – not least of which is the ’cause and effect’ predicament… whether the church would be embracing something of a potentially miraculous spiritual conduit or simply using tech to reprogram people into believing what they preach.  The show asks such questions but doesn’t (and perhaps can’t) offer a concrete answer on those motivations… though the way the ‘helmet’ affects our main characters certainly leaves scope to suggest that faith ahs to be more organic.

Predictably – but effectively – the concept of ‘visions’ leads to several sequences where we quickly realise that what we think we’re seeing outside the experience is obviously part of the intangible. That’s always a fine line that can leave the audience feeling cheated but it works well enough here. That’s largely down to the production values and the performances of the actors.

Aasif Mandvi had had a career built on humour and comedy (he was a staple of Jon Stewart’s The Daily Show for years) but this season has given him the opportunity to both hone that comic timing and offer opportunities for real drama. Of all the main characters, he’s the one undergoing the most challenging shifts in his faith and, once again, this week he has an experience that speaks directly to the characters own personal balance of science vs. faith as the helmet allows him to itneract with a vision of both his mother and of something far darker. Mandvi can offer more terror in a wide-eyed look than most actors can manage in a scream and he’s become a hugely important part of the show’s chemistry.

Though there’s a sleight of hand to begin with, Michael Colter’s David apparently doesn’t get any kind of vision and, in fact, the aftermath seems to stem the tide of unprovoked visions that he had already been having, leading to Sister Andrea to encourage him to forego any short cuts and get back to a more personal relationship with God – something she warns they’re going to need.

One does wonder where the series is going with Kristen. B for Brain gives us what appears to be the definitive line on exactly what she did to serial-killer Darren Pettie’s Orson LeRoux at the end of last season after he threatened her family and though it’s a crime for which she had motivation and for which she seems to have escaped retribution, it’s clear her psyche still has a lot to say. While clearly ‘under the influence’ in some ways, we’re yet to pinpoint exactly where those boundaries and influences are. In some cases, like her frozen-food left-hook to a slimy, rude and entitled queue-dodger in the store, it feels like the almost-justified wish-fulfilment that we all consider in the moment, facing objectionable situations dead-on. And if Kristen wants to get her freakon and indulge some adventurous role-playing in the bedroom including masks and bondage… well, so be it. But when packaged together with the fact she also seems to be self-harming, the package-deal personality-shift seems to justify the concern that returning husband Andy (Patrick Brammall) expresses.

Andy hasn’t been the most sympathetic of characters. It’s always felt like a character that seems surplus to requirements to the series, only injected in and shuffled out to provide some context of Kristen’s priorities and then shoved out the door again. On-screen it feels like he’s indulging his adventurous spirit and leaving Kristen to deal with the day-to-day suburban strife, though he does make the point in this episode that it’s their mountain-climbing business that’s covering the can’t-be-cheap mortgage payments. But while mother-in-law Sheryl (Christine Lahti) points out that his absence and Kristen’s responsibilities will likely shift behaviour and attitude, one almost feels sorry for him in the way he’s returned to an almost unrecognisable household. He might not have got on with Sheryl before, but in expressing his concerns about his wife, he can’t help noticing that Sheryl appears to be equally off-kilter, having conversations with a doll. Everest probably seems quite warm and safe by comparison.

Character interaction and reactions are often the pillar on which the show works best – dialogue and body-language between the leads being some of the best on television. But, arguably, the highlight of the episode has nothing to do with spiritual visions or the main cast but is a brief but deliciously-performed power-play between Michael Emerson’s Leland and Sister Andrea (Andrea Martin) in the church kitchen. Ambassadors and true believers in their own brand of faith, neither give an ounce of ground as they battle with words – though lines and actual weapons are drawn – it’s all a dance with each testing the other. Beautifully acted and shot by James Whitmore Jnr, it’s one of those moments that positively crackles with electricity and promises a lot for what’s to come.

Evil feels like co-creators Michelle and Robert King indulging their creative forces and allowed to flourish away from the CBS primetime of the original season. One hopes that the compelling, disturbing and intriguing aspects of the series that so often entertain (and sometimes educate) so well and the innate domstic chaos that reaps its own rewards (this week: yay, helium!) will start to dovetail a little as we go into the tail-end of the current run – offering some interconnective answers alongside the stylish snark and spectacle. 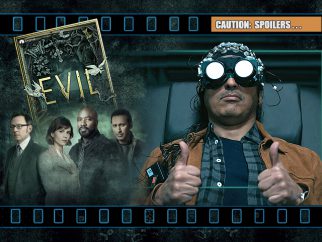