Guy Ritchie and Jason Statham reteam for a stylised but nihilistic and empty revenge thriller...

When Patrick Hill ( or ‘H’ as he’s referred to by his colleagues) starts work at the Fortico company, ready to help drive and guard the huge amounts of money and valuables they convey in their armoured cars, he seems like a simple ex-military grunt looking for a regular pay-cheque. His shooting skills are average, his social-skills non-existent but he’s got an imposing frame, a decent work-ethic and seems capable of getting the job done.  When an attempt to hijack his vehicle occurs, things change. It’s clear he’s been underplaying his shooting-skills and the fact that he kills every one of the robbers sets alarm-bells ringing. However the higher-ups have less qualms. Fortico recently suffered another armed-robbery on its vehicles, leaving two of its men and a bystander dead, and – frankly – they’d prefer to have someone like H taking care of business.

But it’s soon clear that H isn’t just a man in the right place through circumstance – he has an agenda. It’s one that is leading him to scrutinise his colleagues and use them as he sees fit.  He’s a man of huge resources and on a very personal mission…

“She didn’t say much, but she said it loud...” is one of the lyrics from Evita. For Wrath of Man, it could be said that no-one says anything much, but there’s plenty of white noise in the silence and echoes in the gunfire.

While Wrath of Man is certainly one of the better Guy Ritchie films to come along in some time, at least in the sense of sheer scale, it’s all too clear that in an effort to emulate something akin to Michael Mann’s Heat it falls far short for wholly predictable reasons. Ritchie has a signature style of hard-men ‘geezers; doing shady things but wise-cracking while they do so (over the years, to diminishing returns), but here he ups the stakes and changes the geography and for a while there’s the promise of the rather excellent film it could have been. However, Mann’s 1995 classic slowly built up a character-based duel between equally flawed cop and criminal (the great Pacino and DeNiro in fine form), Wrath of Man boasts a cast of good actors playing wafer-thin archetypes and struggling with a plot  and script that’s more pitch than depth. Stylistic shots and time-bending chronological editing alone don’t make a classic – they don’t even work consistently for clockmaker Christopher Nolan – and this entirely joyless, nihilistic film is one that feels like it will crumble if a smile or secondary character-trait even threatened to appear.

The strangest aspect of Wrath of Man is that its main star, Jason Statham – an actor more than capable of handling the trials and tribulations of a cinematic hard-man but imbuing it with knowing wit – is the least interesting, least developed and least compelling character in a story built around his singular search for justice.  One degree above current D-Level, charisma-free Bruce Willis output, the part could have been played by a terminator and seemed more nuanced. Statham’s character is meant to be a vengeful father, but with the exception of flashbacks to the events that claimed his son, he’s a cold automaton, striding through scenes, always scowling, occasionally growling but mostly shooting and inflicting vengeance. There are times when Ritchie suggests that Statham’s ‘H’ is less the man of the title and more a force of nature, like the dark stranger of some early Eastwood  outing, but he can’t even fully commit to that aspect either. We’re slowly given insight – at least some – into the method of his madness. Yet the more we learn of who ‘H’ really is, the less  sympathetic or interesting he becomes. A thug with handwavery power of a gangland king and in many ways no better than the robbers who claimed his son – the only difference is that his own associates haven’t actually murdered bystanders (at least on screen). Even then, Statham – perhaps a mafia-like  boss, who knows – seems to have massive out-of-proportion resources that are never explained: he sheds identities and has backstories retrofitted with top-level clearances that suggest governmental-grade black-ops, but none of that is explained. Like character-development, it’s surplus to requirements here.  A battle of wits between Statham’s bulldozer forced to bide his time and rival crew boss Jeffrey Donovan (a strategist forced to deal with abject violence from a rogue member of his team) could have been the lynchpin needed, but instead Ritchie just pulls the pin on a grenade and runs for cover.

To be fair, this can’t all be put at Ritchie’s feet. Essentially an efficient remake of the equally dark and oblique 2004 French thriller Le Convoyeur (Cash Truck) some of the elements that might work better with a European setting and pace simply tend to flounder here. The original got very mixed reviews, but it’s likely that US audiences familiar with Ritchie and Statham’s work will be expecting something different from Ritchie and Staham and your mileage may vary on their aims and their achievement. Too slow for action-fans, too tepid for those wanting HEAT… Ultimately the film offers nothing new, relying on star-power that’s so diluted/concentrated (depending on your viewpoint) that you begin to wonder whether it would have been a far better film without the pedigree or baggage that comes with it.

That supporting cast are talking heads waiting to be collateral damage, posturing and quipping fairly banal one-liners but who exist only to offer simplistic, snark as you try to work out who might be the ‘mole’ (And, yes, by the end of the first act, it’s ultimately the person you probably think). There’s veteran actor Holt McCallany (so good in the recent Mindhunter) as ‘Bullet’, Josh Hartnett as ‘Boy Sweat Dave’, Raised by Wolves‘ Niamh Algar as Dana, Eddie Marsan as manager Terry and Gerald Tyler as the Armourer, an international cast with the Europeans affecting decent American accents. There’s also Andy Garcia in a postage-stamp-sized role as a higher-level police-officer who has decided to look the other way throughout.

Donovan is decent in a boss-role that threatens to be interesting but which remains mostly undeveloped. However, it’s actually the wild-card character and henchman who initiates the chaos that arguably comes out of Wrath of Man best. It might take a few scenes to actually recognise him, but as the film progresses, Scott Eastwood transforms into a genetic version of his famous father, circa his Sergio Leone era, though his reckless ‘Jan’ is far more malignant (and it’s Statham going for the ‘Man with No Nmae’ vibe). There’s a real screen-presence here for eastwood who is slowly establishing some good work to match the pedigree and this too could have been set-up as a solid climactic showdown… but that final confrontation, when it comes, is so one-sided as to be anti-climactic in the extreme.

The time-twisting editing gets somewhat tedious as we’re drip-fed story elements that take us backwards and forwards along a timeline to show motives. Such elements can be useful to obscure details and keep a mystery going, but all too often they’re a crutch for an inferior story. The general rule is that such tricks only work well if the reveal is an amazing sleight of hand or the story would already stand up without them. Neither is really true here. Equally the violence is fairly graphic if not always convincing or consistent. Sometimes there’s point-blank executions or sniper-precise targeting offering blood-splatter and in other cases an almost coy approach as several key characters die just off-frame for no real reason (the film is an ‘R’ so it can’t even be down to wanting a better certification).

All in all, a highly generic hard-man movie that promises to be something far more interesting and then falls back on its predictable elements, mistaking empty moments for being enigmatic. It’s better than some of the bland formula tent-poles out there that merely rely on CGI, but, at best, one could offer that Ritchie gets plaudits for his intent rather than the result. 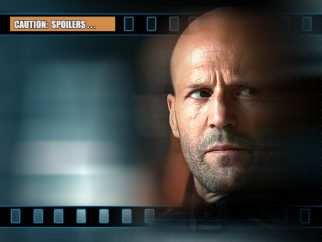 Dead Cert: Raimi & Campbell to get Evil once more, (but…)…