There's an appetite for deconstruction in the penultimate episode of the Disney+ series...

With John Walker’s actions having been screened across the world, Sam and Bucky feel a personal and professional need to bring him in  – however ‘Captain America’ isn’t going to go down without a fight.  But even if the two men can stop the tarnished hero, they have other problems with which to deal.

Sam is still bothered about whether he can – or wants to – live up to the iconic mantle that Steve Rogers wanted for him. Isaiah Bradley has his views over the way he was betrayed by his own country and Bucky sees the shield as a legacy of good and bad that is made by the man who wields it, but for Sam it’s going to be a decision he puts aside as he deals with closer-to-home issues for his family.

But the world isn’t waiting. Various interests and various agendas are moving forward with outside forces picking their methods and operatives… all heading towards a fateful and inevitable collision…

While there are some truly exceptional and powerful scenes in this week’s episode, there’s also a lot of bizarre tweaks and pacing – which one can only hope was down to the stop-start aspects of filming during COVID and the efforts to start rounding everything up. At times it seemed as if someone had come along and randomly re-edited a proof-of-concept reel for the series to fill some gaps, collecting together scenes from story-arcs to date and throwing them in, just not evenly. Events you would have expected to have a longer build-up were over with quickly and elements that might usually have required a scene took up far longer… and there’s more than one moment whether you wonder if you’ve lost count and this is the final episode and a sudden sprint to the finish-line…

The showdown / smackdown with John Walker – inevitable after that cliffhanger last week – was a great, well-choreographed sequence, emotive and perfectly decent in its own right… but that season-long build-up is notably all sorted pre-credits. Once the faux-Captain is taken down, it’s almost as if he’s ticked off the to-do list and for most of the episode, as we pivot away to other things, we don’t know what immediately happened to him. A little later we do see that Walker hasn’t been thrown into Guantanemo or a deep-dark hole never to be an embarrassment to the government again – indeed it seems like he’ll a totally free man…he’s simply appearing before an all-shades-of-grey government committee who tell him that they’re… well… rather miffed at him and as punishment he’ll no longer be Captain America and will be… ‘other-than-honourably’ discharged. Wait. That’s it? This is the guy who just beheaded someone on live-streamed television, clearly NOT in an act of self-defense, the blood barely dry on a shield bearing the stars and stripes and likely to cause the biggest international outcry since coke changed its formula… and he’s barely getting a slap-on-the-wrist – clearly able to walk out of the hearing petulant and unimpeded and seen in a mid-credit sequence making a makeshift shield of his own (uh-oh!)?  Sorry, but even given in-story complexities (and with the assurance to viewers that there’s clearly more of his story to be told in the closing episode) that’s just a little ridiculous in a series that – however fantastical – is also preaching about real consequences and accountability. (And, seriously, Marvel… so soon after Wanda Maximoff really failed to pay any price for her ‘shenanigans’, you’re setting a worrisome pattern!).

It does lead to a unexpected cameo in the form of Julia Louis-Dreyfus (Seinfeld, Veep) making her debut as Contessa Valentina Allegra de Fontaine and making an offer/demand to Walker. Those unfamiliar with the comics’ versions of the character will have seen her as a serpentine, morally-questionable authority-type full of nice one-liners  (“You can just call me Val, but don’t call me Val, just keep it in your head…“) in her simultaneously mysterious and direct approach. Those who do know some of the character back-story will also appreciate that this all feels like groundwork for something beyond the immediate series and perhaps even a Fury-parallel initiative to collect together ‘heroes’ who will follow deniable orders far more directly than the Avengers. However that does turn John Walker from a major threat and misguided weapon to a opportunistic pawn, so we’ll see.

The Isaiah Bradley scenes show the benefit of a slower-pace and relying on good acting rather than plot-driven set-pieces. Carl Lumbly’s monologue about the way his government treated him is heart-breaking, made all the more poignant by the fact that  – as we noted previously – it’s largely inspired by just as heinous actions by the real American government that covered up decades of sanctioned abuse. Bradley clearly thinks that the Captain America moniker is (and has always been) tainted and says that not only doesn’t he want the shield but that no self-respecting black man in America should want it either. While Sam and the audience may not be of quite the same mind, Bradley’s views do resonate and he has absolutely every right to feel betrayed by his country and soured to its patriotic hyperbole. The scenes seem to be what the makers of The Falcon and the Winter Soldier really want to discuss, the backbone of the true intent of exploring what ‘America’ means to different people, yet it’s only one part of a series that seems determined to tilt at multiple issues yet can’t always connect the dots.

While all this is going on, Bucky and Sam are also putting aside the plot of the militant Karli Morgenthau’s increasing campaign and are helping Sarah Wilson mend the family boat… and to have a heart to heart about the important things in life such as family, race, humanity and not flirting with your buddy’s sister. Though it’s all well-executed (the dialogue is as effective as the  shield-throwing CGI is seamless) and important to the central themes it also seems like a slamming on of plot brakes and an artificial pause (again, one wonders if these were some changes and rewrites forced by pandemic restrictions). The momentum is fluid – is this pause taking days, weeks, longer… a work-out montage for Sam suggests time is passing even if outside plot elements seem screamingly ever-urgent? Anthony Mackie and Sebastian Stan convince as buddies who would die for each other but disagree on some of the fundamentals. However, several home-truths are stated and it’s clear that while Bucky doesn’t want the shield either – acknowledging his history and that of the weapon – he remains convinced Sam has earned it.

Elsewhere, we have a nice scene between Bucky and Zemo that leads both of them back to Wakandan debts and Karli Morgenthau’s story is picked up towards the end, though the series still doesn’t quite know how to play her priorities from scene-to-scene, sometimes sympathetic, sometimes less so. She’s gearing up for an attack on a NIMBY committee looking to shove refugees elsewhere and out of sight and that leads to a book-ending re-appearance of Batroc, whom we saw at the start of the series and possibly being used by Sharon Carter (she’s totally the Power-Broker, right?)…  it’s yet more elements to add in to what’s looking to be a rather crowded finale next week on both a character and concept level.

All in all, ‘Truth‘ is a solid and important episode, it’s just that editing and flow seems strangely askew and distracting.  The finale is a week away with a lot to do – and it’s only with that episode we’ll be able to tell if The Falcon and the Winter Soldier truly achieved its mission statement. 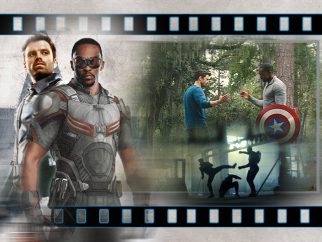 Netflix gambles on Snyder’s ‘Army of the Dead’…