With Starling on leave, she's forced into a difficult negotiation with her mentor U.S. Attorney General Ruth Martin...

Clarice has been forced to take leave, official policy making her unfit to work for several weeks as she recovers from her ordeal. Clarice immediately wants to challenge that ruling and seeks out her ‘mentor’ U.S. Attorney General Ruth Martin (Jayne Atkinson). However Martin wants a quid pro quo for even thinking about helping Starling. Ruth wants Clarice to stop avoiding her daughter’s calls. Catherine Martin (Marnee Carpenter) wants to talk about the ordeal she suffered as a captive of Buffalo Bill and as Clarice is the one who saved her, she thinks Clarice will listen to her. But Clarice knows their ways of dealing are vastly different and realises she may be more a hindrance than help.

Elsewhere the ViCAP team try to identify Clarice’s attacker but come up empty-handed until Ardelia follows a hunch.  That brings confirmation of someone interfering with the tea’s investigation, but is the real puppet-master closer to one of them than they realise?

There really isn’t a ‘case of the week’ here as Clarice returns after a few weeks away from screens and attempts to find a way to return to duty. Starling is on compulsory leave after her (latest) ordeal and so the story is divided between searching for the identity of the man she glimpsed at Woodhaven Hospital and Ruth Martin essentially forcing Clarice to come to dinner and be face-to-face with daughter Catherine (whom Clarice saved from Buffalo Bill) in return for listening to her pleas for reinstatement.

At first glance, it has seemed somewhat cold for Clarice to consistently brush off Catherine’s pleas to talk, but the two women have very different ways of dealing with their shared trauma as survivors. Clarice is cynical, much preferring to push forward and bury the past as deep as possible. On the other hand, Catherine (a bavura performance of PTSD by Marnee Carpenter) has been completely unable to move past the experience and it’s actually doubtful Clarice would be able to offer any real emotional help. After all, as she herself notes, she barely survived despite being a trained agent – Catherine had no such fallbacks. However the dinner exposes that Catherine is hardly getting the help she needs from her mother either, in fact Ruth Martin is better equipped to be favour-trading in Washington than dealing with familial issues that can’t be solved with platitudes or blank cheques.

Clarice’s own efforts to understand what happened at Woodhaven and  – going back further – as a captive of Buffalo Bill, finally make her realise her own memory may be playing tricks on her. She’s able to picture the man at the hospital, but she also has to acknowledge that Catherine’s recall of events of their time in Bill’s captivity is better then her own and that Starling has blanked out some of her memory. We will have to see if that makes her more cautious going forward but it actually adds far more weight to the stance that Clarice should be away from the job for her own state of mind.

But that’s not going to happen if the series is to continue and so the investigation continues.

When the official DNA results come through with no hits to help identify Clarice’s attacker (which is unlikely, even given the early stages of the science in the 1990s), Ardelia is somewhat suspicious and, acting on a hunch, retrieves the finger-nail sample and has them run again independently and under another name… and, bingo there’s progress. But it also means that someone with a lot of clout is undermining every step of the investigation and so the ViCAP team decide to keep all their initiatives under the radar, even from Krendler until they can collate their leads. Krendler has his own distractions with his estranged wife having fallen off the sobriety wagon they’ve both been on and it now looks as if their amicable separation could be about to get nasty. Thankfully he has a good (re: ruthless) lawyer named Hudlin (Raoul Bhaneja) who promises to make sure he gets custody of his scared kids… though, less thankfully, we learn that Hudlin is…. drum-roll… the man behind Clarice’s ordeal at Woodhaven!  The teaser for the rest of the season (which ran after the last episode back in March) perhaps stole some of its own thunder and so plenty of viewers may have already been privy to the identity of the man pulling some of those hospital/conspiracy strings – which is a shame as without that heads-up, there’d have been no obvious trail until the reveal.

Clarice is still a solid show – performances are good, there’s a mixture of darkness and light and a sense of the 1990s setting without it being overpowering. But the series’ success should rely more on having its lead evolve rather than having her face trauma after trauma and surviving without learning… so far she’s continuing to make similar mistakes again and again and while we like our heroes to be fallible and flawed we need them to rise after they fall. Clarice is a dynamic  character but is treading water and often feeling out of her depth, her intuition not enough to get her through. It’s time to give her some successes and positive strides and perhaps better therapy… rather than just obstacles and build on the ensemble’s combined acting/investigative talents that also lift it higher… 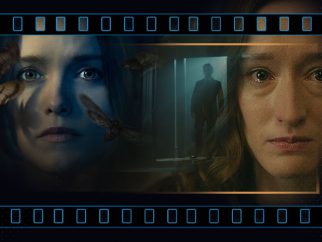 8
'Clarice S1/EP.06 - How does it feel to be so Beautiful?' (television review)
Tags
CBSClarice
Categories
TELEVISION REVIEW
SHARE THIS ARTICLE
OLDER ARTICLE