A potentially good action-yarn gets hijacked by horrible cliches, miscasting and a criminally ropey script...

Tom Buckingham (Sam Heughan) is a hard-nosed SAS soldier responding with extreme prejudice to threats to ‘Queen and Country’. Off-duty, he’s thinking of proposing to his girlfriend, Sophie, and decides to whisk her office to Paris to put a ring on her finger. But his most recent mission, against a group of mercenaries, didn’t net all the rogue operatives and now one of them – Grace Lewis  (Ruby Rose) has decided to make an impact by detonating a bomb in the Channel Tunnel.

As luck would have it, Tom and Sophie are on the same train and now it’s up to him to save the day. But if mercenaries bent on revenge and a train full of innocent bystanders isn’t enough, Tom is unaware that the British government has been complicit in working with Grace’s team before disavowing them… and now it will do everything it can to make sure the truth doesn’t come out…

I am all for a ‘so-bad-it’s-good’ outing and I can set my mind to a simplistic action release that’s just wonderful time-wasting fun. But even I had to struggle to make it through SAS: Red Notice, a Sky Original movie that squanders both a decent cast and a half-decent premise in almost every way possible.

SAS: Red Notice‘s major fault is that it doesn’t quite know what it wants to be, or rather that it wants to be a lot of things and doesn’t quite achieve any of them. It feels like the project was started with an eye to being a modern Who Dares Wins-type outing, a celebration of the hard-edged men risking their lives for queen and country, and that on the strength of that concept it managed to attract a significantly interesting cast on the promise of a decent script to come later…  the trouble is that script never turned up. Instead the project morphed into a production that blows its budget on some decent sets and post-production explosions at the expense of any subtlety and embraces every single stiff-upper lip cliche and with enough dodgy OTT moments and quips to make even Roger Moore raise an eyebrow.

In what feels like like a simple mash-up of opportunistic concepts, the entire blame for the enterprise can’t actually be laid solely with the film production itself.  The concept is based on the 2012 book of the same name by Andy McNab, the first in the series of books featuring a sqaure-jawed operative named Tom Buckingham. McNab was the famous ex-British Army/SAS soldier turned author who controversially turned his post-service career into becoming a military-adviser for various film and tv productions and writing a string of books. The high-point was arguably Brave Two Zero, published in 1993 and detailing his own service in the Persian Gulf War (and which became a mini-series in 1999 starring Sean Bean). Subsequently, his straight-up fiction work produced a range of high-profile and profitable but  fairly template potboilers marketed on his supposed inside-knowledge of the fighting force rather than the chance of winning any literary prizes.

In many ways this is a ‘Who’s Who’ checklist of international faces.  At the centre of the piece there’s Outlander‘s Sam Heughan (still looking for that elusive feature hit beyond the cult time-shifting romance that made his name… and, news-flash, this isn’t it, mate…) as Tom Buckingham. The character surname is the first clue on the lack of thought and originality that’s gone into the paper-thin hard-man. Swinging for the Downton Abbey demographic, we see him returning to his family’s sprawling estate and acting like a young Bruce Wayne, complete with sardonic butler and tales of when Britain was an empire. Master Buckingham is taking time off from deep-thought while snapping necks and thinking of proposing to his girl-friend, Sophie (Hannah John-Kamen) with a family heirloom that was allegedly cut off a maharajah’s finger, pip, pip. Sophie’s nursing job is to save lives and his is to take them, so will she ever truly understand his warrior soul and will he ever be able to put her before Queen and Country? (Initiate lip-quiver).

Screen legend and double Oscar nominee Tom Wilkinson, who has been better in just about everything,  delivers his patriach role with an ambiguous accent lending some thespian quality to a boo-his military-man William Lewis and stern father-figure to daughter Grace. Ruby Rose, late of Batwoman, (though this would have been filmed before her departure) plays Grace with commitment to the role and  gives the narrowed, steely-eyed glance and furrowed brow required. She knows how to handle herself in close-combat choreography, but this feels more like a show-reel for future endeavours, a little like Gina Carano’s Haywire – acquitting herself within the basic demands of the piece but really just serving notice she’s available for something better.

You might expect Noel Clarke (Doctor Who, the Bulletproof series and the low-budget but superior SAS-themed I am Soldier) to be more at the centre of the action, but he’s one of several members of the cast that feel miscast and wasted. He’s actually a Major and the team’s boss, but  is quickly touted to viewers as the compromised link in the chain of command and so gets to stand around, bark orders and look a bit shifty as he taps messages to the terrorists. Marcella’s Ray Panthaki is also weirdly adrift as the Prime Minister, giving a lot of foul-mouthed orders but having not an ounce of real gravitas. Owain Yeoman (The Mentalist, Emergence) is Grace’s brother, setup early as the weak-link and sacrificial lamb of proceedings but who never really gets a decent pay-off. Tom Hopper (The Umbrella Academy) is Buckingham’s fellow officer and best-mate Declan, though it feels like the production wasn’t sure what to do with him by movie’s end. BAFTA Award-winner and veteran actress Anne Reid also appears as a fellow passenger and then merely vanishes.

The always marvelous Andy Serkis – the best thing in this – pockets the payday and has a whale of a time as the amoral, sardonic mover-and-shaker George Clements whose only consideration is getting paid and getting out alive… and it’s a pity he’s largely used for plot punctuation and quippy one-liners as he’s easily the one who knows how silly this all is and doesn’t bother to hide it.

Somewhere there’s a decent film to be made here – either something that’s an all-in dark and gritty actioner about the ruthless and expedient way that ‘civilised’ countries use and abuse ruthless tactics for profits… or, alternatively, one that plays everything as a pastiche – one scene in which Buckingham takes down a guard pretending to be a gardener is just such horticultural hokum, almost fit for an SNL or Comic Relief sketch. But in vacillating between the two extremes, it’s laughable in a non-intentional way. This is the kind of appallingly-handwavering ill-thought-out tosh that suggests the hero can ride up to the very door of St. Pancras and leave his motorcycle and helmet propped up outside while he jaunts of to Paris; where a headline-grabbing terrorist on the run takes off her disguise for no real reason ahead of the hijack and then gets into the train driver’s cab with all the effort of strolling into the buffet-car. It’s military machinations as pure testerone-hued fairy-tale and makes even recent Bruce Willis debacles look like Shakespeare.

Sky Originals, like Netflix, has some hit-and-miss outings – all well-funded but with some strong hitters and others not quite ready for primetime. Everyone involved deserves better. There are three Tom Buckingham books from McNab, but on the strength of this, there’s no television franchise in the offing and it should all be retired and de-mobbed with extreme prejudice. 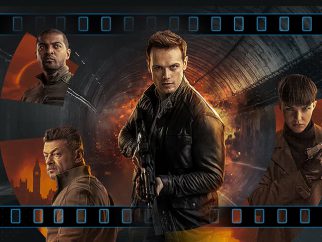