Netflix's adaptation of Sarah Pinborough's post-modern pot-boiler retains many of its WTF twists...

Louise is a young single mother who rarely gets the time to go out and enjoy her life beyond time with her school-age  son, Adam. So she seizes the opportunity to head to a local bar to meet up with a friend. The friend fails to show but Louise does strike up a conversation – and more – with a handsome Scot named David.  However despite the mutual flirtation, David suddenly declines anything further and vanishes into the night.

When Louise heads to her work as a secretary at the local clinic, she’s horrified to realise that David is the new associate and that he’s introducing his wife, Adele, to everyone. Feeling awkward, she avoids being seen by the couple, but she knows that it’s a matter of time. When David and Louise meet formally he’s full of apologies  for his previous behaviour but there’s obviously still an attraction.

When it becomes clear that David and Adele’s marriage clearly has its problems, secrets and a complex history involving death, drugs and dreams, it seems that the illicit spark between Louise and her boss may yet be rekindled.

Then, apparently by accident, Adele meets Louise on the street and a dangerous game of deception begins between people who know too little and people who, impossibly, know more than they should…

The marketing for Sarah Pinborough’s original best-seller often targeted the nature of a rug-pull plot development and framing near its end.  Despite starting from the strong source-material, the #WTFThatEnding hashtag is a slightly harder trick to pull off for an on-screen adaptation where productions are often led by ongoing visuals (rather than just mental inferences) and which often want their audience to come out of a partially-deceptive narrative feeling ‘shocked but smart’ rather than ‘tricked’ or ‘cheated’. The art of the deal is letting the audience work out the hook just before it’s confirmed – think The Usual Suspects, Identity or The Sixth Sense – and to a lesser degree any of Shyamalan’s subsequent works. It’s also a truth that such a task it is now harder to achieve… too many jaded audiences are familiar with sleights of hand and thus far harder to impress…

So while there are some legitimate quibbles to be had,  saying that viewers of the Netflix adaptation of Behind Her Eyes might be able to see that final turn of the screw coming before the credits roll on the sixth episode is not speaking to any real failing or weakness in the limited series or to any idle boast… simply that Steve Lightfoot’s interpretation of the story doesn’t rely on that one reveal alone. It’s actually more accurate to say it’s the last chapter as a whole that will dictate your opinion of the story entire.

All the essential factors and elements are, in retrospect, there to be seen – to their credit, cleverly laid out by Pinborough and Lightfoot in both forms (though the printed page perhaps allows better deceits). But the actual climax and conclusion of the piece arguably makes the experience feel less like a typically ingeniously-blueprinted thriller and more like an outrageously daring design made text-and-flesh. There’s almost an audacious avant-guard flourish here in the way the canvas shifts and you’re suddenly in a different genre.

For those unfamiliar with the book, Behind Her Eyes ‘ early developments are  deliberately templated to feel like an edgier-end Lifetime movie: a trials and tribulations, sex and sociopathy love story where bad decisions and liasions lead to questions of who-knows-what and ultimately what-will-they-do-about-it? Then comes the more ethereal elements… if you’re also okay with lucid dreaming and remote viewing being sprinkled into that emotional landscape (an idea addressed in a far different way in Alex North’s The Shadow Friend), then you’ll like where this goes. Your enjoyment will largely come down to whether the specific revelation here is something you find a welcome surprise or too big a shift.

If the story requires a suspension of disbelief, the characters populating it are fascinating and are given extra punch by quality casting. Simona Brown (as the compromised Louise), Eve Hewson (as the icy, fractured Adele) and Tom Bateman (as David, the man they both love) give it their all and impress with their commitment to proceedings. Hewson, in particular, walks that fine line where viewers will pull for and against Adele depending on the moment and if Louise is the only one we trust, there’s still an intensity in how she’s pulled into a far wider web than we initially suspect. Robert Aramayo (Game of Thrones) who plays Rob, the drug-addict whom befriends Adele in flashbacks to her time in convalescence, also makes an impression, particularly in later episodes.

No, Behind Her Eyes won’t suit everyone’s pallet but, like the novel before it, it’s one of those stories that will likely have you talking about it long after the final scene… 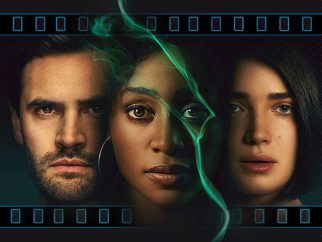