For all its fun and easter-egg catnip, 'WandaVision' is actually a primal portrait of grief given form...

Agatha Harkness has Wanda Maximoff as her prisoner, but it soon becomes clear that the West View phenomena is not of the ancient witch’s own making – rather she has been manipulating the existing events to discover the source of Wanda’s enhanced abilities. In an effort to pinpoint that source and the trigger, Agatha makes Wanda relive the traumatic parts of her life – and for Wanda that’s all about loss.

Grief does strange things – and even more so when you are the heir apparent to remarkable, powerful abilities.

As Wanda’s memories are reawakened and an ancient power-source harnessed, it becomes clear that some of the events that SWORD’s director Hayward has been claiming to have witnessed may be suddenly suspect – but if so, what is his plan?

“What is grief but love persisting..?”

For some time we’ve been at the point where any self-respecting genre fan will barely dare to turn on their computer on a Friday unless they’ve already got up at dawn to watch the latest WandaVision episode… the spoilers are so abundant that they reach far and wide and can trap you into ‘unwilling knowniness’ merely by news sites indicating what’s trending. But we are now undeniably in the home-stretch of WandaVision which means developments are coming with a canon/cannon’s roar and the end (and answers) are – perhaps – in sight.

This eighth episode is essentially the explanation we’ve been waiting for. Certainly it doesn’t answer all the questions the audience has, but it’s now providing serious structure and context to the chaos and the magic.

Kathryn Hahn gets some show-stopping moments as we first explore Agatha’s past. This means some coven-ing  set in Salem (it’s a shame that the oppressive, historical events of that time and area are too often short-handed to witch-burning stereotype for dramatic purposes) but it manages to subvert some expectations by having the coven itself be the ones putting Agatha on trial. Unlike the comics continuity MCU-Agatha seems a genuinely bad, if sassy apple but we do get to see that Agatha is not  – as some believed – completely behind Wanda’s situation, more an opportunist who manipulated it, trying to work out how Wanda’s achieved this West View anomaly and to take the power for herself. To do that, she guides Wanda back through a life filled with moments of pain…

The sit-com framing elements used each week might have appeared to be a creative Marvel affectation, fun and interesting but ultimately a visual side-effect.  Not so. Previously On… gives solid reasoning, with the new knowledge that the young Wanda’s life in Sokovia was fairly bleak except for the times her parents could find illicit DVD copies of old shows such as The Dick Van Dyke Show, Bewitched and Family Ties to create some family-time calm.  When her parents are killed by a western missile (created by Stark Technologies) that comes crashing through the roof, those television days are firmly over, but the days of trauma have begun – and so, on a subconscious level they are linked together.  Next we see Wanda being strangely affected by – and ultimately receiving a power-boost from – the Infinity ‘Mind’ Stone in Loki’s sceptre during her time as a prisoner/experiment of Hydra; we know Pietro was killed (during events in Age of Ultron), Vision died twice in Infinity War and each time Wanda was powerless to control the situation. When she witnessed SWORD doing experiments on her husband’s barren form it was almost the last straw… a power that might have withered on the vine is now blossoming.

But here’s where it gets complex and contradictory. Despite duplicitous Director Hayward claiming to Monica that Wanda broke in and stole Vision’s body, we now see that’s simply not true: (she was invited in and she left the base traumatised but still holding on by her finger-nails). She discovers that Vision had apparently bought a house and planned for the couple to live there before his demise (by Wanda  suddenly finding the deeds on the passenger seat of her car, but how did it get there?). She drives to the location and sees various people we’ve seen since in her fantasy (but weren’t they identified as SHIELD agents – is this a town built for spies?) and it’s only then that her grief finally explodes, giving life and form to that anger and despair something deep within her and transforming the town of West View into the surreal centre-point we’ve seen so far.  It’s a burst of energy on a primal level that arguably resonates more than every screen attempt to do a ‘Dark Phoenix‘ and basically brings us to a ‘This is where you came in…‘ moment.

It all leads to the long-anticipated ‘Scarlet Witch’ name-drop, the first time that Wanda Maximoff has been referred to as such in the MCU continuity (though it was a staple since her first appearance in Marvel Comics). Rather than just a moniker it seems like this is intended to be a destined manifestation of raw power, the chaos magic that allows Wanda to literally alter probabilities and make reality bend to her will. If it’s almost Phoenix-level proportions, that could spell real trouble.

Acting-wise, Elisabeth Olsen rises to every challenge and Paul Bettany (who has had slightly less to do in these dying episodes) gives a nuance performance in the flashback scenes – promising more for next week Interestingly there’s no sign of Pietro (or ‘Fauxeitro’) or Monica this week (despite that mid-credits extra last week). There’s still a lot for this series to get sorted next week, lots of characters to align and several confrontations to play out (here’s hoping Director Hayward gets his just desserts and that Monica gets to head-up SWORD). There’s been plenty of aspects that might yet get referenced, that recurring helpful mailman,  Agent Jimmy’s mysterious absent witness (who brought them all here to begin with and who ahs been referenced several times, so feels like a story to be told) and an over-all review of the series will depend on how deftly that plays out, but as we head into that last entry, it’s been an interesting ride. For those who hung on through this week’s credits, there’s also the arrival of that revived, but perhaps blank-slated Vision body that seems to have been Hayward’s plan all along. This is yet another aspect ripped form the comics pages (from the John Byrne era) which will provide either/and a battle royale between Visions or a acceptable way for our favourite synthezoid to exist beyond the Hex.

Can it all be wrapped up neatly in the finale – and should it?  Some of the scnes glimpsed in promotional trailers for the series over-all have yet to be featured (such as Vision and Wanda agreeing to ‘fight’ for their home together). If that rumoured ‘big cameo’ does transpire it seems the causal link to the movie-arm of the MCU will be intact and may continue on… the next week will definitely seem a long one, waiting to find out… 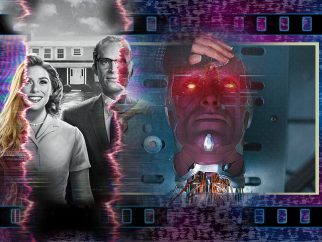