'Are You Alright' asks the episode's title and the VICAP team - and Clarice may not have the answers wants...

Back from the recent siege events, Clarice is eager to push for answers about the home invasion and potential serial-killer captive that she still feels masks a greater agenda. The arrested man, Karl Wellig is in no mood to talk or give the team the answers they want. The team must use all their skills to get Wellig to talk, but Clarice has some ideas of her own on how to get her teeth into the solution and break through his icy facade.

However as much as VICAP want him to talk, others may want him silenced…

In some ways it feels as if the rather self-contained second episode and (this) third entry in Clarice could almost have swapped places without much change to the narrative. Many of the pieces of this week’s story deal with the intruder arrested in the pilot and VICAP’s subsequent attempts to get information from him about the wider conspiracy Clarice believes exists. Once again, it’s a mostly a one-location outing (likely driven by COVID restrictions) but given that it’s the rooms and hallways of the headquarters it works well enough as the various members of the team take shifts to ‘break’ their prisoner.

Despite the fact that the outcome of the episode is probably predictable if you’re paying attention, there’s still enough tension generated by the set-up and an interesting cat-and-mouse game that smartly defers from making it a pure Clarice initiative that a lazier script might have offered. Rebecca Breeds’ Clarice may be the titular star but on the strength of these three outings to date, the aim is as much for an ensemble show with Starling bringing her talents and observations into the room but not always dominating at the expense of the supporting cast. You always get the feeling that the team existed and worked well before her and though she brings assets and talents, it’s her job to fit in as much as it is the team’s responsibility. But we do get to see a Clarice whose still feeling her away through the social dynamics of her job, but slowly gaining their respect when she endevours to work with them – by episode’s end Cudlitz’s Krendler believes that Starling’s instincts are likely on the money.

Michael Cudlitz (late of The Walking Dead and fast becoming a director in his own right) and Lucca De Oliveira continue to be the most interesting members of the supporting cast with Kal Penn now getting a bit more of the expected screen-time and Jayne Atkinson’s politically-driven Ruth Martin continuing to flutter around the edges. The brief cutaways to events outside the headquarters involve Martin trying to deal with administrative oversight and problems closer to home with her daughter Catherine (Marnee Carpenter) still far from recovered from surviving Buffalo Bill’s attack.

Kris Holden-Ried (The Expanse / Umbrella Academy) as the captive Karl Wellig portrays the kind of killer that’s more dangerous when they’re cornered. Everyone (including Wellig) knows he’s not the criminal mastermind they’re truly after, but he’s savvy enough to know that the VICAP team are playing catch-up and that he holds most of the cards… and that he really has no incentive to play most of them. It’s only when there’s a genuine threat evolving that he has to decide his fate on the lesser of two evils.

The death-moth motif continues with director Doug Aarniokoski and the productions VFX team creating some truly eerie and disturbing visions to proceedings – but also using smaller, technical  details such as the smoke-filled rooms that are so different from modern police-shows crystal-clear and often sterile locations and an interrogation that, scene by scene, gets closer and closer to the faces of its participants. These three episodes have been an interesting start to the series, making its roots and covid restrictions work in its favour – a slow momentum  balancing character development and procedural. The execution is good and the tone highly effective as we – and Clarice herself – wonder if she’s truly for for work… though once again the show finds itself in that dilemma of looking back over its shoulder to imagery, characters and situations in the source material that it cannot directly illuminate but merely allow to cast long shadows.

To truly go forward and fulfil its potential, the show – like Clarice Starling herself – will need to look ahead not behind. 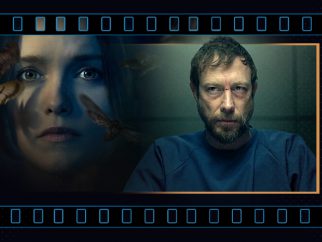