Firefly's Alan Tudyk heads up the dark, but funny comic-book adaptation about an extraterrestrial with an extra agenda...

Nothing much happens in Patience, Colorado. It’s the kind of normal place that appears to be full of normal people have normal lives far away from the bustling city and at least politely pretending to mind their own business.  But appearances can be deceiving.

It might be the kind of place near to where doctor Harry Vanderspeigle (Alan Tudyk) would buy a quiet lakeside cabin, but it’s also the place that a visitor from another world  crash-lands and kills the medical man and assumes his identity… where the alien learns the English language by watching reruns of Law and Order... where the local mayor has to seek out the alien’s  ‘pretend’ Harry when the town’s own resident doctor is killed and he needs an autopsy… and where the alien must temporarily forestall his more devious global plans to investigate a murder for which he’s not responsible…

‘Normal’ appears to be relative.

Can ‘Harry’ protect his secrets while trying to uncover the many that lie just beneath the veneer of Patience itself..?

In what could have been a nice but somewhat cheesy concept for a network, Resident Alien‘s cable-presence means it isn’t afraid to go a bit darker even while maintaining the necessary quirks and humour – and essentially honouring the intent and complex, tone of the original comic (by Peter Hogan and Steve Parkhouse). Our titular character is not a cute and sympathetic fellow needing to phone home: he’s essentially the extra-terrestrial middle sibling of House and Dexter  – not only does he ruthlessly kill the doctor whose form he subsequently takes but we find out before episode end that his stalled mission is to initiate the timing mechanism on a device that will wipe out humanity. He may be enthralled with the detective work to find the community murderer and emulating the ‘kun-kun!’  beats of Law and Order investigations, but they’re simply an exercise in passing the time and helping him understand humanity while happily continuing to try and recover the means to destroy them all.

It’s largely thanks to Tudyk’s skills as a physical and vocal performer (seen playing ‘Wash’ in cultural phenomena Firefly, a man of multiple, dangerous personalities in Dollhouse and the two dependable droids K-2SO in Rogue One and Sonny in I, Robot) that he can deliver child-like wonder and naivety and yet cold pragmatism in the same scene: it’s completely plausible that his  ‘Harry Vanderspeigle’ could choose to save someone in danger or choose to kill them, that he could infuriate some and yet reluctantly draw other outliers into his orbit. It’s equally delightful to watch him get drunk at a bar for the first time  (“I’ll say one thing about whiskey… it’s allowing me to make smart, rational decisions…”) and then see him panic as he seeks to genuinely terrorise a child who can see through his deceptions by literally being the monster under his bed that the parents don’t believe exists. The murder in the first episode (of the town doctor, thus drawing in ‘Harry’ as a replacement) will be a key story-thread through the episodes as Harry looks for the local killer, but that central fatality is almost the decoration and maguffin of the piece – the real mix of drama and fun being in the decisions that Harry makes along the way. Will he choose to spare the planet – while the outlook is obviously hopeful from a personally human point-of-view, it’s refreshing he has no inclination to do so thus far and remains firmly on mission.

There will be several familiar faces showing up as the show progresses, including LOST‘s Terry O’Quinn and Terminator‘s Linda Hamilton, but it’s interesting that the regular supporting cast is made up of established yet slightly less recognisable faces who completely hold their own. Sara Tomko (from Once Upon a Time) is strong and fearless as Asta Twelvetrees, Corey Reynolds as the ‘always bet on black’ Sheriff Mike Thompson is smartly self-assured and his deputy Liv Baker (Upload, No Tomorrow’s Elizabeth Bowen) has a gracefully awkward demeanour and Silicon Valley‘s Alice Wetterlund as bar-owner D’arcy also provides sardonic support.

Necessary suspension of disbelief aside, Resident Alien has all the makings of a cult hit, a Northern Exposure for a more cynical generation – delivering on the promise of its many trailers and marketing, spinning a lot of narrative plates (or should that be flying saucers?) in its pilot and is almost too stuffed to the gills with ideas. It straddles several genres well enough, though it will likely need to make some decisions and gain a firmer footing in the weeks to come. 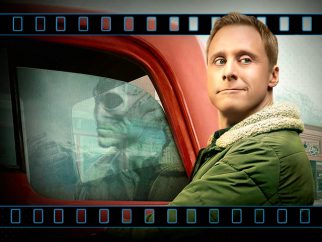