As 'The Time of Two Engines' dawns, where has Sean been and where is Snowpiercer going?

Andre Layton (Daveed Diggs) has managed to successfully execute his revolution to take control of Snowpiercer, but there’s been no time to celebrate. Mr. Wilford (Sean Bean), the creator of the train and presumed long dead has made a return aboard a smaller but arguably far superior transport named ‘Big Alice’ and now the new train has Snowpiercer in its jaws. He can control its speed and movement and his subordinates immediately make his demands known, if not his full intentions.

Layton must gather his tired and weary forces and take away some of the freedoms fought for if they are to rally against Wilford, but it seems the billionaire has all the cards… and is willing to confine the train to an icy death if his rule is questioned.  But Mel (Jennifer Connelly) has managed to get back on the trains before their departure and though she’s quickly captured aboard Big Alice, she’s not going to submit to Wilford’s whims without a fight and she has a few aces of her own to play. However, is she ready to face the daughter she left behind and is Layton ready to risk everything to escape the latest oppressor?

Is the fate of Snowpiercer’s various alliances and relationships to be frozen or thawed?

The first season of Snowpiercer wasn’t perfect in terms of pace, but by the end of its inaugural trip you had to admire the quality of its cast and the scale of its ambition. No, it lacked some of the sheer offbeat qualities that made the original feature film so distinctive, but its parable of class-warfare was essayed with a growing skill and if you stuck it out until the end of that run you were more than likely going to tune in for the next  stage of the journey.

After news of a third season renewal, that second season arrived on TNT this week courtesy of escaping the COVID restrictions affecting so many productions by largely being filmed early last year and being ready to roll out its stock in early 2021… and it picks up precisely where the previous season left us – the revolution being successful but stymied by the unexpected arrival of the train’s original creator Mr Joseph Wilford – presumed long dead but successfully impersonated with audio-tech by Jennifer Connelly’s Melanie for years – until now.

And so let’s address that main event which subverts the ‘Sean Bean must die!‘ maxim of so many productions and inserts the actor into a show after he’s already been (apparently) dead until that point.  Can such a character arrive with the requisite impact?  In the original film the part was played by  (spoilers!) Ed Harris and designed in a very different way with some subtly different intentions. The casting of Sean Bean is quite masterful for more than that sleight of hand. He’s a veteran performer known for rough and ready parts, a figure of distinctive street-level warrior swagger and a noble cinematic vagabond… and here his Wilford channels all of the above, made ever more dangerous because he is also a man of means, position and arrogance, a billionaire monarch with a singular kingdom of steel in an empire of  ice. If Harris was cool, over-pragmatic and detached, Bean’s Wilford is impulsive and driven by ego and revenge.

Diggs continues to be a commanding presence: his Layton remaining a strong character but somewhat back-footed by events. It’s often good drama to watch people who don’t want to be leaders forced to do so and make tough choices and here only a few of his strategies actually work.  Despite Connelly’s Mel being the antagonist for much of the 2019 season, the show has successfully turned her into something of a hero – a difficult task, after all she unexpectedly killed Layton’s far more sympathetic love Josie (Katie McGuinness), a character for whom many fans would have been cheering. We’re reminded of that fact early on in the episode when several of the ‘tailies’ want to settle some scores with collaborators. Now we’re watching Mel force herself back aboard the trains and, despite becoming a prisoner aboard the new arrival, proving herself a key strategist who seems determined to save the passengers of Snowpiercer by any means she can. The fact that she’s now face to face not only with her arrogant mentor but with the daughter (Rowan Blanchard immediately making her mark as Alex) whom she ‘abandoned’ (and who has been raised by Wilford) gives her some more key emotional beats which Connelly handles with aplomb. If Wilford thinks he has the upper hand, he quickly realises it’s going to be far more complicated.

The intensity and pace of events helps paper over some logical cracks (couldn’t Snowpiercer simply detach some of the back cars and escape the grasp of Big Alice – perhaps not, as Wilford seems to gain some control over the electronics and Big Alice could possibly outpace Snowpiercer even if it tried to ‘run’…). Snowpiercer‘s narrative is very much a sum of its parts, its cultural dissection of an enclosed ecosystem in which everyone and everything helps maintain a balance of sorts. With so many moving parts not all can be serviced at once and though there are several characters and storylines put on hold or AWOL for this opener, it’s impressive that so many  do make an appearance and make their presence known. Amongst the sturm und drang there’s also some notes of absurdity – which took a back-seat in the latter part of the first season. Two ‘doctors’ aboard ‘Big Alice’ are clearly several lines of latitude north of quirky in their delivery and the menacing, hulkish ‘Icy Bob’ introduces a more fantastical figure who can survive the sub-zero temperatures. Hopefully these are the kind of additions that will decorate proceedings nicely without side-tracking the grittier aspects into all-out fantasy.

Production values remain high with interesting scenes inside and outside the trains and there’s a real sense of the differences between the desperate occupants of Snowpiercer and the more hedonistic air personified by Wilford. By the time the season two opener concludes, the cracks are forming. Layton’s fledgling democratic revolution has been forestalled by events, Wilford’s absolute authority has been compromised and even the icy wastes hint at some sort of potential thaw. As always the success of the saga will have to be assessed by watching the entire season, but this latest entry promises some interesting developments and shift in loyalties and it’s likely many casualties to come… 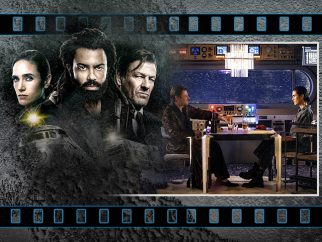