Steve and Dennis are two paramedics working the New Orleans night-shift. Each shift brings depressingly more of the same: overdoses, murders, domestic violence and generally the underside of humanity. Their latest call-outs have yet more fatalities, but despite the drugs involved, they prove more interesting than others, given that one victim seems to have taken a one-way rip down a lift-shaft, another has been bitten by a long-extinct snake and another appears killed with antique sword. The only connection between the cases is that all the junkies appear to have taken a new substance labeled as ‘Synchronic’.

When Dennis’ daughter  Brianna goes missing after taking the drug, Steve heads around town, tracking the sellers down and buying up the limited supply, to make sure no-one else is involved with whatever effect it induces. But the more he starts to learn about the drug and its effects, the more it makes no sense. With his own health failing because of an inoperable brain condition, Steve decides to try a small sample… and the results are far different than he imagined.

It appears Synchronic doesn’t simply produce the ‘visions’ expected, it makes the user physically shift far into the past. Which means Brianna may still be alive. So Steve begins a series of experiments…

For the second time in less than a year, New Orleans appears to be the go-to place for a fix of pharmaceutical products with awkward side-effects.

Last summer there was Project Power (starring Jamie Foxx and Joseph Gordon-Levitt) in which a new drug offered its users the brief ability to indulge in new-found super-powers. It was… okay. Netflix‘s strand of programming sometimes hits the spot perfectly but feels more like first drafts of good ideas that don’t ultimately measure up to the sum of their parts. That was the latter: ambitious but scattershot, flawed but star-packed, a less than pitch-perfect pitch.

This year’s equivalent sf hard candy of choice offers a different, but no less unstable fantastical outcome: now here’s a Big Easy pill that gives the user the ability to travel in time. Like Project Power, the concept is of a drug being distributed without due diligence and the chaos that ensues, but while the Foxx/Gordon-Levitt was more concerned with mimicing its big-screen cousins within terms of budget and scale (if not impact),  Synchronic aims more for arthouse credentials and equally finds its reach slightly exceeds its grasp. The problem with Synchronic is that though there’s a nice (if well-trodden) idea at its heart, it’s style over content  for a story that wants to be appeal to fans of both Back to the Future and Altered States, venturing down the rabbit-hole like an Alice in Wonderland if she had a pass/fail-grade in quantum-theory. AS is so often the case with such a diverse remit, it doesn’t quite satisfy either camp.

Mackie’s star has been steadily rising and on a roll after his Marvel movies (and will soon be seen reprising his Sam Wilson role in The Falcon and the Winter Soldier) and such other varied outings as The Hurt Locker and Altered Carbon. He’s also in another so-so sf Netflix offering this month, Outside the Wire. Jamie Dornan (Fifty Shades…,The Fall) is also a notable performer but  his subdued role in Synchronic doesn’t really stretch him in any way. Ally Ioannides (Into the Badland‘s Tilda) as Brianna is fine, but under-used and reduced to a plot-device.

Pace, in any movie, is of huge importance and mainstream viewers will likely find it initially too ponderous and arthouse fans will find it ultimately light-weight. The set-up part of the story moves painfully slowly, two-thirds of its running-time spent doffing its hat to Lynchian and Cronenbergian affectations in its editing and visuals and building up character-dynamics that don’t go as deep as the set-up promises.  In what could be told and shown better in half the time, we learn how Steve is a decent guy but a one-night-stand womaniser – still  suffering from memories of what happened to him during Katrina.  Dennis is his long-time buddy trying desperately to be the father and family-man he knows his wife and daughter deserve and he wants to be, but feeling becalmed and trapped. Their various journeys out into the seemingly eternal-night of  New Orleans is getting as nihilistic for them as it is for us, exposing moments of others’ prejudice, racism, desperation and apathy.. and even the friends own fault-lines and their ways of dealing with it.

By the time we find out that Steve has an in/convenient fatal flaw in his brain’s under-developed pineal gland (that in true cinematic terms is dangerous, growing but could give him weeks or decades to live) the film simply seems like a journey into neon-hued and occasionally abstract depression. If Christopher Nolan is all about the clinical, then this is the opposite: organic to a fault. When the firmer narrative shift into bonafide genre territory eventually comes to explain the imagery we’ve seen, there’s indecision on whether to make it make fit into some whiteboarded, explainable paradigm of time travel or simply immerse itself into something more ethereal, cosmic and less tangible. Such dueling narratives seem to be the hallmark of directors Aaron Moorhead and Justin Benson. There are moments when you think the film will commit itself to more solid themes rather than just tick them off. There’s times in the present and past that speak to innate racism that are offered up then discarded and Steve or Dennis’  unsatisfied personal lives never really go anywhere other than them realising such and that’s disappointing.

For story that admirably, if painfully slowly, tries to establish some internal logic set of rules to govern its plot, even time-travel movie afficianados will be scratching their heads with all the elements that don’t make much sense beyond the initial pitch of a time-travel pill. Yes, Steve pragmatically records each step of his travels and his investigation of the pill’s power to ensure there’s some proof left behind should things go wrong ( a step many films ignore to set up their peril), But much is made that even the distance of a few feet in your ‘starting-position’ can make centuries or millennia-differences  to the destination, yet there’s no further rhyme or reason to the order of those co-ordinates. What can be brought back seems arbitrary and when Brianna disappears – setting up the urgency for everything thereafter – the subsequent clue she might have been able to leave to her where/whenabouts for Steve and Dennis to find turns out to be a massive coincidence rather than predestination.

There’s two or three interesting films in Synchronic’s mix and more ideas besides, but what feels like it could be walk outside the normal lines quickly becomes on one hand too ambitious  and and on the other merely pedestrian and the result meanders so much that by the time we’re done, the destination isn’t as interesting as the journey promised. 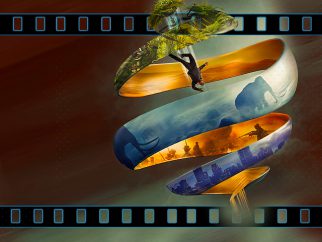