The first part of Marvel's 'Phase 4' era, 'Wandavision' is Pleasantville meets The Truman Show - with a sinister twist...

Wanda and Vision are the new couple in town…. and golly, they’ve already made something of an impact, attracting the polite scrutiny of their neighbours. It seems that they will have to be very careful to hide the fact she has special powers and he’s a robot… and all those crazy efforts at ‘fitting in’ will no doubt cause no end of hilarious mayhem!

But wait…what does the company Vision work for actually do?  Why can’t Wanda and Viz remember why they moved here or how long they’ve been married? What’s the significance of the heart on the calendar and, most importantly, can everyone survive a last-minute misunderstanding over a dinner with the boss?

It’s very hard to review Wandavision based solely on its opening two episodes. Never intended to be the first of the Marvel/Disney+ shows to launch, it feels a particularly off-beat, high-concept and somewhat risky proposition to lead off with a show that, on its surface, is devoid of any of the Marvel outings to date. Yes, there’s Paul Bettany and Elizabeth Olsen reprising their roles but short of their faces and character-names the whole presentation is adrift from what you’d normally expect. No cosmic battles, nor obvious villains, here, merely domestic doldrums? What the heck?

There’s little argument that its recreation of the early Americana sitcom format is spot-on perfect. From fantastically-designed sets, the placing of the laughter track and the sheer choreography of camera-work and actors’ delivery, it brings to mind a series of monochrome shows that were milestones along the way (and are still familiar as classics today). Almost all the first episode and much of the second keeps within those template boundaries – most notably echoing The Dick Van Dyke Show and Bewitched –  and if not for the casting and the outlying sense of knowing its ‘too right’, the show feels like you could have lifted it from the archives wholesale.

But given the premise, it was a savvy move to release the two opening episodes together, introducing the bewildering conceit and only then gently creating depth and distrust in it… the realisation that far from being safe and familiar, there’s something very unsafe and unfamiliar skittling around the edges that has yet to be fully revealed. And though it perhaps takes just a little too long to begin truly fraying the edges of its faux-tapestry, the real strength of Wandavision is in that very subversion… simultaneously enjoying the simplistic, nostalgic foreground in the moment then the awkward side-glance to clues of something all too contemporary is coming. There was initial talk of releasing all the nine episodes of the series together and, in all honesty, that might have worked better as there will be some who watch these two openers (albeit running to just over an hour in total) and don’t see the meta-mystery and will simply think it’s not for them.

However it does seem that the balance – between the surreal and the more traditional MCU we know and love – is likely to pivot as we proceed through the weeks and we get better clues.  The SWORD logo (the off-world sister-entity to SHIELD in the Marvel universe) has cropped up a few times, so expect that to be expanded. Other elements from the comics, including the suburban setting (from the acclaimed 2016 Vision comic created by writer Tom King and artists Gabriel Hernandez Walta and Mike Del Mundo) and Wanda’s possible ‘impossible’ pregnancy (from an earlier, very convoluted and decades-spanning comics storyline in which Wanda’s powers and grasp on reality became a problem) look to be the main sources of inspiration so far and it’s a rich seam to mine. But there’s further planning: fans may also be aware that Teyonah Parris who seems a little unsure about her name in the series will also play the grownup Monica Rambeau in Captain Marvel 2 and given that we know that Wanda will feature as a character in the Doctor Strange sequel In the Multiverse of Madness (currently landing in 2022), we may not get every answer we want quickly.

Olsen and Bettany handle everything thrown at them with aplomb and just the right amount of self-awareness to sell the funny and the serious. In the supporting cast Kathryn Hahn plays the nosey neighbour Agnes, one who’ll continue to feature even as each ‘era’ ends and it’s a character viewers should definitely keep on their radar in a case of definitely ‘more than meets the eye’.  Fred Melamed plays Vision’s hard-to-impress boss and his wife is The 70s Show‘s  Debra Jo Rupp in roles straight out of the 50s. We should also be seeing a few MCU alumni in the mix, as the weeks continue.

Though originally planned to debut after the likes of The Falcon and the Winter Soldier, in many ways WandaVision comes at the perfect time. Normally, Marvel is aching and arching towards its big-screen releases, but here’s a show arriving that’s not only built specifically for the format of television but in an era where almost every cinema is closed and tv reigns supreme once more. WandaVision won’t be for everyone  – the two sides of its story-format each having their own merits but sometimes clipped to accommodate the other – it demands some patience and willingness to go with the flow for a while. But as a slowly-evolving strange and unique entry, a more sinister take on the suburban observations and stylistic tints of  Pleasantville, it’ll likely have you hooked until the answers are delivered, although those revelations will need to build and grow with added momentum to satisfy… 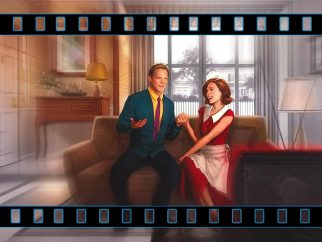 Captain, my Captain? What are odds on Evans return?